In Need of Soup 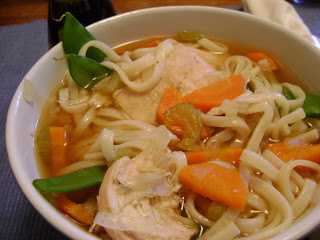 Ever since the weather turned cold, I have wanted a good bowl of Asian-style soup. The craving started when I got my first head cold of the winter season. Of course, then I didn’t feel well enough to cook anything.

About the same time, I saw Nigella Lawson prepare her Noodle Soup for Needy People on her Nigella Express television show, which is shown in the on the Cooking Channel. It was just what I wanted!

This week I pulled out her cookbook by the same name and found the recipe. She introduces it by writing:


“I have to say, to be prescriptive about a noodle soup seems to be against the ethos of what you're actually cooking. When I need a noodle soup, believe me I am in no mood to start weighing and measuring. I heat some broth, of some description or other, and throw in a variety of vegetables that are skulking about in the fridge and the most soothing noodles I can find…But anyway, I throw down a blueprint here. Don't get caught up in it, but follow it if it feels helpful.”


I took Nigella’s words to heart. I could make her Needy People soup with whatever I had on hand!


As I mentioned in my last post, my husband, Michael, doesn’t like Asian-flavored dishes. However, he does like my thrown-together chicken soup. There is no real recipe for this concoction. I just put chopped onions, celery and carrots into a slow cooker, add a couple of whole garlic cloves, slightly crushed, a carton of chicken broth, bay leaves, dried thyme, salt, pepper, and 3 or 4 boneless chicken breasts (usually still frozen.) I turn the temperature to low and cook until everything is done. Then I add some egg noodle at the last minute and let them cook until soft. It’s easy! 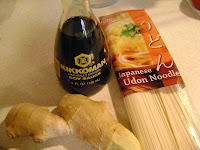 This time, I cooked some udon noodles in bowling water until done. For the last couple of minutes of cooking, I added a few snow peas. 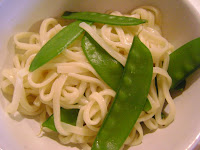 In Michael’s bowl, I only added some of the noodles and then ladled the chicken soup over the top. In my bowl, I added the noodles, snow peas, and some grated fresh ginger. I spooned in the chicken soup, and then added soy sauce until I got the flavor I wanted. Perfect! 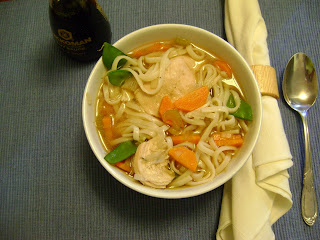 Here is Nigella’s recipe for you to try, but don’t be afraid to let inspiration dictate what goes into your soup.


Cook the noodles according to packet instructions and while the water is boiling fill a nearby saucepan with stock, brown sugar, star anise, ginger and soy sauce. (When the noodles are done, just drain them and put half in each bowl.)


When the flavored stock comes to a boil, add the vegetables. They should be cooked before 2 minutes are up.


Pour half into each bowl, over the cooked and drained noodles and sprinkle with cilantro.
Posted by A Sunflower Life at 5:41:00 PM

Love this type of soup - it has the power to bring world peace and mend broken hearts. Yum!