This is my new favorite autumn quick bread. I adapted this recipe a few weeks ago from one I found in The Apple Lover’s Cookbook by for an article on quick breads that ran in the Topeka Capital-Journal. What I like about this bread is its yeast-bread-like quality, which differs from most quick bread recipes. I serve it cut into wedges, much like a scone. Be sure to use a tart apple when making this bread, such as a Granny Smith. 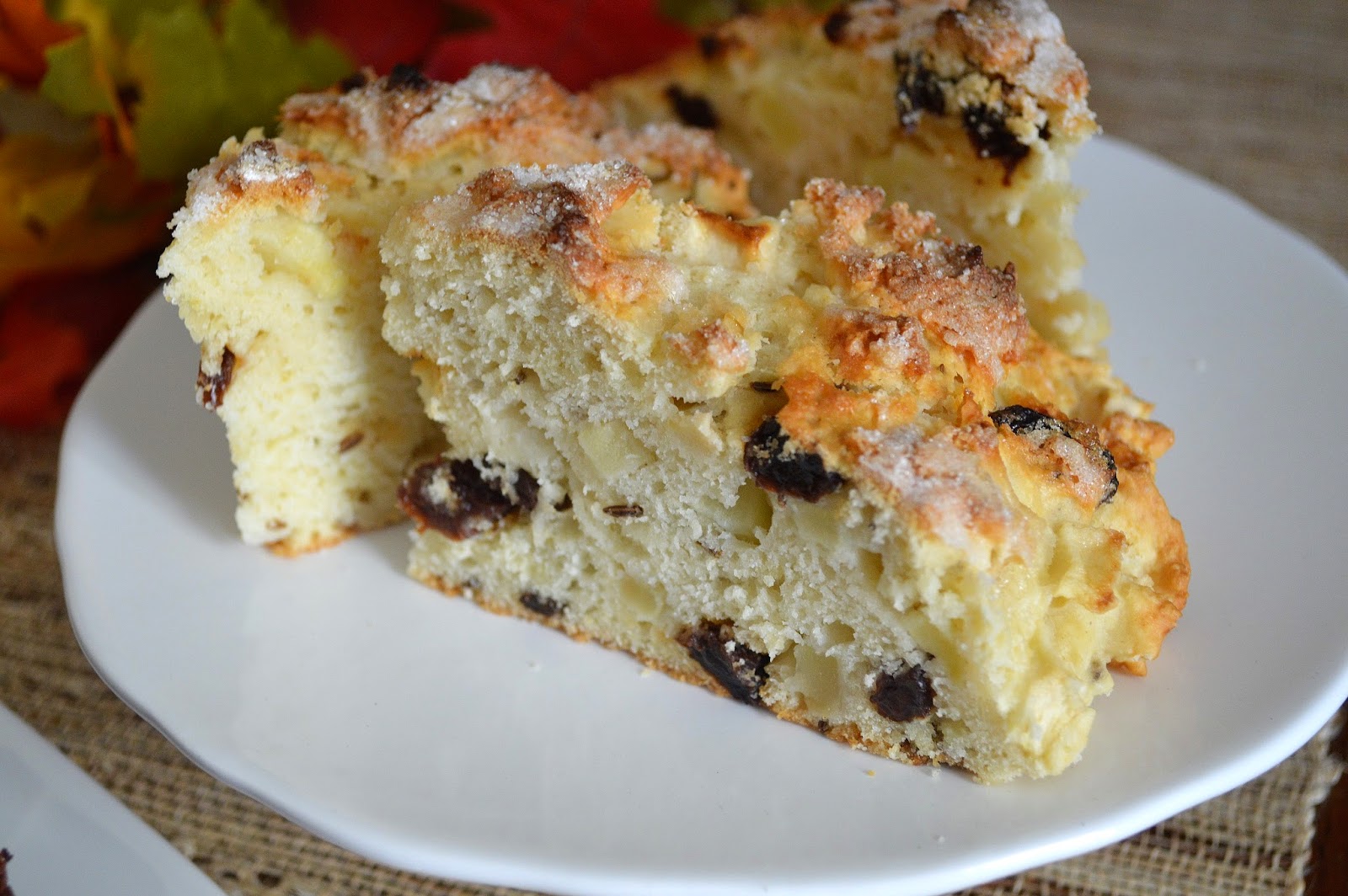 Preheat the oven to 375 degrees F. Spray a 9-inch cake pan with non-stick cooking spray. Set aside. If you haven’t already done so, melt the butter and set aside. Also, if you are substituting the milk-vinegar mixture for buttermilk, you will want to add the vinegar to the milk now and set aside. Before using, remove 1 tablespoon of the milk mixture to create the correct measurement.

In a large bowl, blend together with a whisk the flour, sugar, baking powder, salt and baking soda. Pour in the melted butter and mix with a spoon until the butter is well distributed throughout the flour mixture. Make a well in the middle of the flour mixture and pour in the buttermilk. Fold the milk into the flour mixture until it is just combined. Fold in the apples, raisins and caraway seeds.

The mixture will be very sticky. Flour your hands and shape the dough into a ball, and then place it in the prepared cake pan. Flatten it slightly, but not so much that it fills the pan. The dough should not reach the edge of the pan. Sprinkle the top with 2 teaspoons of sugar.

Bake for 45 to 50 minutes, or until the top is browned and a toothpick inserted in the center comes out clean. Cool the bread in the pan on a rack for 15 minutes, and then remove the bread onto the rack to cool for at least another 15 minutes. 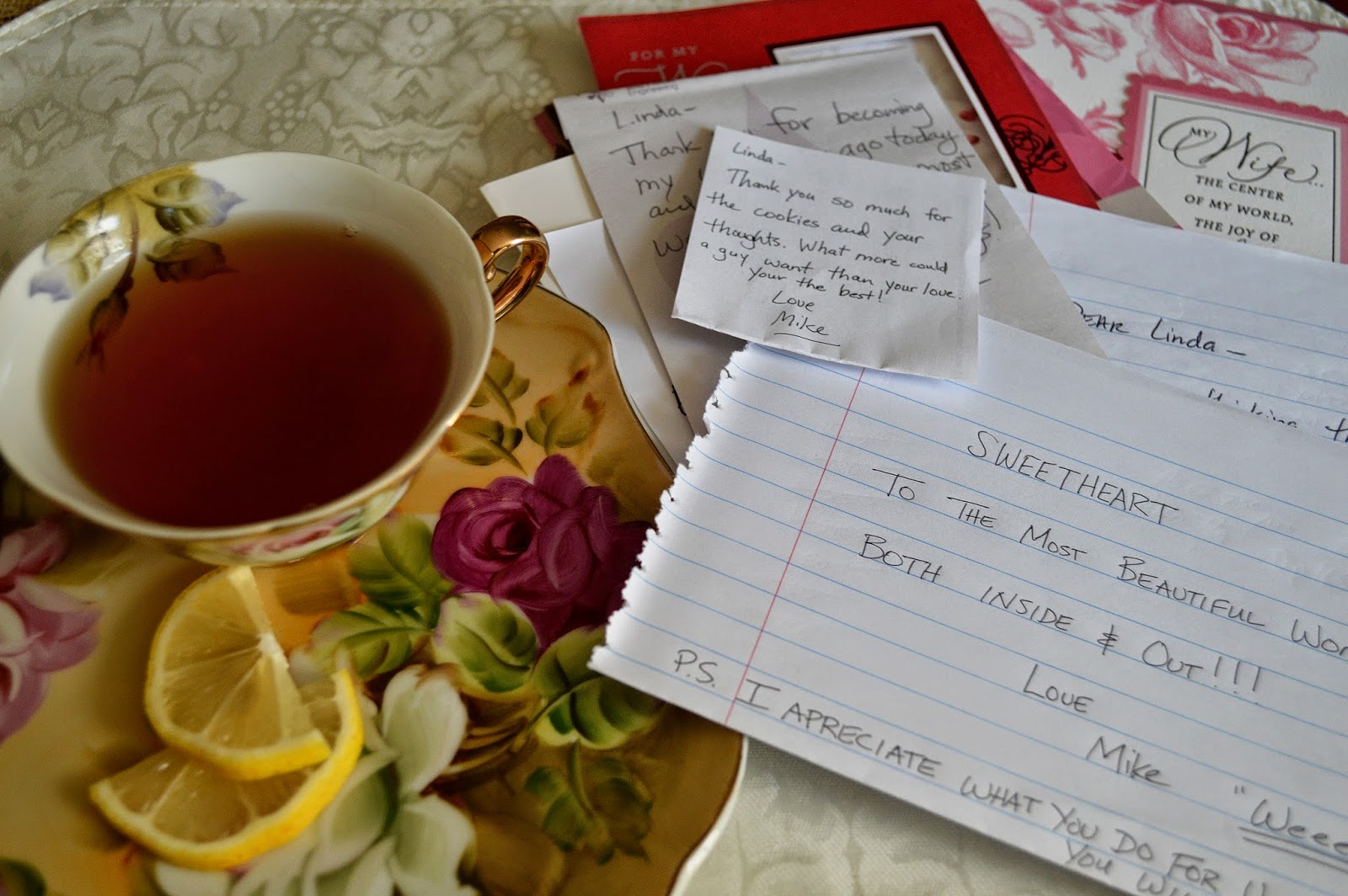 Currently I am reading Somewhere Safe with Somebody Good, which is the latest in the Mitford series by author Jan Karon. I always enjoy the books in this series. The settings and characters are warm, comforting, and full of life. I feel uplifted and happy at the end of each one.

In this particular edition, the main character, , and his wife, , agree to write regular love notes to each other. They feel it is a good way to increase their love and the sense of intimacy in their relationship.

The idea made me smile.

The Picky Eater and I wrote many love notes to each other. They weren't planned, but were spontaneous gestures of love and caring. He worked as a courier overnight and often, when I missed him while alone in the late evening, I wrote him a note and left it on the dining room table. In return, there were many times I woke up to a surprise note left for me that he penned before coming to bed. 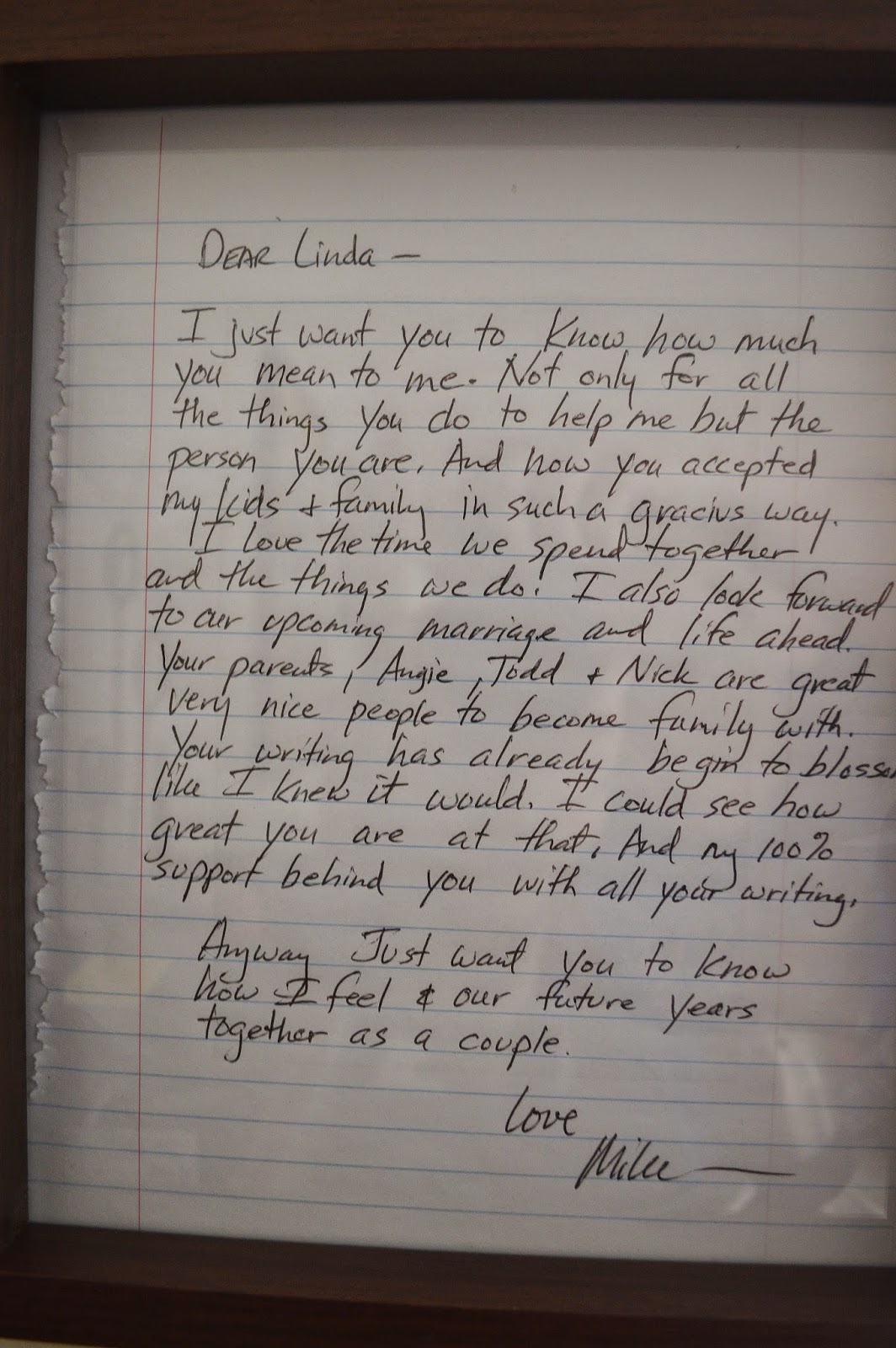 This one in the frame was very special. He wrote it a few weeks before our wedding day. After reading it, I immediately hung it up with a thumb tack over my desk so I could see it anytime I needed encouragement. Not long ago, I framed it to keep there always.

Each year we celebrated the anniversary of our first date, which also happens to be Veterans Day. Part of our celebration was to read together the emails we exchanged in the early days of our relationship, first through Match.com and, after that first date, directly to each other. Many were written after arriving home from a date, expressing the wonder and joy of finding new love.

It has been three months since I lost The Picky Eater—actually, 14 weeks this Thursday. Many times when I miss him the most and need to feel his love, I pull out his notes to me. They are some of the greatest gifts I have from him. Also, as I started going through his things, I found the ones I wrote to him, which is another loving gift. 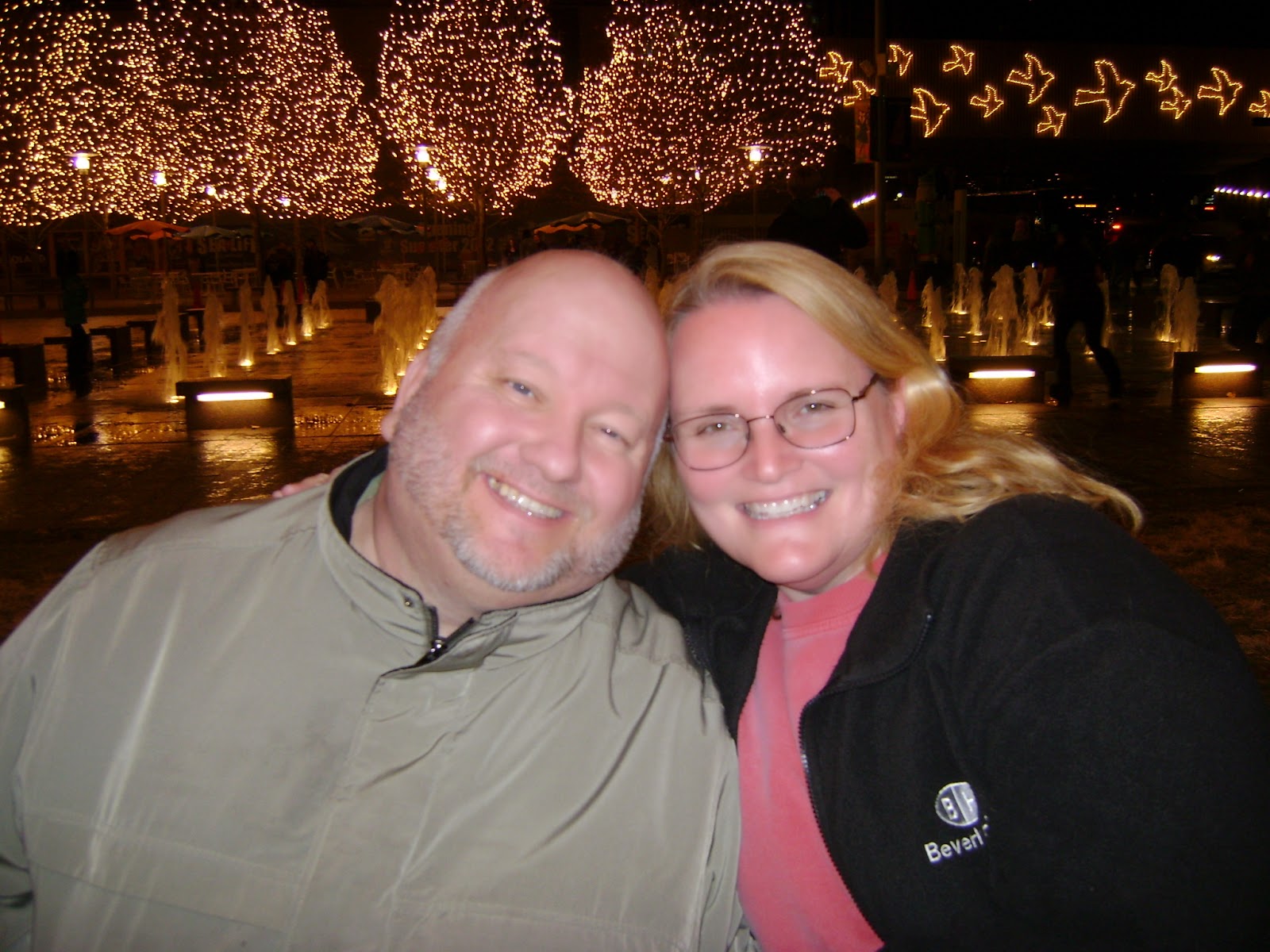 I want to encourage you to write love notes to the person (or people) who means the most to you. They don’t have to be fancy or grammatically correct. Just write from the heart. Not only do these notes brighten the moment, but they are also a tangible way to show love that can be enjoyed again and again. 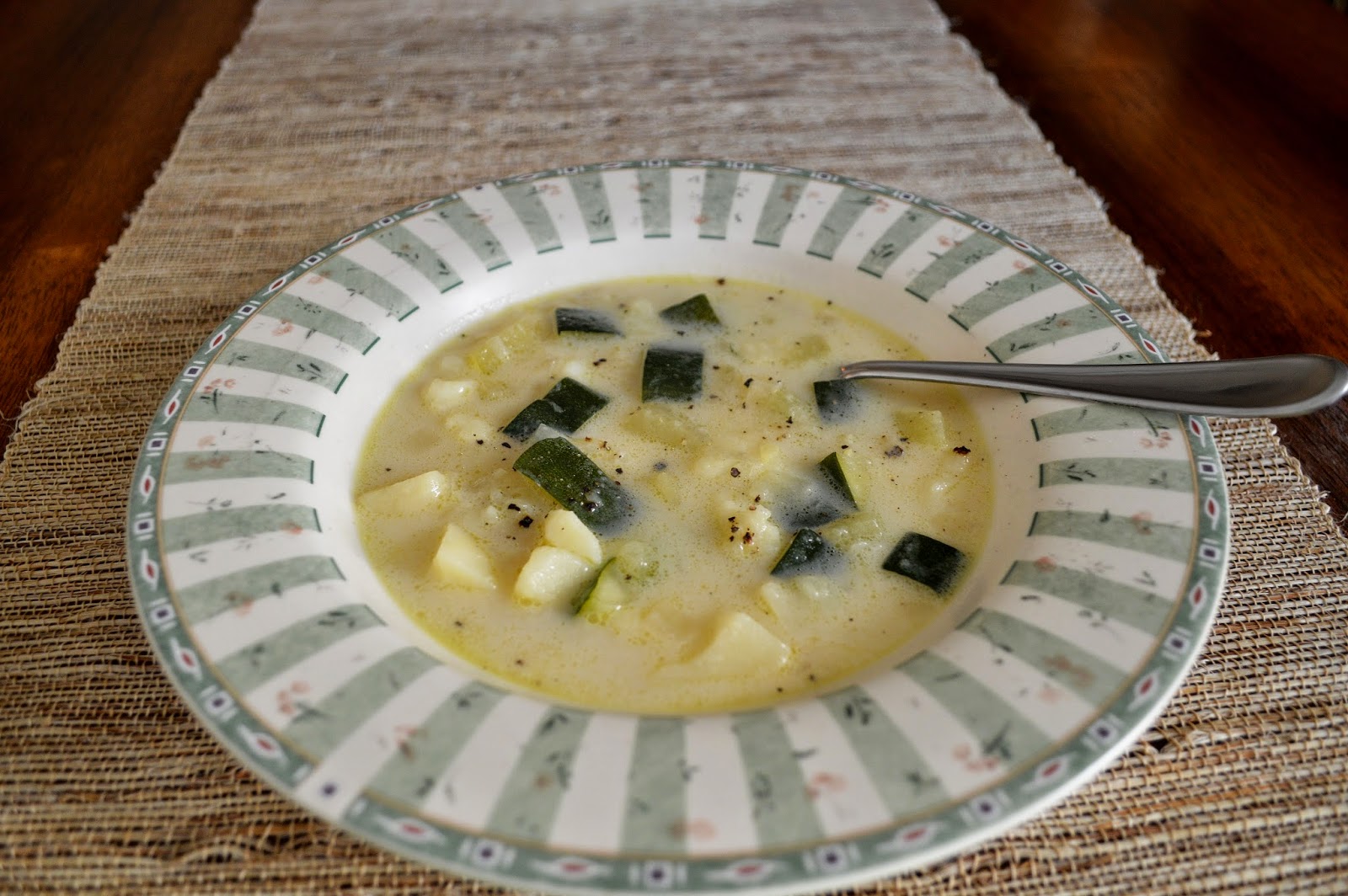 A few weeks ago, I went to one of the most enjoyable dinner parties I've ever attended. My friends, and , host an occasional international dinner for family and friends. They pick a country and create a menu featuring its native dishes.

What made this dinner party a bit different from the norm was the guests all joined in to help prepare the meal! We gathered together in the kitchen and divided up the recipes according to our culinary skills. The camaraderie was wonderful as we all worked on our particular dishes while chatting about food and life. Then we settled into the dining room to enjoy our efforts.

On this particular night, the theme was . No, kangaroo meat wasn't on the menu, but there was a wonderful meat pie and a spinach recipe appropriately named “Spinach Like You've Never Had.”  (It was delicious!.) Vegemite was used in a baked cheese pinwheel so everyone could give this traditional Aussie product a try, and I mixed up damper bread, which is similar to Irish soda bread and traditionally made over a camp fire. (I want to try this recipe again—I wasn't happy with the results, even though everyone else seemed to like it.) 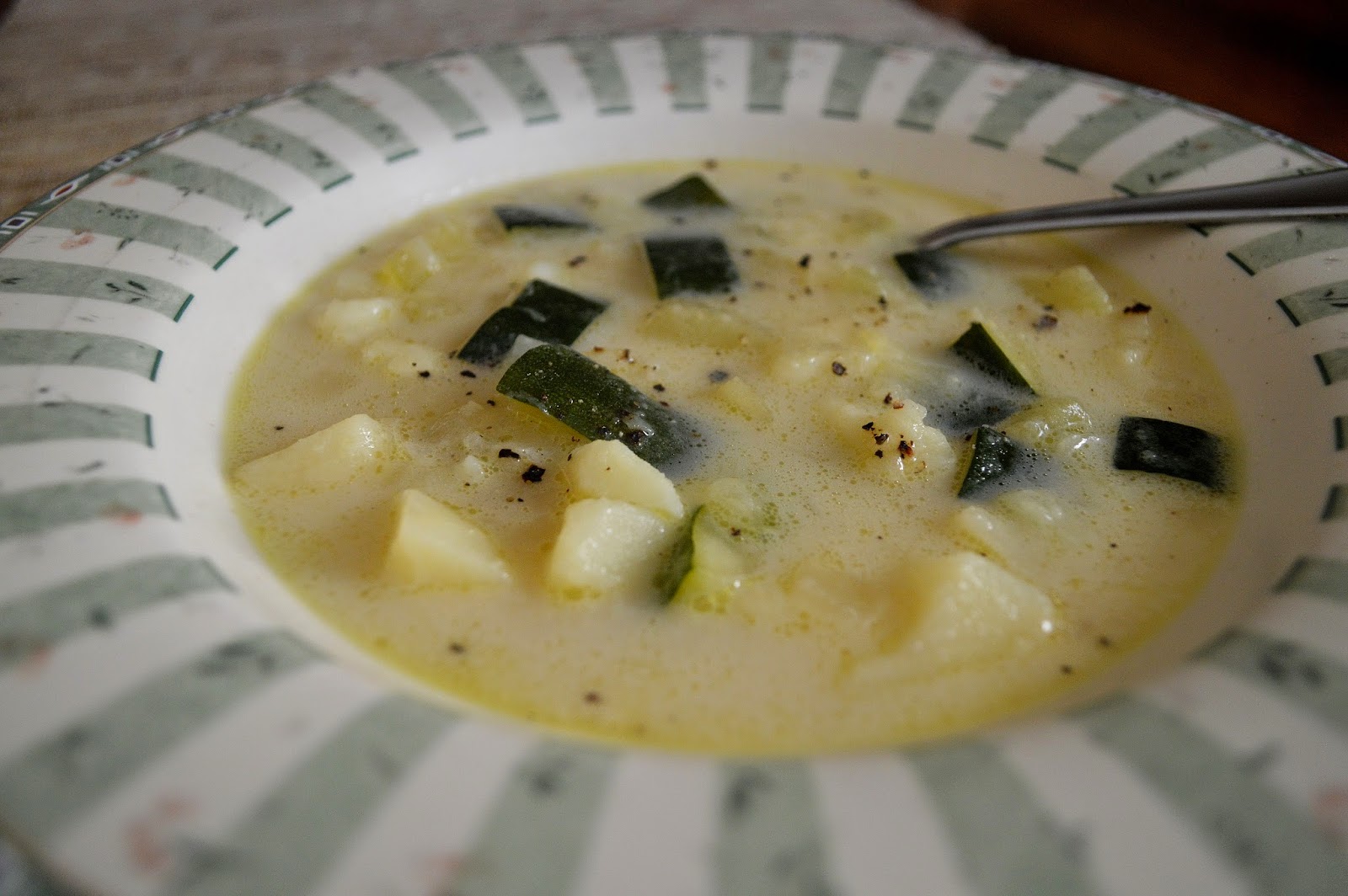 The recipe that stayed with me long after the meal was over was the potato-zucchini soup. To be honest, I’m not certain just how Australian this soup is, but it's delicious. (Aussie readers, please comment!) It reminds me of my favorite potato-leek soup recipe from Julia Child.

The recipe is easy to make and quick enough for a weeknight meal. Just add some bread, and you’ll be all set!

This recipe is adapted from one found on the Australian AllRecipes website. It calls for the use of bouillon cubes and water, but you could certainly substitute chicken or vegetable stock instead. Also, the original recipe said to puree the soup before serving, but I like a more rustic dish. So I only peeled half the zucchini, and then I used a potato masher to smash some of the potato and zucchini.

1 tablespoon unsalted butter
1 medium onion, diced
2 to 3 cups diced zucchini, half peeled and half left with the skin 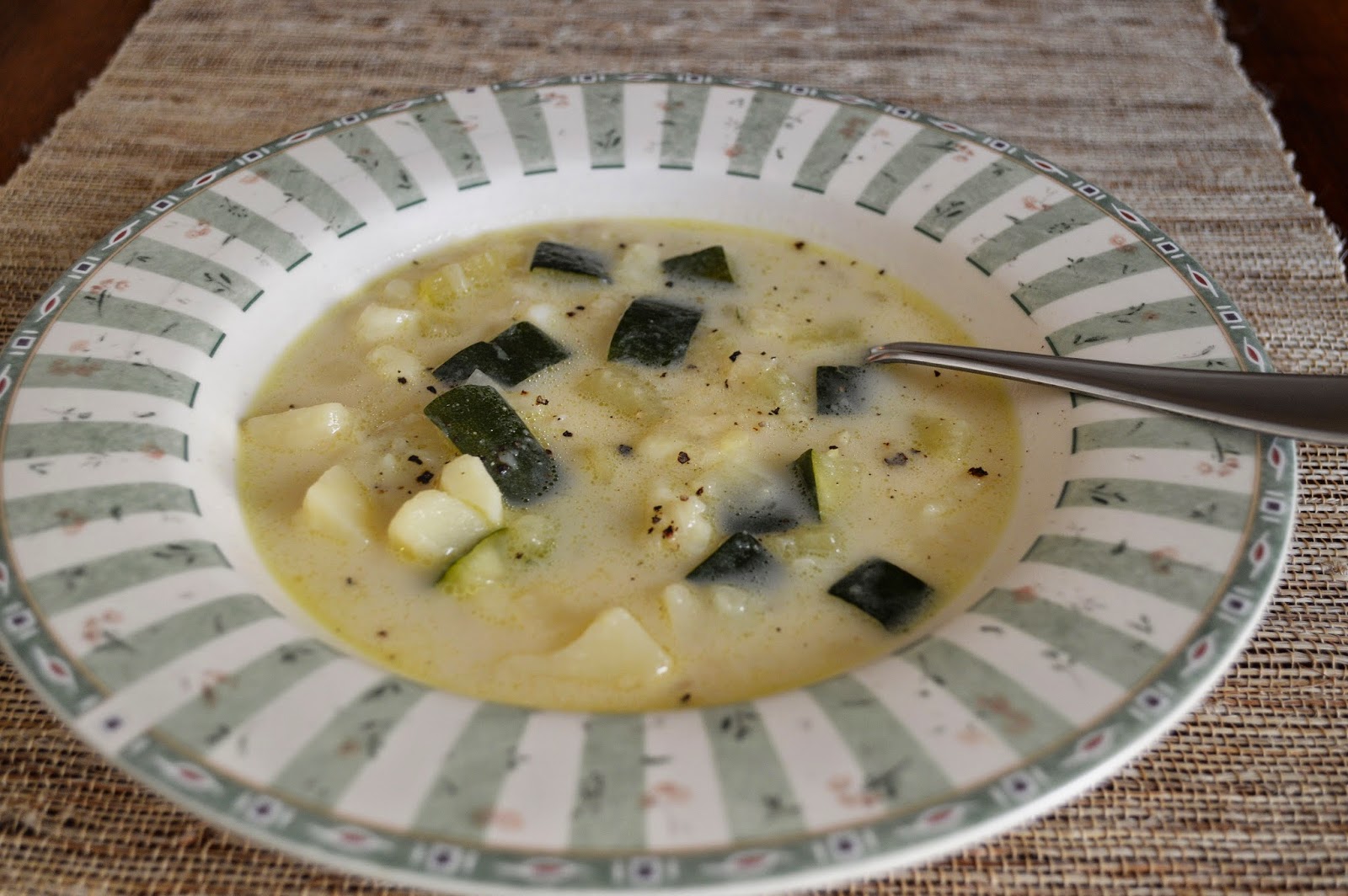 In a Dutch oven over medium heat, melt the butter. Add the onions and saute to soften. Add the zucchini and
saute to soften slightly, and then add the potatoes. Next pour in the water to cover and add the bouillon cubes. Bring up to a boil, and then reduce the heat and simmer until the potatoes are tender, about 15 minutes.

Mash the mixture with a potato masher, leaving some of the potatoes and zucchini whole. Add the cream and salt and pepper. Serve.