Fudgey Brownies in a Jar 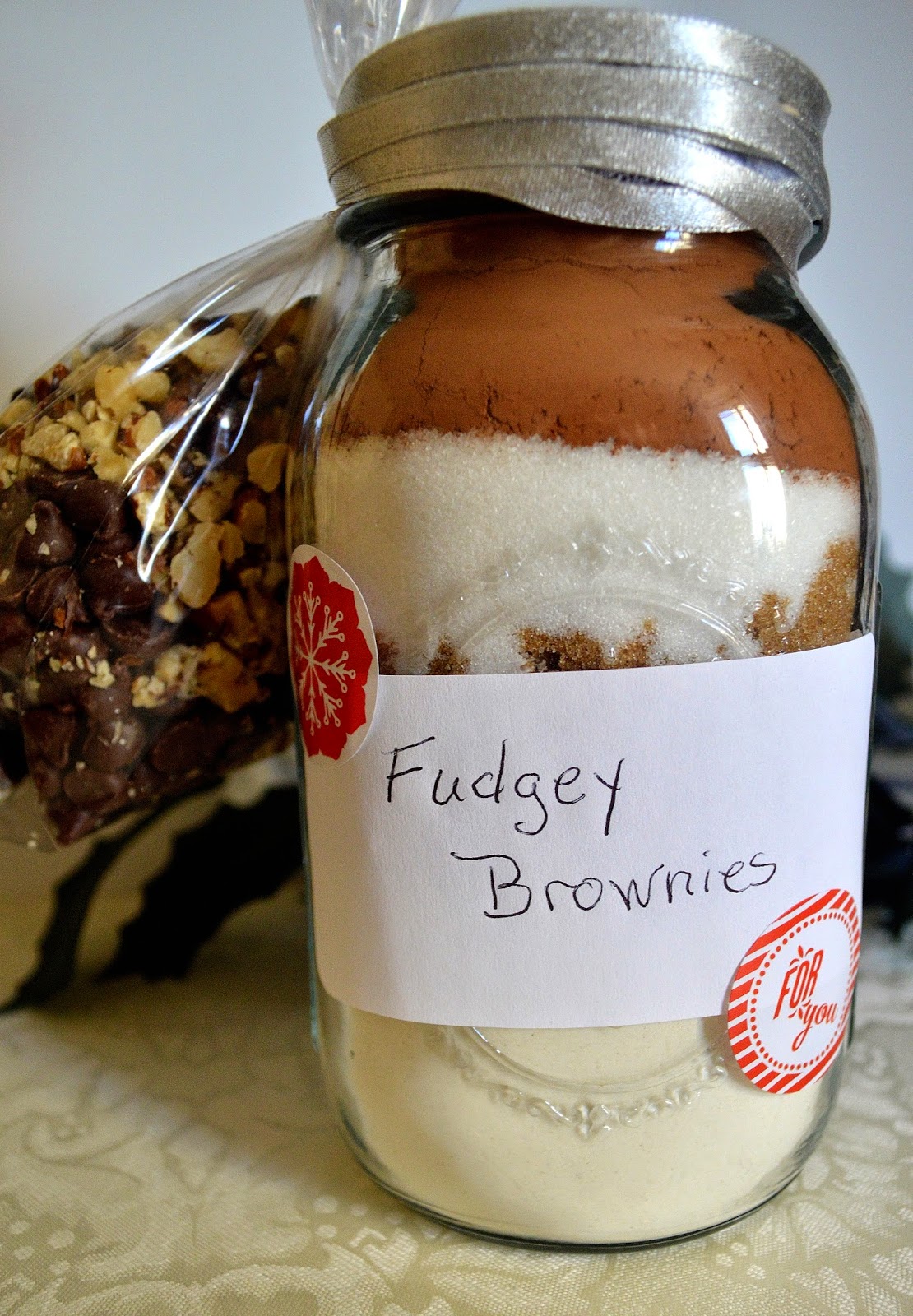 I begin this post with a disclaimer: I’m not a craft person, which I’m sure is evident by this photo. Cooking I can do. Dressing up gifts? Not so much.

Trust me, anyone who receives this gift of Fudgey Brownies in a Jar won’t care how the packaging looks once they taste the results. These brownies are wonderfully chewy and chocolaty—just what brownies are meant to be!

When assembling the jar, I put the chips and walnuts in an attached bag since they are added after the batter is mixed. If you’re not sure the gift recipient is a fan of nuts in brownies, just omit the walnuts and add more chocolate chips. You can also give a mixture of dark and white chocolate chip with the jar. Be sure to include the baking instructions, either on the gift tag or an attached recipe card.

Whether you give the jar as a gift or keep it in your pantry, this brownie mix is great to have around whenever the chocolate craving strikes.

Additional ingredients:
10 tablespoons unsalted butter, melted
1/2 cup water
2 eggs
1 teaspoon vanilla
To make the jar: Into a 1 quart jar, place the flour, baking soda and salt. Whisk together to combine. Add the brown sugar, granulated sugar, and cocoa powder. Place the lid on top. In a plastic bag to go with the jar, place the chocolate chips and walnuts.
To make the brownies: Preheat the oven to 350 degrees F. Spray a 13 x 9-inch baking pan with non-stick cooking spray. Set aside.
Pour the ingredients from the jar into a large mixing bowl. Whisk together to combine. Add the additional ingredients and stir until just combined. Fold in the chocolate chips and walnuts.
Pour the batter into the prepared baking pan. Bake for 35 to 40 minutes or until the brownies start to pull away from the side of the pan. Cool in the pan on a wire rack. Cut into 24 squares before serving. 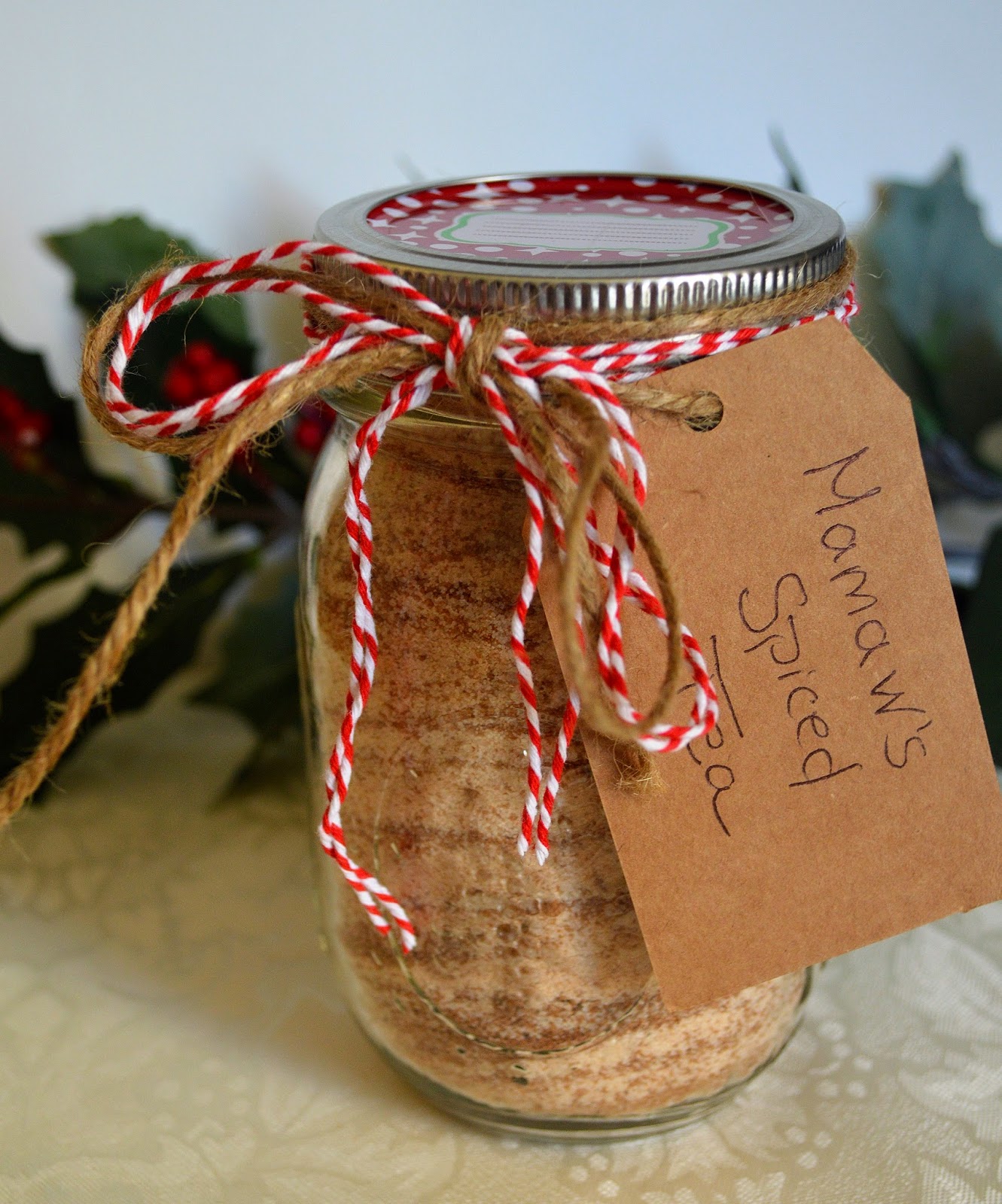 Recently, I was looking in my Mamaw’s recipe box for a favorite Christmas recipe when I came across this one for her Spiced Tea Mix. I thought, “What a great, old-fashioned Christmas gift alternative to hot chocolate mix.”

According to the note Mamaw made on the card, she got this recipe from a friend in 1969.  The mixture is reminiscent of a time when instant tea and Tang orange drink were in style. I remember enjoying warm cups of this fragrant drink at Christmas time, though she may have had it on hand all year round.

I love giving gifts that also have comforting memories to share.

To make the jar: In a bowl, whisk together all of the ingredients until well combined. Pour into jar and cover with lid.

To make the tea: Poor 1 cup boiling water into a mug. Add 2 heaping teaspoons of the tea mix and stir to combine. 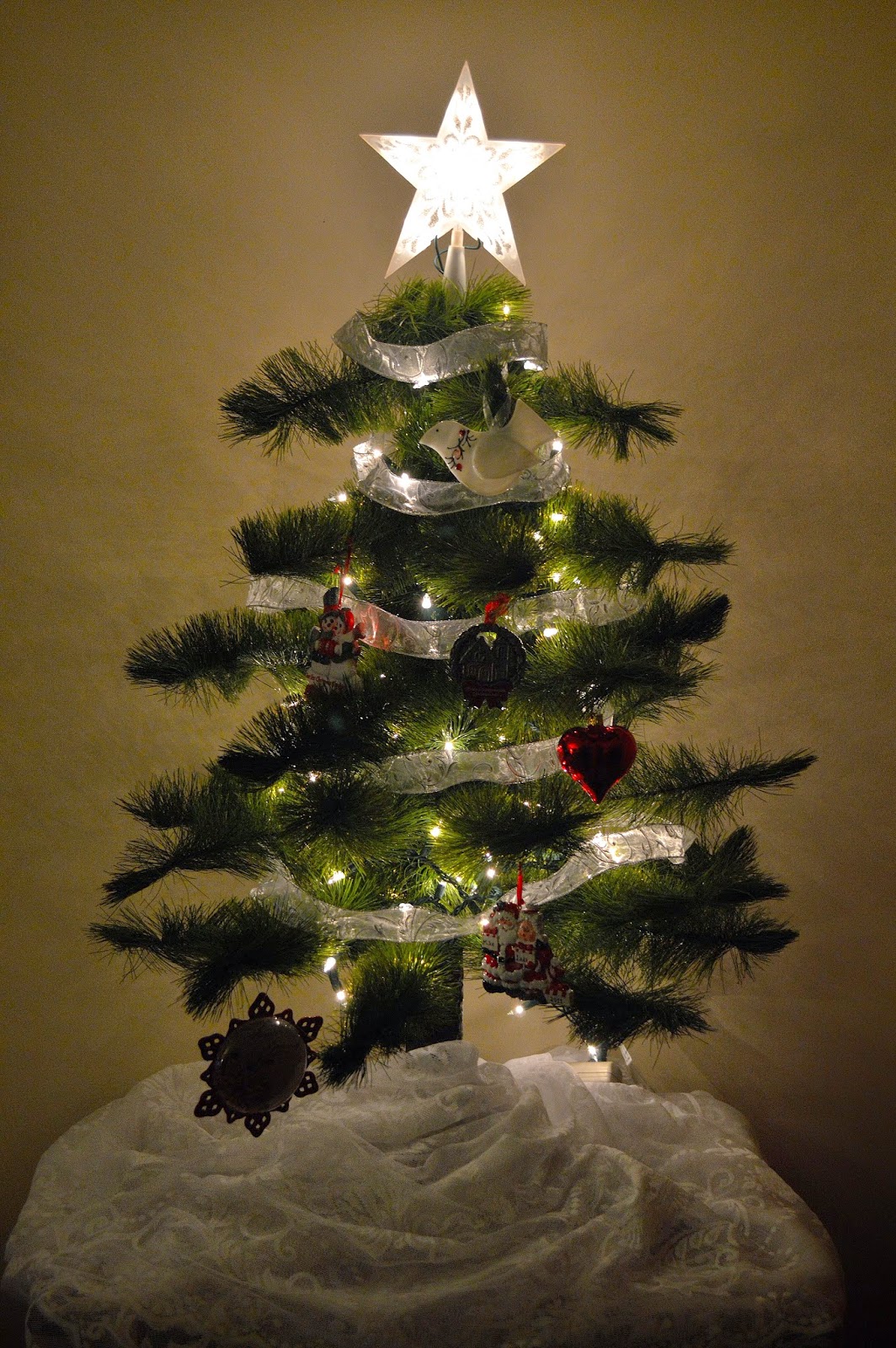 There’s a story behind the tree. It is an artificial one The Picky Eater had when we met. He said he bought it in 1979 from a store that is no longer around. It is the type where you match the color-coded branches to the pegs in the center pole. He adored that tree. 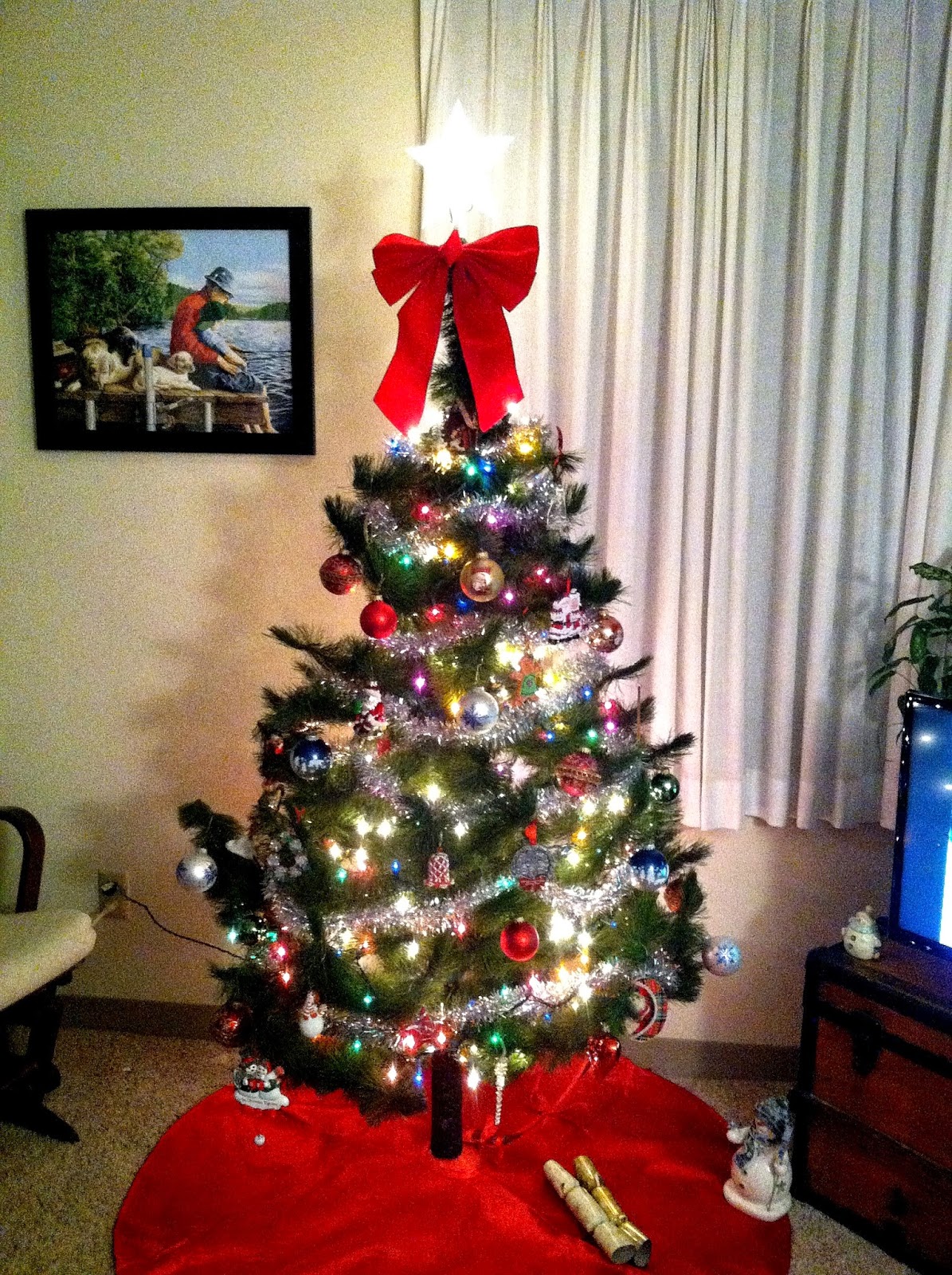 I hate that tree! It is a pain to put up, looks straggly no matter how much adjusting I do, and it is covered in dust from decades of Christmases past. The base is cracked. One Christmas the tree kept falling over (once on top of my nephew!), so I had to tie the base together with kitchen twine to keep the tree upright.

I tried to convince The Picky Eater of the benefits offered by a modern, pre-lit tree, but he wouldn't hear of it. So each year, we put it up.

As my first Christmas without The Picky Eater approached, I knew I didn't want to put up that old, dusty tree. However, I couldn't bring myself to get rid of it either.

So, I compromised. I took the top section of the tree, which is all in one piece, and after some juggling and innovative adjustments, set it into the twine-supported base. Then I decorated it with our special ornaments.

In the early days of our relationship, The Picky Eater and I were shopping at in with his sister and family. There was a store full of Christmas decorations, and he said, “Let’s go in and pick out a special ornament just for us.”

Ever since, we bought an ornament every year just for us. 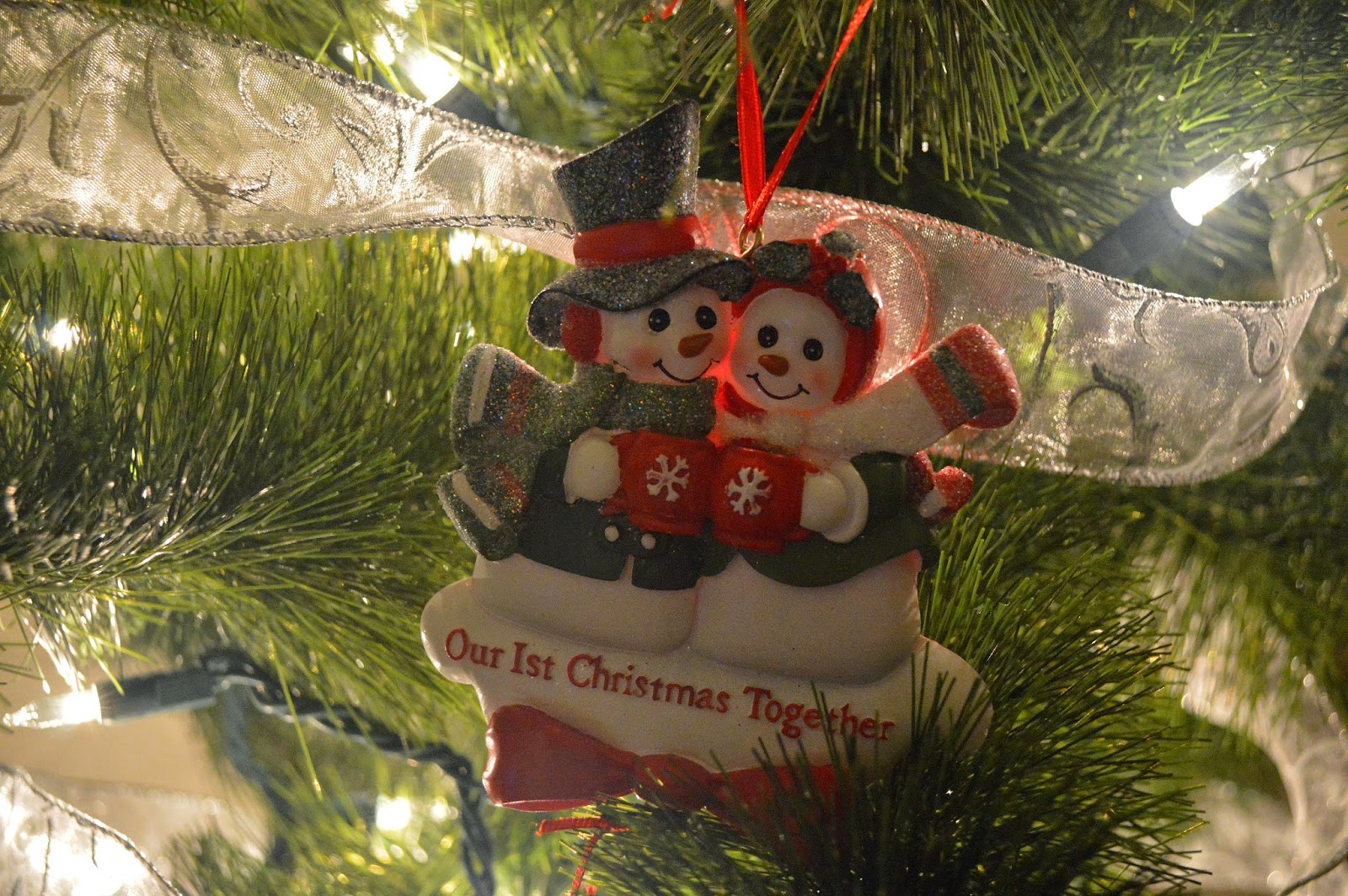 This is that first one from Christmas, 2010: 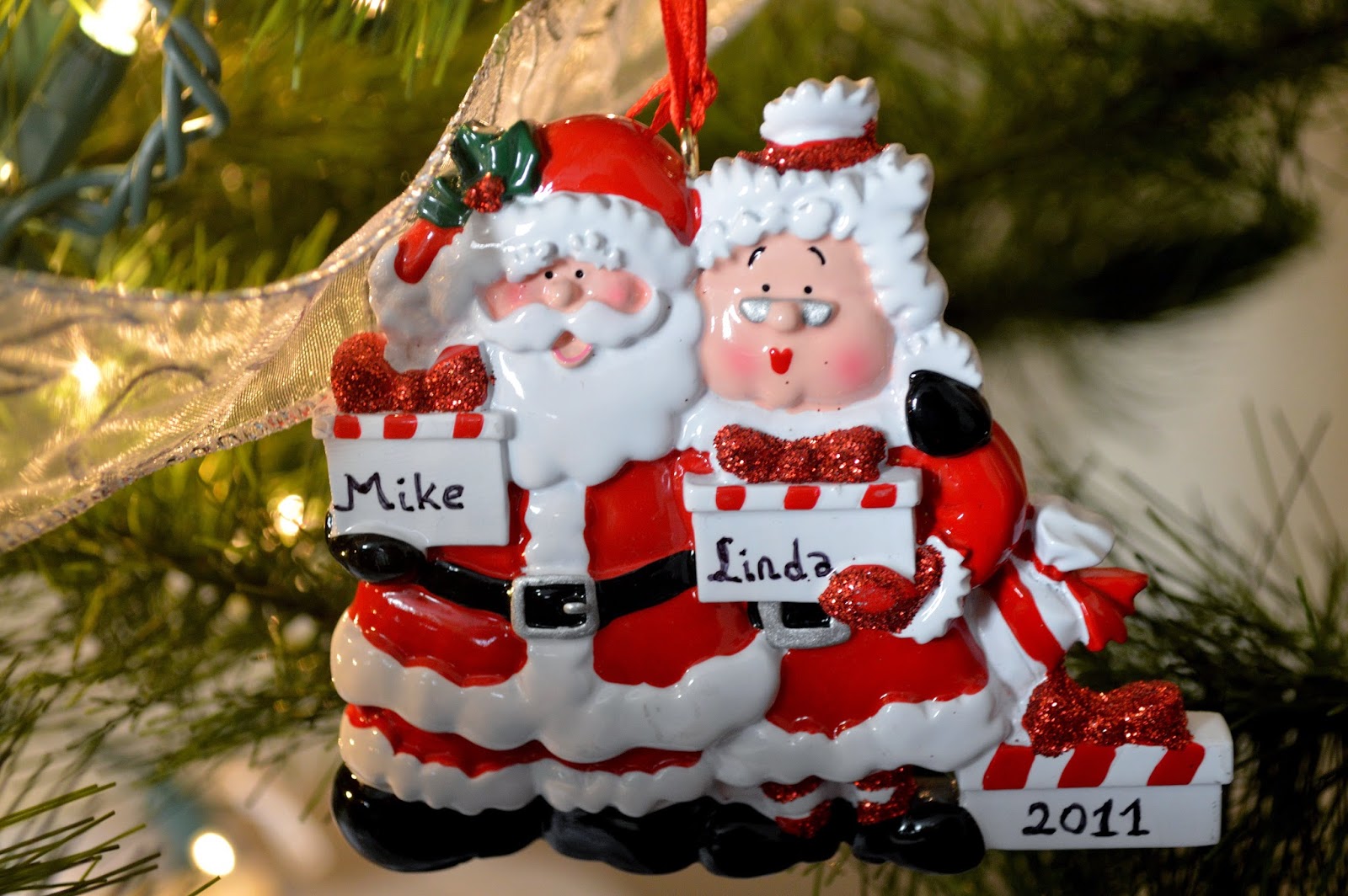 This second one was bought a couple of weeks before our wedding on Christmas Eve, 2011: 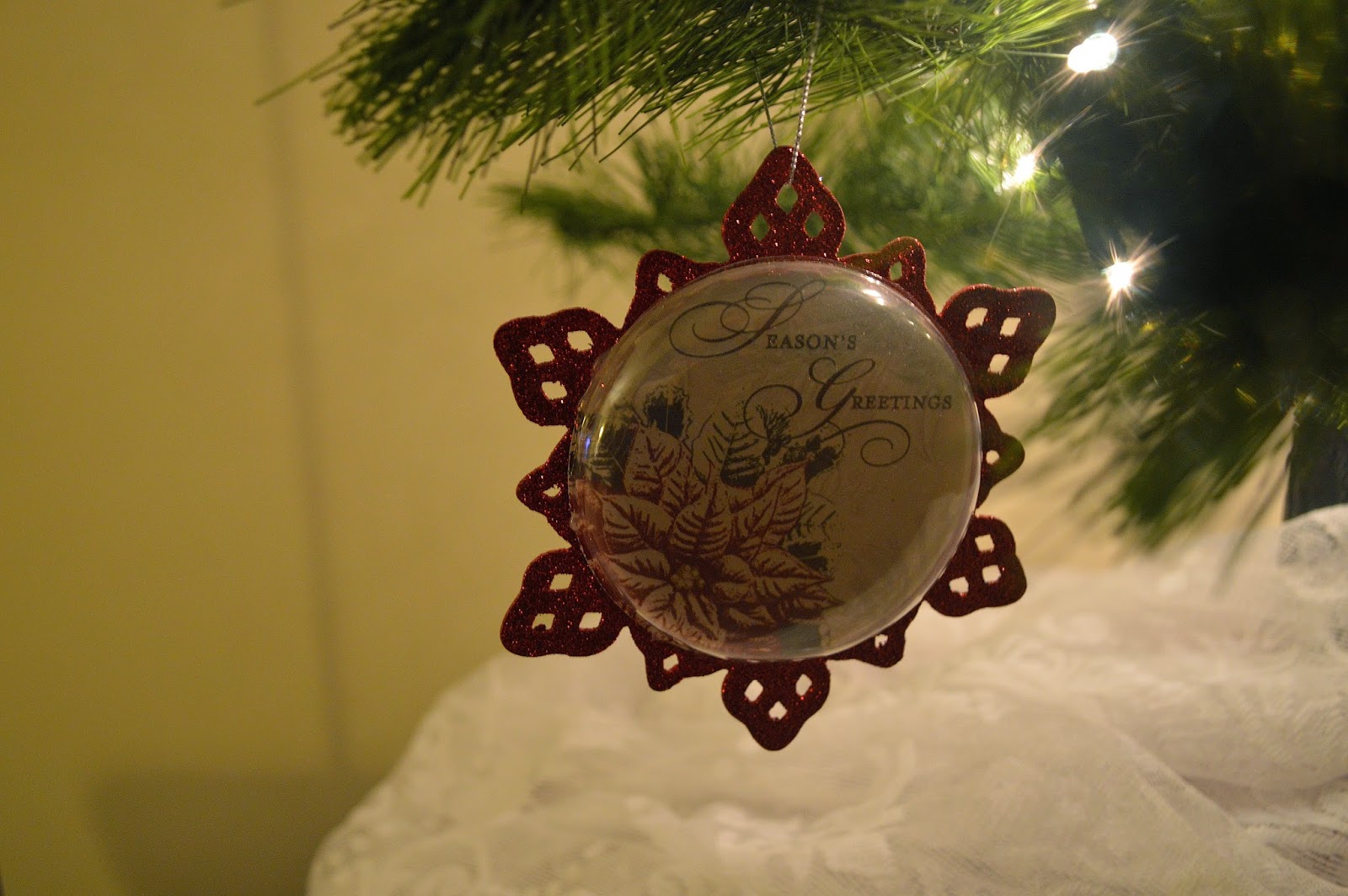 Then we bought this one on our honeymoon at Silver Dollar City in Branson, Missouri: 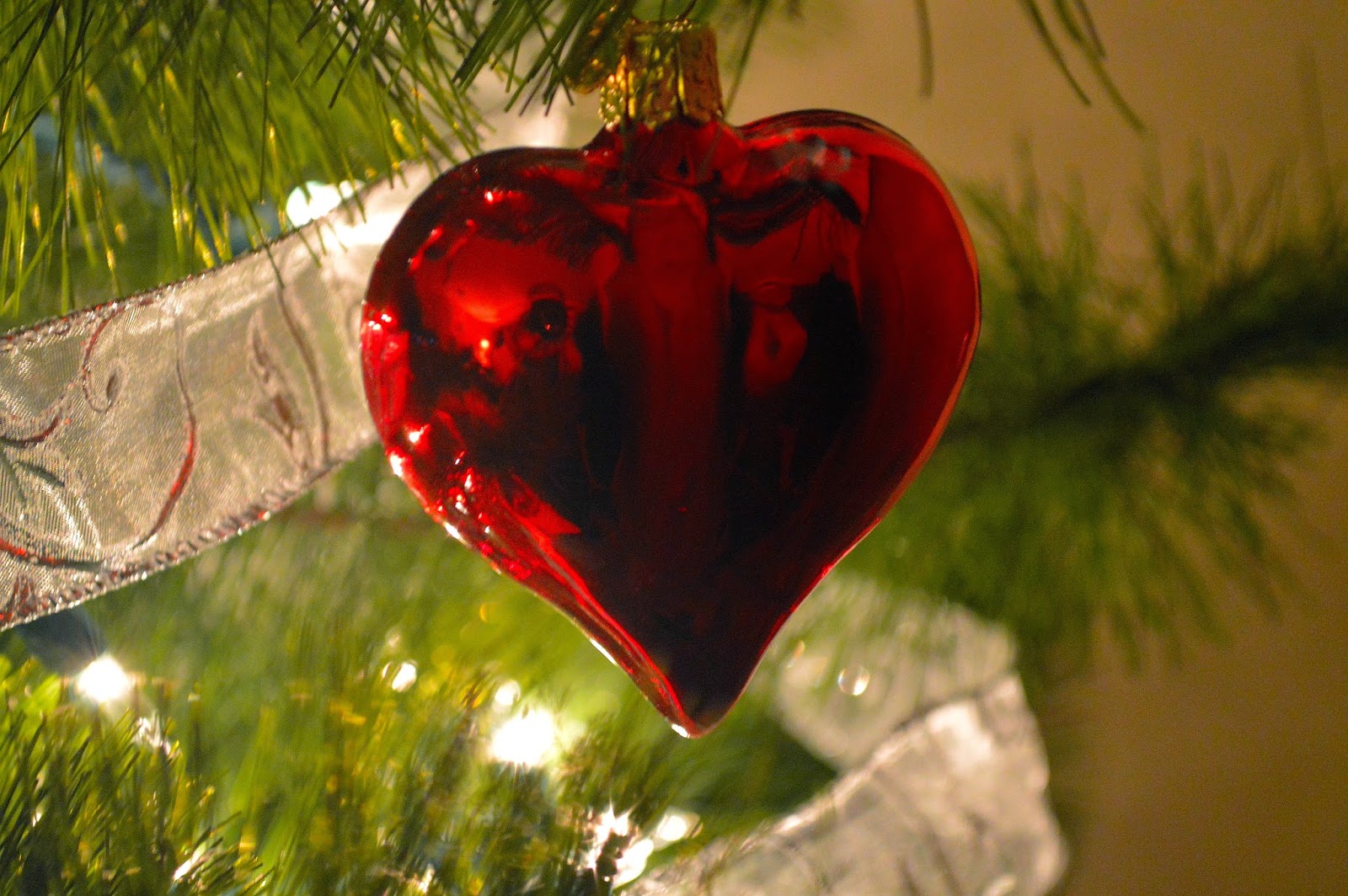 The red heart was added in 2012. We picked it because we liked to watch reruns of the television series Hart to Hart, and The Picky Eater liked to think of us as business tycoon and freelance writer , without the knack for finding dead bodies! 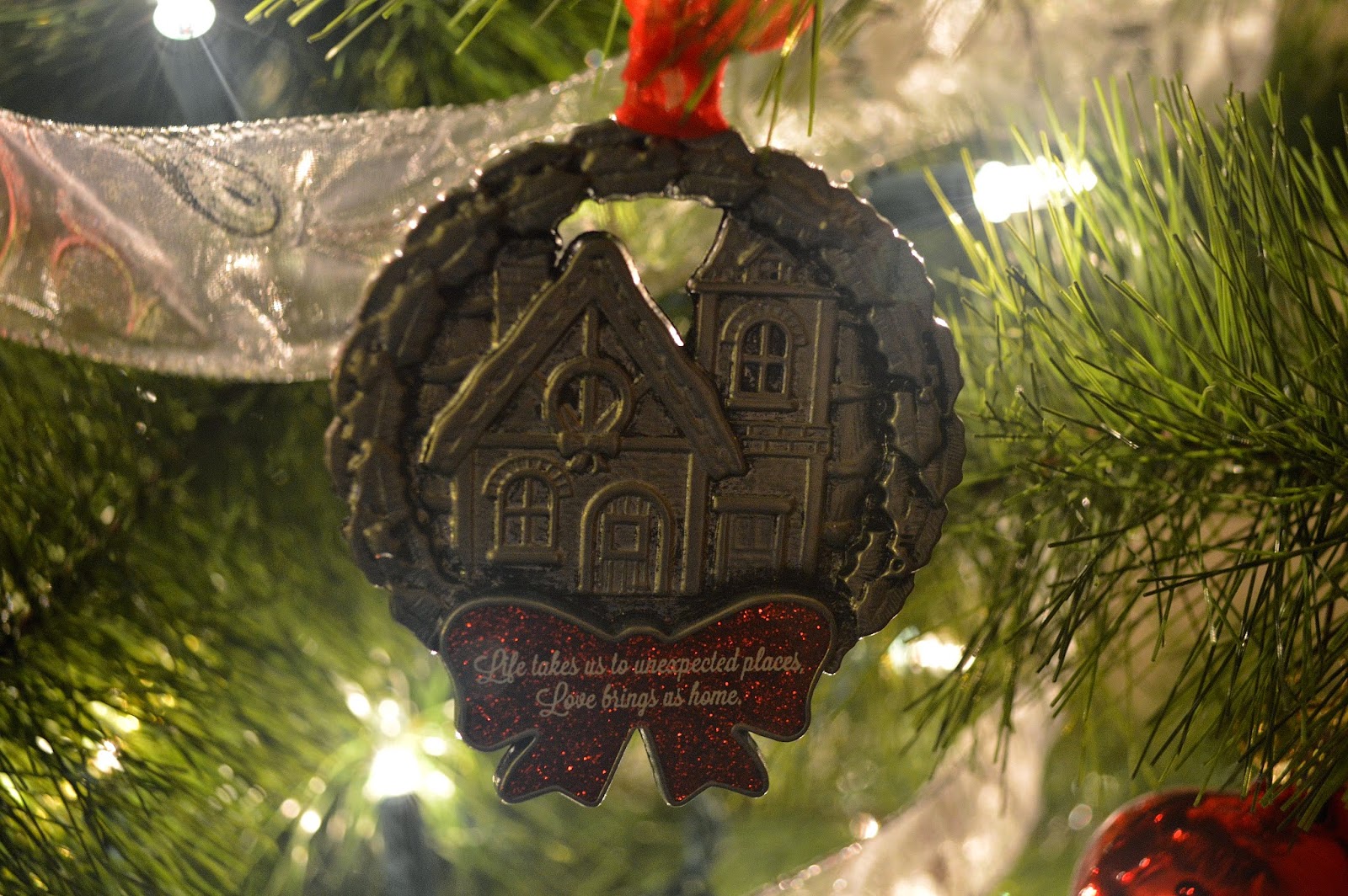 This was the one for 2013. The Picky Eater was a courier and was gone on his route from to about 3 or 4 a.m. It was a comfort when he returned home each morning. 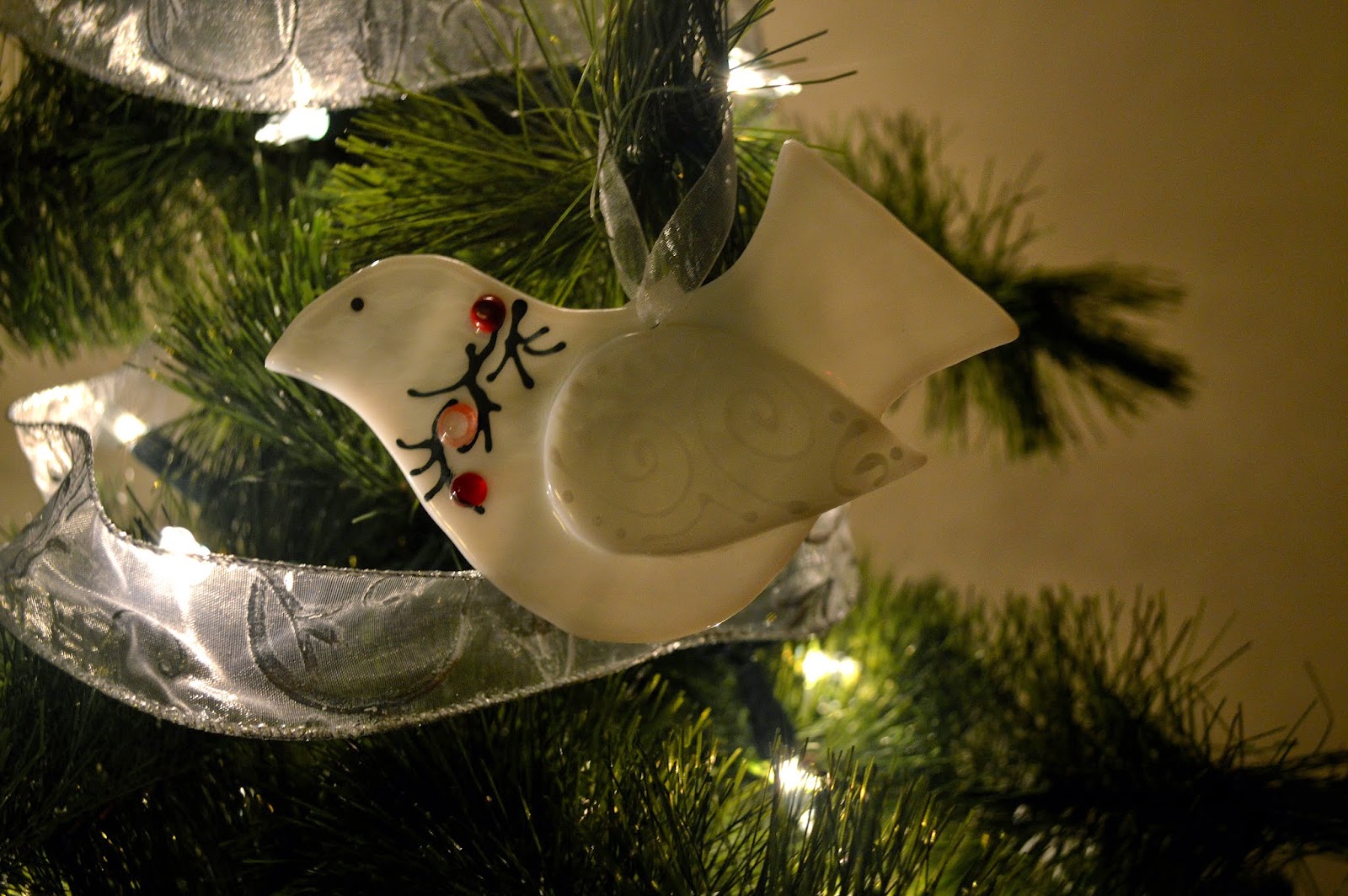 For this year, I bought this dove from Prairie Glass Studios in downtown as my way to honor and remember the love of my life:

Next year I may have a big, new, pre-lit tree for Christmas. Who knows?  For now, I get a lot of joy from looking at “our” Christmas tree.