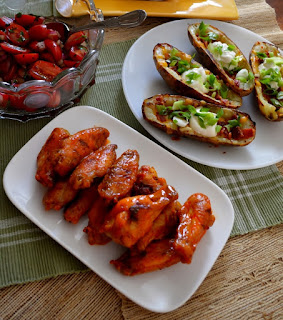 I’ve written in the past about my obsession compulsion love for football. It was a passion The Picky Eater shared.

Our second date consisted of going out to Sunday lunch and then spending the afternoon and evening watching football while getting to know each other better. 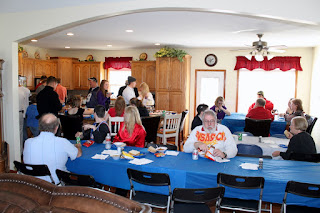 Our Christmas Eve wedding reception had a football theme since the NFL moved the games up one day to avoid playing on Christmas. We held the wedding at to be certain the ceremony was finished by the Kansas City Chief’s kickoff, which was shown on the big screen during the reception. We even invited our guests to wear their
favorite team jerseys. 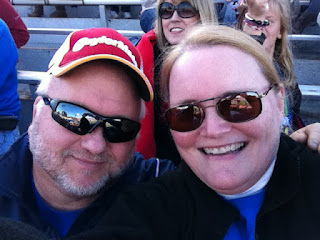 We often watched Chiefs and games at a local sports bar with The Picky Eater's old friend, Chris. We even had season tickets to KU games for a couple of years. Unfortunately the team wasn’t very good, but we had fun anyway. Plus this Missouri/New England girl learned all the fight songs and cheers.

The Picky Eater also took part in his family’s fantasy football league, which will start its tenth season next month. Last year, after he passed away, I got permission from my brother-in-law, Don, (also known as The Commish) to take over The Picky Eater’s team. This was a big deal since I was the first woman allowed to play in the league. 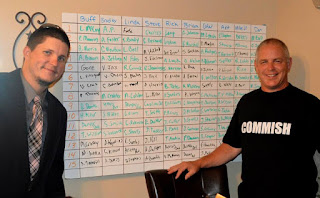 Don was aware of just how much I knew about football, but I don’t think the other guys in the group had a clue. The picture probably started to come into focus on draft day, when my player picks included Matt Forte, Le’Veon Bell, Jeremy Maclin, Nick Foles, Tom Brady, and Rob Gronkowski. If you know football at all, you know that’s a stacked team!

Then I started to win…and win…and win. By the end of the season, I my record was 10-3 and I made it to the league championship, where I lost to my nephew, Anthony (pictured above with Don.) Before the season was over, my brother-in-law, Scott, started to grumble, “Isn’t there something in the by-laws that says she can only be in one year?” (He was kidding…I think. Draft day is coming up Labor Day weekend and I haven’t been kicked out yet!)

When I think of football food, I think of Buffalo wings and potato skins. 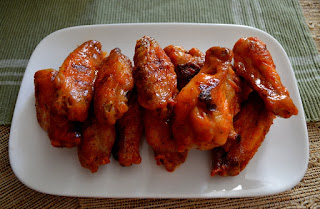 I’ve posted a wings recipe before, but recently I came up with a new grilled version that has a sauce I like even better. You don’t have to make these on a grill. They work just as well made on a stove-top grill pan or baked in the oven. 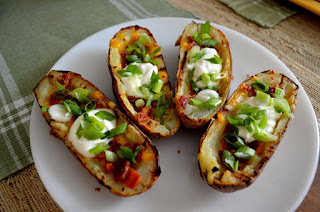 Potato skins were once a popular restaurant appetizer, but I don’t see them much on menus anymore. Too bad. I love them! This recipe is a
grilled version, but again you can make them with the oven instead.

Are you ready for some football?
I am!

Grilled Buffalo Wings
Makes 24 wing pieces
1 cup Louisiana-style hot sauce (I used Franks Red Hot)
8 tablespoons (1 stick) unsalted butter
1 teaspoon Worcestershire sauce
1/2 teaspoon celery seed
2 garlic cloves
12 whole chicken wings
To prepare the sauce: Place the hot sauce, butter, Worcestershire sauce, and celery seed in a small sauce pan. Smash the garlic cloves and add to the sauce. Bring to a boil, reduce the heat to low, and simmer for 10 minutes. Removed the garlic cloves and set aside.
Cut the chicken wings into pieces, discarding the wing tips. Grill over medium to medium-high heat until crispy and cooked through, about 20 to 25 minutes. Remove wings from the grill, dip in the buffalo sauce, and place on a platter to serve.

To make in the oven: Preheat the oven to 375 degrees. Spray a baking sheet with non-stick spray or rub with oil. Place the wing piece on the sheet and bake for 45 minutes. Remove from the oven, dip in the sauce, and serve.

To make in the oven: Brush the scooped-out potato halves with oil, both inside and out, and place on a baking sheet, skin-side up. Put the sheet under the oven broiler and cook until the skin starts to brown and crisp. Turn the potatoes over and boil until the flesh begins to brown and crisp. This should only take 2 to 3 minutes. Fill the potatoes with cheese and broil until the cheese is melted. Remove from the broiler and top with the bacon, sour cream and green onions.

Since I'm from Buffalo (home of the chicken wing) I'm super glad to see you used Frank's hot sauce on your wings! They look delicious! I'm not into football, but my husband likes it so we make things like chili and snacks sometimes to enjoy during a game.