Baking Sheet Supper for One 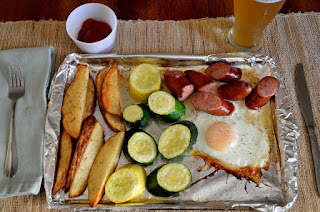 I was intrigued from the first moment I saw it.

While scrolling thought my Facebook feed early one autumn morning, I game across a post from BBC Good Food titled “10 Meals Worth Being Alone For.”  Since I cook for one now, I was curious. When I clicked through to the website, I saw a suggestion for All-in-one Gammon, Egg and Chips. I was hooked.

Just think; an entire meal made on a baking sheet. How easy would that be?

Turns out, the answer is very easy! Clean up was effortless, too, since I lined my smallest sheet pan with foil first. Plus, you eat the meal straight from the pan.

Gammon is the hind leg of a pig that is cured in much the same way as bacon. It may be smoked, and like bacon, needs to be cooked before eating. Since a slice of gammon isn't commonly available in my grocery store, I decided to use smoked sausage instead. Also, to go with the potato wedges and egg, I wanted a veggie. So I added thick slices of zucchini and summer squash to the mix. 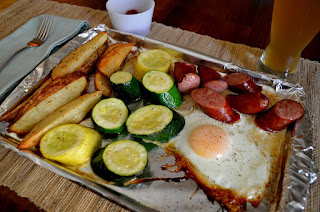 This meal was so much fun to prepare. Once everything was cut up, the rest of the work was done by the oven. No muss or fuss. The meal came together in stages by adding different elements during the baking time, but it was simple.

The result was hearty and delicious. Honesty, it was almost enough food for two people. Just add another egg and a few extra zucchini slices.

I can already imagine switching up the ingredients—sweet potato instead of regular, ham instead of sausage, asparagus to replace the zucchini, etc. Any other suggestions? I’ll be making this supper often as the autumn chill sets in.

Baking Sheet Supper for One

Preheat the oven to 400 degrees F. Line a small baking sheet with foil and lightly spay with non-stick cooking spray.

In a small bowl, toss the potato wedges with 1 teaspoon of olive oil, salt and pepper. Spread the wedges onto the baking sheet. Place in the oven and roast for 25 minutes.

Remove the baking sheet from the oven. The potato wedges should have started to brown. Turn them over and move them to one side of the pan. In the small bowl, toss the zucchini slices with the rest of the olive oil, salt and pepper. Add the slices to the baking sheet, along with the smoked sausage. Return the baking sheet to the oven for 7 minutes.

Remove the baking sheet from the oven. Turn the zucchini slices over, and move both the zucchini and smoked sausage over enough to make room for the egg. Crack the egg in the corner of the baking sheet. Return it to the oven and bake for an additional 7 minutes, or until the egg and sausage are cooked to your liking.

Serve on the baking sheet.