I've written many times about Mamaw, my mom’s mom, who was a wonderful cook but hated the process. On the flip side is Grandma, my dad’s mom, who loved to cook. She passed that love on to my dad, who also loves to cook, and she's where my cooking gene originated. 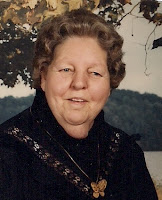 The other genetic side pops up once in a while when I just can’t face the kitchen and must go to a restaurant where people will wait on me and bring me good food I didn't have to make myself. So I got the best branches of my family tree!

If Grandma knew you were coming to visit, she always had something for you to eat, such as cookies, pie or cake. If she didn't know you were coming, one of the first things she would say was, “Let me make you something to eat.” 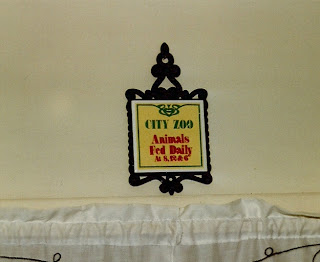 Grandma loved feeding people. And since my dad is the oldest of six, there were always a lot of people to feed. This sign that was in her kitchen offers the perfect explanation.

I remember the tub of lard that sat in Grandma’s kitchen. She was a country cook. Most of the meals I remember featured fried chicken or pork chops…sometimes both…mashed potatoes and pan gravy, and lots of desserts.

But Grandma was best known for her homemade noodles. They were thicker than the egg noodles you buy in the store, which my research suggests is thanks to her German ancestry. To this day family members will close their eyes in reverence at the memory of those delicious noodles cooked in chicken broth. They were a staple at every family meal. The noodles were so coated in flour that the chicken broth became thick gravy while they cooked. 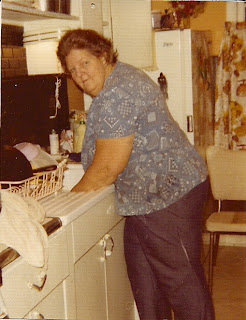 I watched Grandma make them from time to time, but of course I never wrote down her recipe. When she died years ago, the recipe went with her. My Aunt Mary told me she had one particular spoon she used to measure the flour, and the only ingredients were flour, eggs and water.

A few years ago, my sister challenged me to recreate the noodles for Thanksgiving. I did! When I bit into the noodles, all of the memories of Grandma’s kitchen came flooding back.

This time I decided to add chicken and vegetables to the mix to make a complete meal. The Picky Eater liked it, and even ate the leftovers!

I think Grandma would be happy. 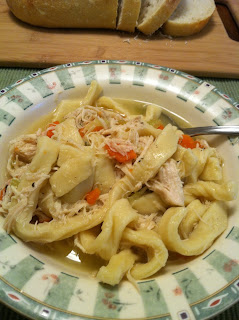 In a large bowl, or on the counter top, measure out the flour and salt. In a small bowl, beat together the egg and yolks. Make a well in the middle of the flour and add the egg mixture in the center. Using a fork or your fingers, start gradually bringing in the flour from the edges and mix until the dough comes together. If necessary, add water, a tablespoon at a time, to help the mixture form a ball of dough.

Turn the dough ball out onto a floured surface and knead until smooth and soft, about 5 minutes. (One recipe said this dough benefits from a good long kneading.) Wrap the dough in plastic and allow it to rest for 30 minutes.

Divide the dough ball in half. Roll out each half on a floured surface until the dough is about 1/8-inch thick. If the dough is difficult to roll out that thinly, just cover the flattened dough with plastic and let it sit for a few minutes to relax, and then continue rolling.

Roll the flattened noodle dough up into a loose log. Slice the log into 1/8 to 1/4-inch strips to create the noodles. All the noodles to sit and dry until you are ready to cook, or allow them to dry completely before storing. (I keep them in the freezer.)

Place the chicken, broth, onion, thyme, and bay leaf into a large pot. Bring to a boil, and then lower the heat to a simmer and cook until the chicken is done, about 15 minutes. Remove the chicken and set aside.

Add the remaining ingredients and bring back to a boil. Lower the heat to a simmer and cook until the noodles are tender, about 30 minutes. (The time will vary depending on the thickness of the noodles.) Meanwhile, dice up the cooked chicken. When the noodles are ready, add the chicken back to the pot. Add salt and pepper, to taste.

The recipe sounds wonderful, but I enjoy the story even more. Isn't it wonderful to recall those tender memories of our childhood, and how fortunate we feel when something brings them back?

These noodles definitely call for homemade chicken broth! You should post an easy bone broth recipe to use and complete the homemade meal! Broth can also be frozen and has so many health benefits! Thanks for the noodle recipe. I've never made my own but am going to try it this week.

Yes, Erica, a homemade broth would be wonderful! I like to use the broth I get after cooking a whole chicken in my slow cooker. I've never developed an actual recipe for chicken broth. I'll have to put that on my recipe agenda! Thanks for the inspiration.

Made your Grandma"s Soup tonight. It was wonderful. Perfect for a cold winters eve. Thank you for sharing

Alice, I'm glad you liked it!

I am making these noodles right now as we speak. They are for my Chicken Pot Pie soup. Can't wait to try them, as homemade is always best.
My mom made noodles all the time and nothing comes close to tasting as good as hers. I think these will do the trick. I loved the story behind the recipe as well. Thank you for sharing this.

I'm glad you liked it, Nightowl, and I love your name! lol Hope they turned out okay for you.

I've been searching for a good noodle recipe and am now sold on yours. I will be making your Grandma's Soup tomorrow night with my 9 and 11 year old boys (who are very excited to be making homemade noodles). Thank you for sharing the recipe and your story. I've looked at about a hundred recipes and was stuck on yours because they obviously look DELICIOUS but also just for the history behind the recipe. Thanks again!!

Rosebud, I hope it worked out for you!

Great recipe! I used lovage from my herb garden in substitute for the celery flavor since I didn't have any celery on hand. I also used Amish style noodles since I didn't have time to try and make my own. I added two slices of pepper jack cheese to melt into the sauce to give it just a slight kick....delicious!!!!

With the actual soup do you just keep the water you use to boil your chicken as your soup?