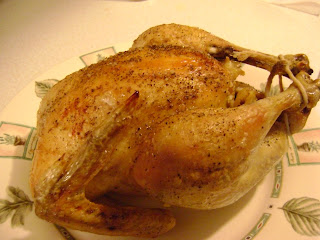 Have you ever watched “’s Test Kitchen” on PBS? I've been a fan for years. Filmed in a 2,500-square-foot-kitchen in , this is where the delicious recipes for Cook’s Illustrated and Cook’s Country magazines are created, as well as the ones for the television program. 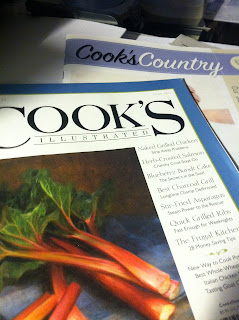 What I love about this television show and the magazines is how the folks in the test kitchen try out every imaginable recipe for a dish until they develop what they feel is the perfect one. They also test kitchen equipment and ingredients to find the best taste, performance, and value. Since the magazines do not contain advertising, I feel secure that I'm getting an honest opinion.

For a food writer, the Test Kitchen’s efforts are priceless. While I will test different ways to create a recipe, their work often points me in the right direction and saves me a lot of time. Sometimes I think their final recipe is a little too complicated, but not often. And I may change ingredients or steps from time to time, but their basic ideas offer a sound foundation from where to start. 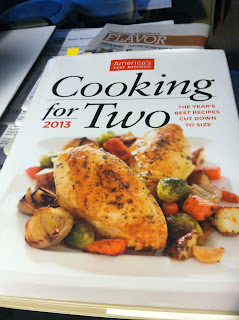 Recently, I was thrilled to receive the ’s Test Kitchen book Cooking for Two 2013. It’s perfect for my household, which consists of The Picky Eater and me. Plus, each recipe includes the detailed explanation as to how it was created. I immediately started flagging recipes to try.

Here are the first two, both of which were hits in our house: 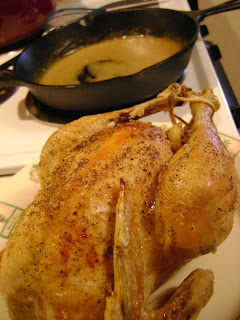 First, I made the Weeknight Roast Chicken, which is done in a skillet and only takes an hour! Instead of making the sauce in the recipe, I made gravy in the skillet.

I loved it! The meat was moist and the skin nicely browned. The Picky Eater liked it, but he wanted the meat to be more fall-off-the-bone. Oh well, I guess I’ll have to try it again! 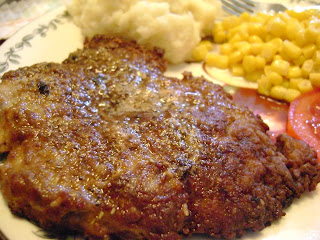 Next, I made the Minute Steaks with Garlic-Parsley Butter…except mine had garlic-rosemary butter since I was out of fresh parsley.

The recipe called for spreading the just-cooked steaks with a compound butter, but instead I melted the compound butter in the still-hot skillet to get any left behind steak flavor and cook the garlic just a bit. Since the Picky Eater doesn't like garlic, I left his steak plain and he topped it with his favorite sauce—ketchup. I, however, happily poured the melted butter over my serving.

We both loved this one! The Picky Eater has already requested we have it again. (He said, “I give it three thumbs up and I only have two thumbs!” Sometimes he can be a little silly, but he’s cute.)

I can’t wait to try more recipes in this cookbook. I’m just getting started!

Place a 12-inch oven-safe skillet (I used cast iron) into the oven on a rack place in the middle position. Preheat the oven to 450 degrees F.

In a small dish, mix together the salt and pepper. Dry the chicken with paper towels, and then rub the entire bird with olive oil. Next rub the salt/pepper mixture all over the chicken. Tie the legs together with kitchen string and tuck the wing tips under the back.

When the oven and skillet are preheated, place the chicken into the skillet. Roast in the oven for 25 to 35 minutes, or until the breast meat reaches 120 degrees and the thighs reach 135 degrees. Turn the oven off—yes, you turn off the oven!—leaving the chicken inside for another 25 to 35 minutes, until the breast reaches 160 degrees and the thighs reach 175 degrees. Remove the chicken to a cutting board and allow to rest for 20 minutes before carving.

In a small dish, mix together the butter, rosemary, garlic and Worcestershire sauce until combined. Set aside. 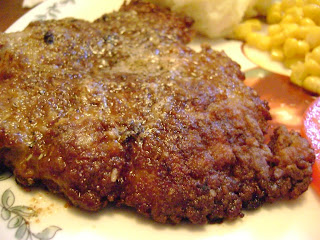 Place the flour into a shallow dish. Pour the oil into a 12-inch non-stick skillet (I used cast iron) and heat over medium-high heat until the oil just begins to smoke. Pat the steaks dry with paper towels, season with salt and pepper, and then coat with the flour, being sure to shake off the excess.

Fry the steaks on one side until they reach a deep brown, about 3 minutes. Turn the steaks and continue to cook for an additional 1 to 3 minutes. Remove the steaks to serving plates.

Turn off the heat under the skillet and pour any excess fat. Add the butter to the skillet and cook until just melted, scraping any steak bits off the bottom. Pour the melted butter over the steaks and serve.
Posted by A Sunflower Life at 9:22:00 AM