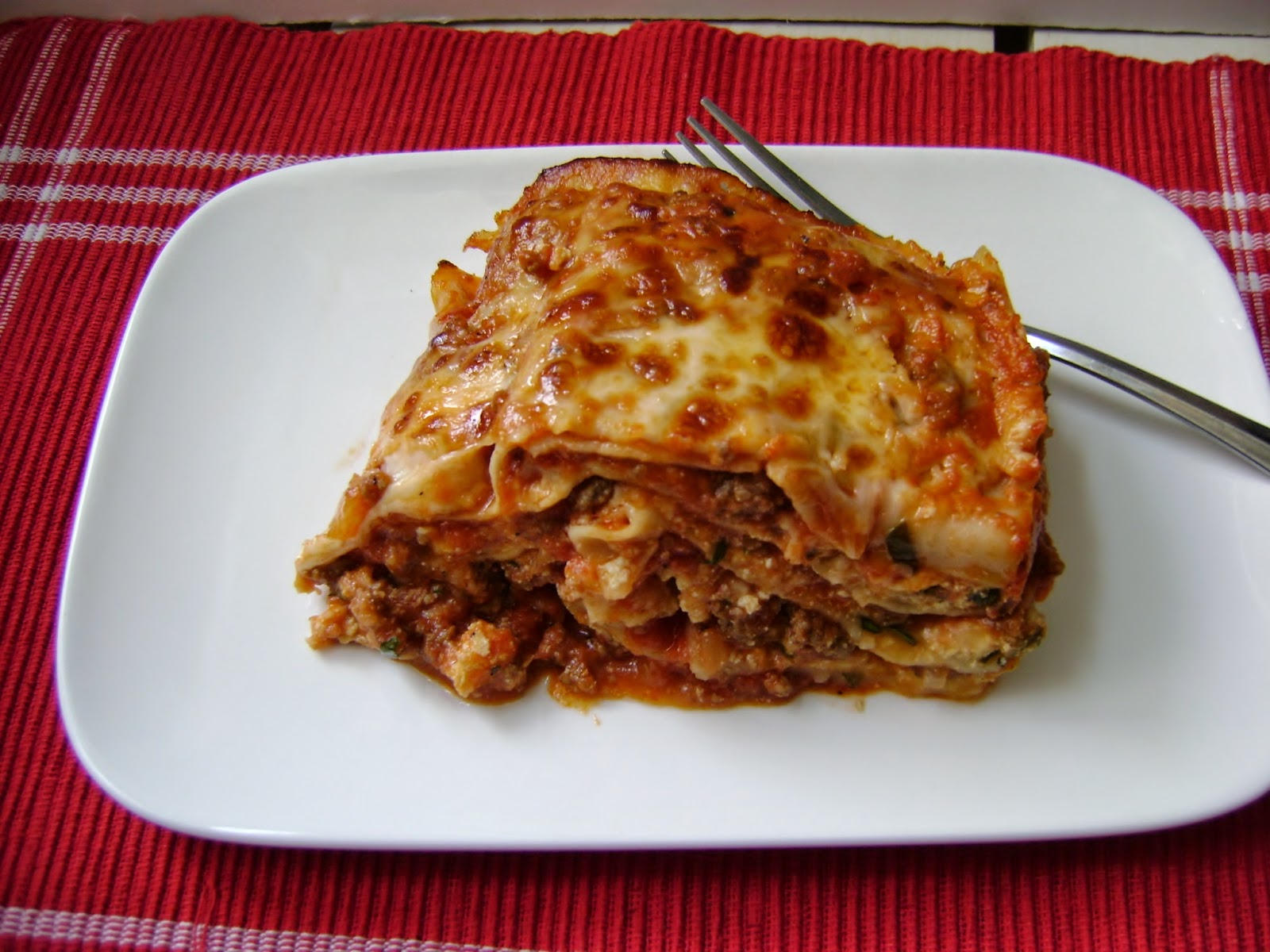 When it comes to meal preparation, I have two issues that must always be addressed.

First is the size of the recipe. Since dinner most evenings is just for The Picky Eater and me, recipes are often too large for our needs.

Second, The Picky Eater is, well, picky about what he wants. Often that means I forgo recipes I would like because there would be enough leftovers to last a month. 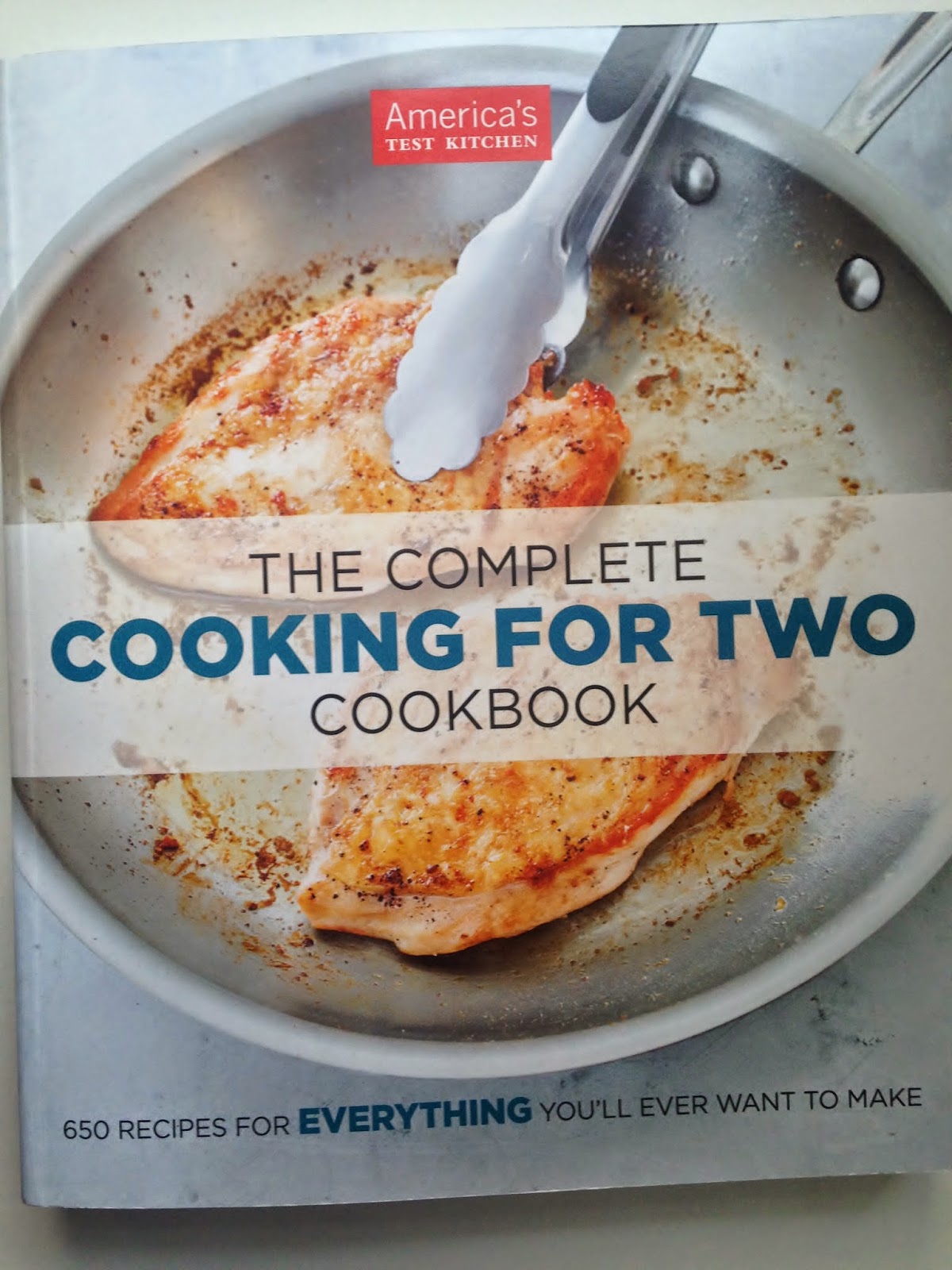 So I was thrilled when the folks at ’s Test Kitchen sent me The Complete Cooking for Two Cookbook. Last year I posted about how much I liked the 2013 edition, with two great recipes. This cookbook is a combination of all the previous yearly versions.


Inside I not only found all of many favorite recipes downsized for two, but there were also a lot of new ones to try. I love the idea of making brownies and cakes that are just big enough for two. Perfect for my middle-aged household. Plus, the front is full of shopping tips, kitchen supply suggestions, and food storage ideas, which would make this cookbook a terrific wedding gift idea.

Now I can make recipes that fit my tastes and dishes we both like without the fear of massive leftovers. 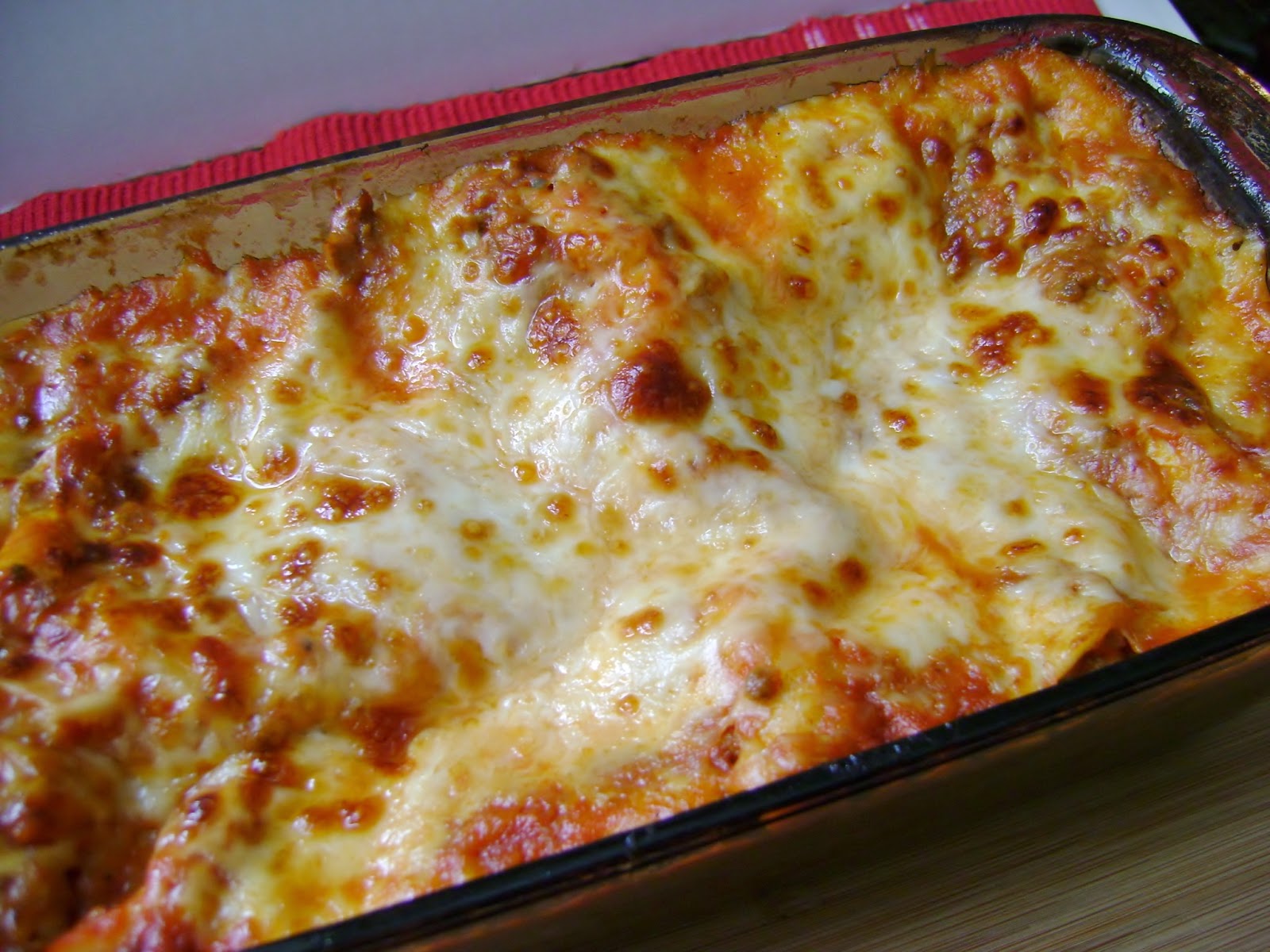 This lasagna recipe was a big hit. Absolutely delicious! Who would have ever thought to make it in a loaf pan? Perfect!

Since The Picky Eater has to watch his sodium intake, I used low-sodium diced tomatoes and sauce. Also, he doesn't like chunks of tomato in dishes, so I pureed the diced tomatoes to smooth out the sauce and just let it simmer a bit longer than the original recipe to thicken. The only other change I made was to use ground sirloin instead of the recommended meatloaf mix .

Stay tuned for more recipes from this terrific cookbook! 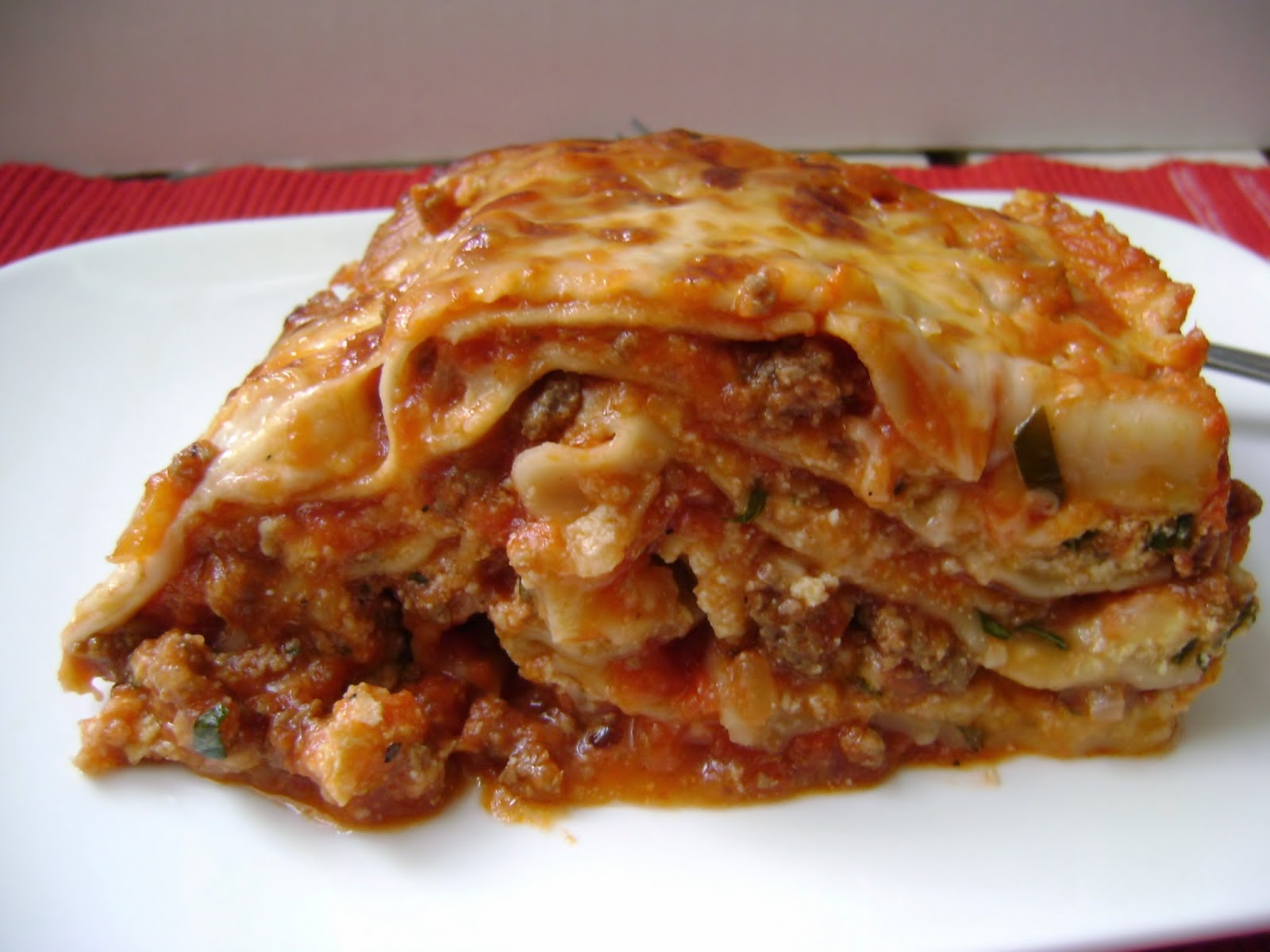 Preheat the oven to 400 degrees. Move an oven rack to the middle.

For the sauce: In a blender or food processor, puree the can of diced tomatoes until smooth. Set aside. 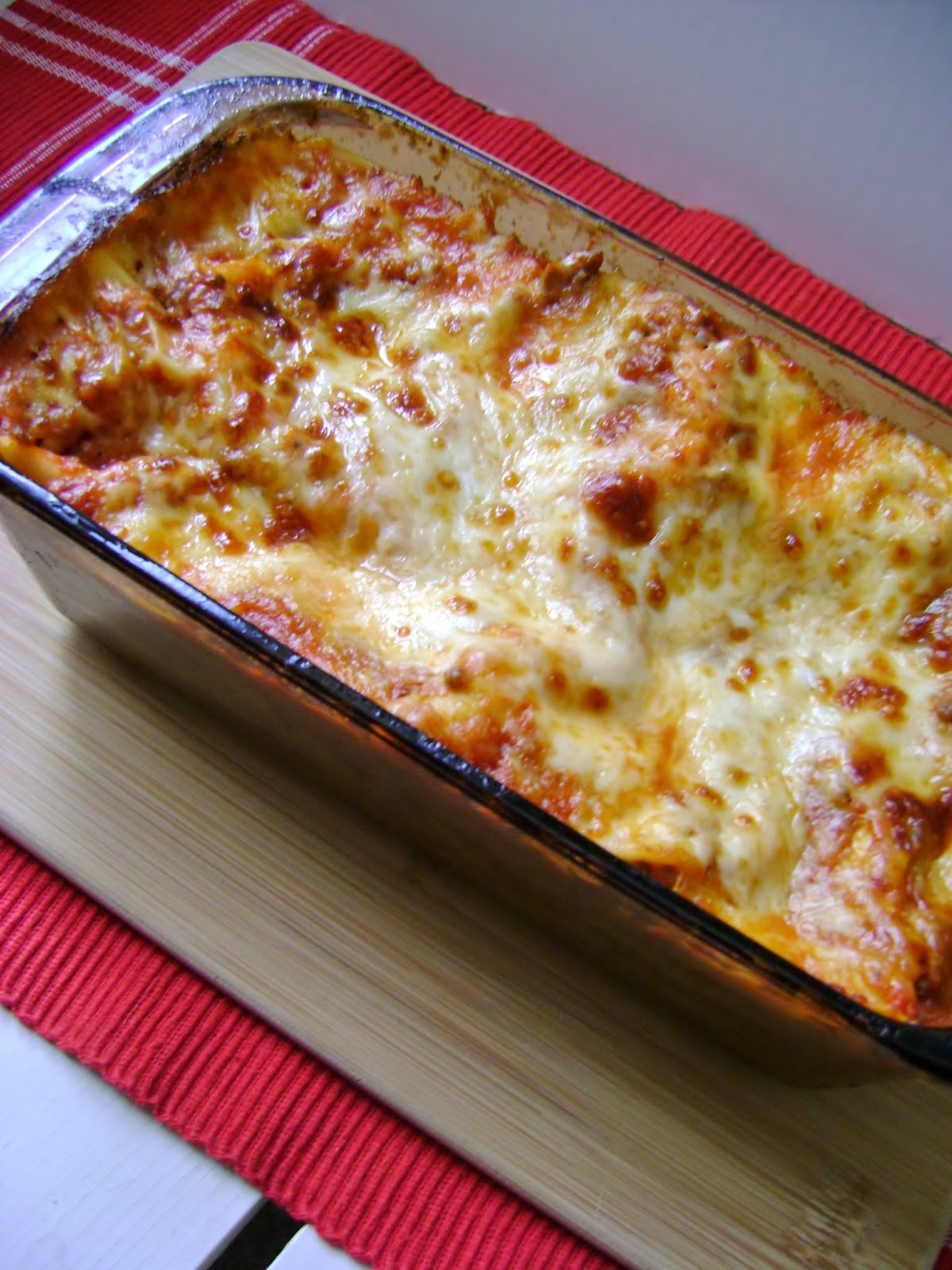 In a large skillet, heat the oil. Add the onion and salt, and saute until tender. Stir in the garlic and cook for just 30 seconds, and then add the ground sirloin. Cook until browned. Stir in the cream and cook until it evaporates, which takes about 1 to 2 minutes. Add the pureed diced tomatoes and tomato sauce. Bring to a simmer and allow it to cook while you prepare the filling, about 15 minutes.

For the filling: In a medium-sized bowl, whisk together the ricotta, 1/2 cup Parmesan, basil, egg and pepper.

To assemble: In the bottom of a loaf pan, spread 1/2 cup of the sauce. Lay one noodle on top, and then spread a third of the ricotta mixture on top of the noodle. Sprinkle with 1/4 cup of the grated mozzarella, and top with another 1/2 cup of sauce. Do this two more times. Lay the final noodle on top and cover with the remaining sauce, mozzarella, and 2 tablespoons Parmesan cheese.

Spray a piece of foil with non-stick cooking spray and use it to tightly cover the loaf pan. Set the loaf pan on a baking sheet to catch any spillover, and bake for 25 to 30 minutes, or until the sauce bubbles around the edges of the pan. Take the foil off the top and keep baking until the cheese has browned to your liking, about 10 minutes. Remove from the oven and cool for at least 20 minutes before serving.
Posted by A Sunflower Life at 1:11:00 PM

Dear Linda, I like the idea of cooking in a loaf pan and not having too much left over. Also you can make things that only you like and have it for the next night or the other way around.
Looks good. Blessings, Catherine

what a wonderful idea! looks like you have found a delicious answer!!
Mary

I made this tonight and it was really quite good. The only change I made was I used cottage cheese instead of ricotta.

Joanna, I'm glad it worked for you. I'm curious what part of the country you are from. That seems to determine who uses cottage cheese and who uses ricotta in lasagna.

Hi, I'm in Australia and just trying to work out the equivalent ingredients and the difference between pureeing the diced tomato and the tomato sauce. Is the tomato sauce like ketchup or like a pre-made sauce you would put on pasta?

The tomato sauce is more like a pre-made sauce you put on pasta, but it wouldn't have any seasoning other than salt. It is a thicker consistency than what you get pureeing the diced tomatoes. Hope this helps.

Wow this was amazing! I did modify it just a bit. I added some sugar to the sauce for for a sweeter taste and used 1/2 ground sirloin and 1/2 mild Italian sausage.

Judy, I'm glad you liked it, and I'm happy you adjusted the recipe to fit your tastes. Thanks the sign of a good cook!

This is so perfect! My husband always asks for lasagna but as its not my favorite dish to have, or have left over this is the perfect amount! Thanks for sharing!

Hi Linda it's Michelle from NH. Love, love this lasagna recipe for two. I make it a lot. Lost the recipe and so happy it was easy to find on your site. Hope all is well. Xxoo Michelle

Thanks, Michelle. It is one of the most popular posts on my blog. I'm glad you enjoy it!

Can you make this in advance and freeze and it? Kathryn

Yes, Kathryn, you can make it and freeze it. Since it calls for no-boil noodles, I would bake it first, freeze, and then rewarm it when you're ready to eat.

When I make this I actually make a double batch and I freeze one uncooked. I let it thaw in fridge and cook as directed.

We use half hamburger half Italian sausage and half ricotta half cottage cheese. It's Yummy

Nancy, isn't it fun to tinker with recipes?! I make a double batch, too. It's nice to have dinner ready for the oven when I get home.

I have made this twice (with minor revisions) and it is going into regular rotation. Love not having toooo many leftovers. Although, the leftovers are almost as good as fresh baked! I use cottage cheese - have lived in Michigan my whole life and this is how we "do" lasagna. I also add a tablespoon or so of Italian seasoning, 1/4 to 1/2 cup diced pepperoni, a teaspoon of sugar and 3 or 4 minced, large garlic cloves to the pan with diced onions before adding meat and tomatoes. I let everything simmer for 1/2 hour or so before assembling lasagna. Don't leave out the heavy cream! It gives a lot of richness to the flavor. Thanks so much for posting.

Your additions sound delicious. I grew up with cottage cheese being a part of lasagna, too, but almost 20 years in New England switched me to ricotta cheese! Thank you for sharing your experience.

I must post another rave for this recipe! I have made it 4 times since February....twice for company and two more times just because, LOL! I think that lightly blending the diced tomatoes and the heavy cream are key to this flavorful sauce. My handwritten version will be added to our "family favorites" cookbook. Thank you again.

I'm glad you enjoy the recipe! Thanks for your comment.

It's in the oven as we speak - first time I've made this version and it smells wonderful! The only change I made was to add a sprinkle of Italian Seasoning to the meat. Can hardly wait for dinner!

I live alone and find hard to make favorite foods for one. I tried this recipe and must say it was awesome and I got 4 meals out of it

Marilynn, the added seasoning must have made it delicious.

Anonymous, this recipe is perfect for those of us who live alone. I'm glad you enjoyed it!

Easy recipe to make with the "no boil" lasagna noodles. I, like Marilynn Lause added some Italian seasoning to the sauce along with a little sugar which I add to all my tomato based dishes. The whipping cream adds an extra depth of flavor. I didn't have fresh basil, but dried basil worked just as well. Will definitely make this again!

I was in disbelief when you were talking about pureeing the tomatoes because I have Picky Eater too! He won’t eat anything with “hunky tomatoes” as he puts it. When we first started dating I made Manwiches, simple right? Wrong! I had to strain those minute onions out first, I didn’t even know they were in there!! ��

Oh my goodness, Piper! I'm glad to know I'm not the only one who had a picky eater in their life! lol

This looks amazing, I already wrote it down in my recipe notebook and will definitely have to make it soon.

What are the nutritional values in a serving. I’m on a low sodium diet so need to know.

According to the Cooks Illustrated website, the original recipe has 1,330 mg of sodium per serving. I made mine with low-sodium canned ingredients, so it should be much less.