Wait, let me backtrack for a moment. My sister, , is on Weight Watchers. (I feel safe in telling you this since she posts her progress regularly on Facebook.) She is doing great! So far she is more than halfway to her goal and she looks terrific. I’m proud of her. 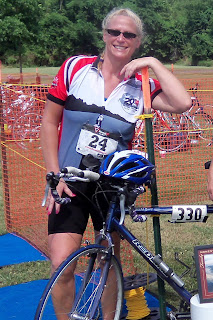 This is —she competes in triathlons! Crazy sister! :)
Now, back to what I said before—I hate diets! Maybe that’s because I’ve tried just about every one out there, including Weight Watchers, so many times I’ve lost count. Though I’m sure everyone who takes one look at me thinks I need to be on a diet, the whole process just doesn’t work for me.
In fact, I wrote a column about it! For an entire year, I wrote a monthly column called Let’s Get Real for the Concord Monitor newspaper in (when my name was Linda A. Odum.) I decided to change the way I think about dieting, and instead make lifestyle changes I could live with for the rest of my life. Those changes included eating whatever I wanted but in smaller portions, being wary of sweets (my weakness), and exercising more. And it worked! I lost about 20 pounds before I started writing the column, and then 20 more during that year. Ever since then, I’ve lost about 20 pounds more, and that was while going through a divorce and moving to . To be honest, I’m not sure exactly how much weight I’ve lost in total because at my heaviest point the scale wouldn’t register my weight—it didn’t go that high! 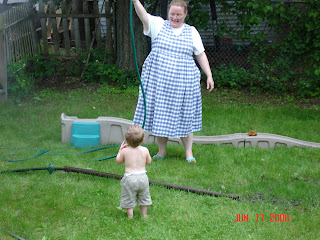 Me before I lost weight—June 2006. So big it was hard for me to climb stairs and get up off the floor. 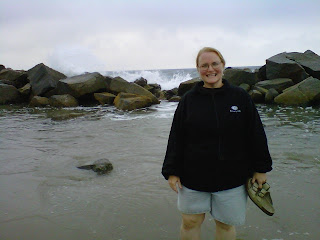 Me last October in .
I absolutely believe by eating smaller portions and exercising, anyone can lose weight and keep it off forever. In fact, According to the U.S. Food and Drug Administration, approximately 50 million people go on diets each year. Of those dieters, an estimated 8 million will sign-up for a structured weight-loss program. Many will lose weight, but only about 5 percent will keep it off for the long term. Most will regain part or all of the lost weight..
Of course, even though I know what works for me, that doesn’t always mean I follow my own advice! I’m terrible about exercising in the summer heat—I hibernate as though it were winter. Yes, I could get up early and exercise before it gets hot…but that would mean I’d have to get up early!
My sweetheart, Michael, and I eat at restaurants a lot, which isn’t good for portion control since restaurants love to overload the plate. We are trying to eat at home more often. First it was to satisfy my need to cook—I love being in the kitchen preparing meals with fresh ingredients. But we also need to dine in our own home because Michael has survived three heart attacks, including the dreaded Widow Maker. Preparing our own food means I can use healthy fats in our dishes (olive and canola oils), and watch the sodium content.
My way of losing weight is slow to be sure. But it also means I am less likely to gain the weight back. And believe me, I don’t want to go back to June 2006!
This recipe for Spicy Gazpacho is a great start. It uses the fresh vegetables now showing up at the local farmer’s markets, and it is fat free without the sour cream garnish! Plus it’s a refreshing way to beat the summer heat. Now, if I can just get Michael to believe soup can be eaten cold…
Spicy gazpacho
Serves 8
1 green pepper, cored, seeded, and chopped
1 red pepper, cored, seeded, and chopped
1/2 cup chopped red onion
2 stalks celery, chopped
1 cucumber, seeded and chopped
2 cloves garlic
1/2 jalapeno pepper, seeded
3 cans (14.5 ounces each) diced tomatoes
1/2 teaspoon ground cumin
Salt and black pepper, to taste
3 tablespoons lemon juice
Sour cream, for garnish
In a large bowl, place the green and red peppers, onion, celery, and cucumber. In a food processor, finely chop the garlic and jalapeno. Add two cans of tomatoes, cumin, salt, black pepper, and half of the chopped vegetables. Process until smooth.
Pour the processed mixture into the large bowl with the chopped vegetables. Add the remaining can of tomatoes and lemon juice. Stir, cover, and chill at least 2 hours or overnight. Serve garnished with a teaspoon of sour cream.
Posted by A Sunflower Life at 12:27:00 PM