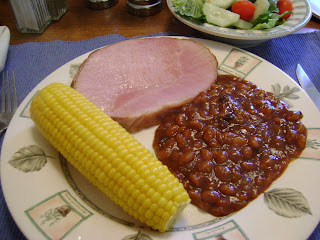 Today was my sweetheart Michael’s birthday. Since it was a weeknight, I offered to make his favorite meal for a special dinner: Hormel Cure 81 ham, corn on-the-cob, salad, and baked beans.


Almost from the day we met, Michael has asked me to make baked beans. He loves them! Unfortunately for him, it is not one of my favorite dishes so I never think to make them. Plus, he is pretty particular about just what makes the perfect baked beans. I would taste the brands he liked from the store, and anytime he enjoyed baked beans at a restaurant, I would try to get a taste. After a while, I felt I knew the flavors he looked for—sweet and slightly smoky.


I pulled out my copy of the Kansas City Barbeque Society Cookbook. It was full of ideas, but none of the recipes seemed just right. So I took the one that was closest to what I was looking for and then added my own adjustments and touches. (Of course, ketchup had to be one of the ingredients!) 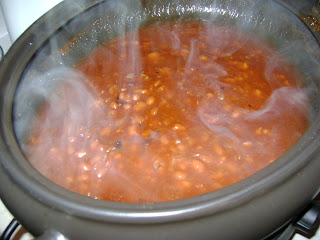 The beans were a hit! I made them in the slow cooker, and Michael snuck a bowl full before dinner time. He ate more for dinner and wanted to make sure there were leftovers for the rest of the week. The recipe makes such a large amount that I even put a container full in the freezer for future enjoyment.


Michael said, “It doesn’t get any better that this!” 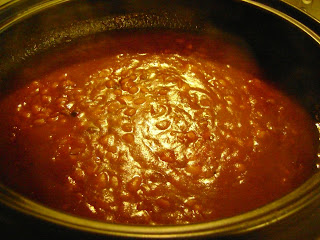 Heat about 1 tablespoon of olive oil in a skillet. Add the onions and saute until just softened.


Add the brown sugar, barbecue sauce, and ketchup into the slow cooker. Whisk together until combined. Mix in the beans and sauteed onions. Set the temperature to low and cook for 3 to 4 hours, stirring occasionally so the beans do not burn. Season with salt and pepper just before serving.


Note: These beans are sweet. If you like yours less so, just cut the sugar amount in half. Also, about 1/2 pound of crispy bacon would make a nice addition.
Posted by A Sunflower Life at 9:36:00 PM

These sound wonderful, Linda. My family would make short work of them. Have a wonderful weekend. Blessings...Mary

Yeah, I'm not a real big fan of beans either but my husband and son are. I bet they would love this!

32Thanks Linda! I knew you would bail me out of my pickle today. Didn't have a recipe for bake beans. But I'm going to "express" cook them and add bacon & hambuger to them. Come see me! Love ya! fred

Fredda, I'm glad this recipe help out! Let me know what you thought!