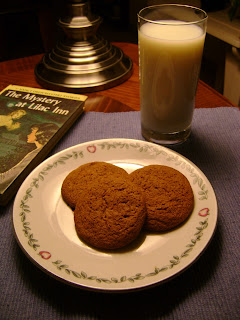 A few days ago, I was looking for inspiration in Mamaw’s recipe box when I came across a card written by me! Sometime during my first marriage I wrote down this recipe for Honey Ginger Snaps (the card has my first married name printed on it.) Unfortunately, unlike Mamaw who almost always noted where the recipe came from and what year, I didn't write down where I got this one. It could have come from a TV food program, the internet, or a magazine. Who knows?

I don’t recall ever making these cookies either, which is a shame since I could have been enjoying them for years! 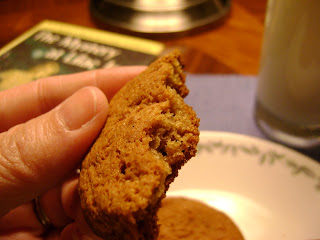 These snaps are made with honey instead of the more traditional molasses, so they have a milder taste that is filled with ginger, cinnamon and cloves. They are also easy to make and do not get rock hard like the ginger snaps found in grocery stores.

Honey ginger snaps make the perfect bedtime snack, and taste wonderful dunked in a glass of ice-cold milk. Oh, and they also go well with my morning cup of coffee! 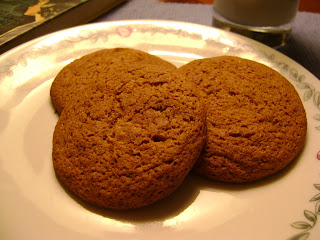 In a bowl, whisk together the flour, baking soda, salt, ginger, cinnamon, and cloves. Set aside.

In the bowl of a mixer (or by hand), cream together the honey, butter and sugar until smooth and fluffy. Add the egg and mix until combined. Slowly add in the flour mixture and blend until combined, occasionally scraping down the sides of the bowl.

Cover the dough with plastic wrap and chill for at least 1 hour.

Preheat the oven to 375 degrees F and line two baking sheets with parchment paper. Roll level tablespoons of dough into balls (or use a cookie scoop) and place 2 inches apart onto the baking sheets. Bake for 8 to 10 minutes, or until the cookies are golden brown. Remove the cookies to a cooling rack to cool completely. They become crunchier as they cool.

I am loving the idea of these sweet honey morsels. It is fun to come across a recipe you forgot about. And you still like!

I have a weakness for gingersnaps. It's a holdover from childhood and dunking them in milk when my mother was not looking. Yours sound delicious. I hope your weekend is off to a great start. Blessings...Mary

I love ginger cookies (OK all ginger baked goods). It's one of my favorite flavors. These cookies sound yummy!

I d love a good gingery cookie! I also love that you have an old Nancy Drew book on the side table! I re-read the very first of that series this past summer (ouch! it feels funny to say that, but it IS fall now!). I loved Nancy Drew and her pals when I was a young reader!