Boy, is it hot! My computer is flashing 102 degrees on The Weather Channel’s desktop alert. Nice way to head into the 4th of July weekend, isn’t it? 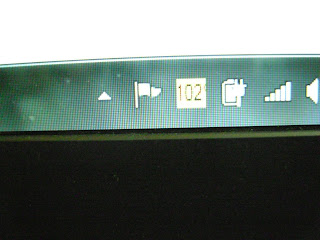 One of my all-time favorite grill marinades is one I developed for a Boston Globe article a few years ago. I called it Mediterranean Chicken since the ingredients are Greek in flavor—olive oil, lemon, oregano, and garlic. It’s simple to make and always gets raves from family and friends.
When I first started to cook for my sweetheart, Michael, I had some boneless pork chops to make for dinner one night. Since the marinade works well on chicken, I thought I’d give it a try on the pork. However, when I was reaching into the spice cabinet for the oregano, I spied the rosemary. It reminded me of how in the past I would butterfly a pork loin, rub the inside with olive oil, garlic, and rosemary, tie it up and put it onto the grill’s rotisserie. Yum! So I decided to try rosemary in place of the oregano for the marinade. And I added a sliced onion because I thought it was part of the original recipe. (I found out later it wasn’t.)
Since the apartment Michael and I share doesn’t have an outdoor space for a grill, I used the George Forman variety. The pork was great, or in Michael’s words, “Good. Real good!” 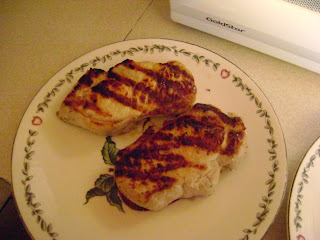 A few weeks after I first used the marinade on pork, I made up a batch for Michael’s brother in-law, Don, to cook up on his backyard charcoal grill. He, his wife, Lisa, and his mother, Sharon, all thought it was delicious.
Also on my menu for this weekend, I’m making Mamaw’s Broccoli Salad. It is full of broccoli florets, raisins, sunflower seeds and bacon. I’ve never made it before, but Lisa loves the one they serve at a favorite local restaurant, The Pad. She asked me to try to make it for a bridal shower tomorrow. I tasted it, and the salad dressing seems close to one you would use on cole slaw. After some research on the internet, I happened to be talking to Mom on the telephone and asked if she had a recipe for the dish. Turned out the one she had was from my grandmother, Mamaw. I have Mamaw’s recipe file, which she gave to me many years ago, so I looked inside. Sure enough, I had the recipe all along.


Here are both the Mediterranean Marinade and Mamaw’s Broccoli Salad recipes for you to try. I hope they make a nice addition to your holiday cookouts. If you do try them out, let me know what you think. And I’ll let you know how what everyone says about the salad at the shower.
Mediterranean Marinade
Serves 4
4 boneless, skinless chic breasts or 4 boneless pork chops
1 teaspoon dried oregano (for chicken) or ground rosemary (for pork)
Juice of 1 lemon
2 cloves garlic, finely chopped
1/2 medium onion, sliced
1/2 cup olive oil
1 teaspoon salt
1/2 teaspoon black pepper

In a zippered, plastic bag, place the chicken or pork. In a small bowl, whisk together the remaining ingredients and pour over the meat. Seal the bag and allow to marinate in the refrigerator for at least 2 hours.

Mix sauce and pour over other ingredients. Refrigerate for 2 hours.
Posted by A Sunflower Life at 4:10:00 PM

Update: The salad was a big success at the bridal shower, with many requests for the recipe. I made a double batch so I could also serve it at a cookout later in the day. I doubled all of the ingredients except for the bacon since two pounds of bacon seemed like a lot.