A few years ago—2005, to be exact—a neighbor in New Hampshire asked me to make a couple of Halloween-themed treats for her daughter’s birthday party. I came up with these two recipes. 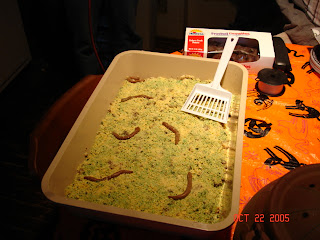 The Litter Box Cake looks gross, which is probably why the kids loved it! And don’t let the looks fool you. It tastes wonderful! 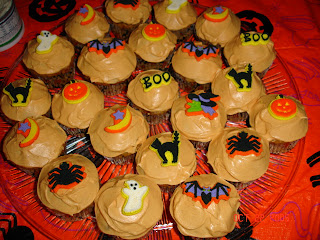 The Pumpkin Cupcakes with Cinnamon Cream Cheese Frosting have a more appetizing appearance, and the kids devoured them, too.


Two treats to tame the most ghoulish of appetites. 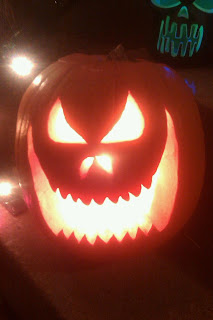 Jack-o-Lantern History
The carving of jack-o-lanterns comes from a centuries-old Irish myth about a man named Stingy Jack. He was such an unsavory character that, when he died, God wouldn’t let him into Heaven and the Devil, whom he had tricked one too many times, wouldn’t let him into Hell. So, Stingy Jack was doomed to wander the Earth with only a burning coal in a carved-out turnip lantern to light his way. Jack of the Lantern soon became known as just Jack O’Lantern and people began to carve scary faces in turnips or potatoes to frighten away both Stingy Jack and other evil spirits. Immigrants to the United States made their scary lanterns from our native pumpkins, a tradition that continues today. 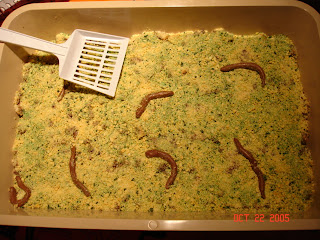 Litter Box Cake
To make it look real, use a new plastic cat litter box and pooper scooper for serving. Also, you can make both cakes for the recipe from scratch, but I used boxed cake mixes to save time.


Prepare cake mixes and bake according to directions. (I made them both in 9 x 13 inch pans.)


Grind up vanilla wafers in small batches in a food processor. Set aside all but 1/4 cup. To the 14 cup, add a few drops of green food coloring and mix until completely colored.

When the cakes are cooled to room temperature, crumble into a large bowl. Toss with half the vanilla wafer crumbs and the chilled pudding. Important: Mix in just enough of the pudding to moisten it. You don’t want it soggy. Combine gently.

Put the cake/pudding/cookie mixture into the litter box.


Put three unwrapped Tootsie Rolls in a microwave safe dish and heat until soft and pliable. Sahpe ends so they are no longer blunt, curing slightly. Repet with thee more Tootsie Rolls. Burry them into the mixture. Sprinkle the other half of the wafer crumbs over the top. Scatter the green cookie crumbs lightly on top of everything.


Microwave the remaining Tootsie Rolls, shape, and place on tope of the cake, rolling them slightly in the cookie crumbs. 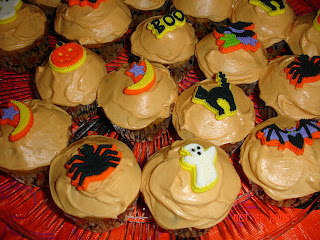 In a medium bowl or on waxed paper, sift together the flour baking powder and spices. Set aside.

In a large mixing bowl, stir together the oil and sugar. Whisk in the eggs, one at a time. Add the vanilla.

Slowly add the flour mixture and mix until well combined. Add the pumpkin and stir until just combined.

Divide the batter between the cupcake cups. (They will be fairly full.) Bake for 20 minutes or until a toothpick comes out clean. Allow the cupcakes to cool in the muffin tin for 10 minutes, and then remove them onto a rack to finish cooling.

To make the frosting, place all of the ingredients in a large mixing bowl. Beat until smooth. Use 10 drops of yellow food coloring and 2 drop of red to make the frosting orange. Frost cooled cupcakes.
Posted by A Sunflower Life at 12:04:00 PM

This post makes me wish my kids were still little---I would have made both of these!