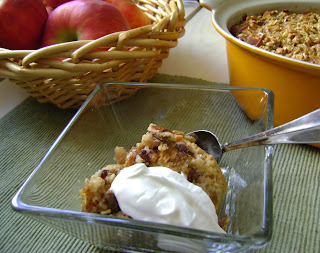 I have craved apples ever since the first hints of autumn began to change the leaves from green to russet, gold, and orange. So I was thrilled when W. W. Norton and Company sent me a copy of The Apple Lover’s Cookbook by Amy Traverso. All you could possibly want to know about apples can be found in this book, from the history and a primer on what apples work best in particular dishes, to cider tasting notes and where to buy mail-order apples. 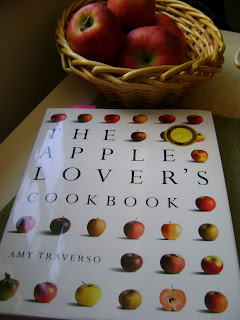 Plus, Traverso has included a large recipe selection, both sweet and savory. You should see all of the Post-It flags sticking out of my copy. I’ll be making apple dishes well into winter!


My first selection was Baked Apple Oatmeal Pudding, primarily because I was hungry for breakfast at the time. This recipe is similar to bread pudding, except old-fashioned oatmeal is used instead of bread. The flavor was wonderful. I tried it first served warm with a dollop of plain Greek yogurt, as the recipe suggested. It was good, but I liked it even better the next day warm with a bit of half and half poured over the top. Just reheat a bowl full in the microwave and then pour on the half and half. Cream would also be lovely, whipped or not. 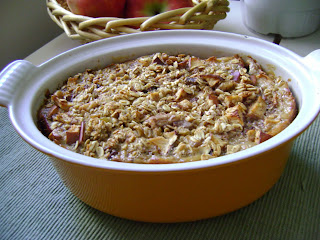 My only recipe adjustments were to increase the amount of cinnamon and add a little nutmeg. Plus I used walnuts instead of the called-for pecans, only because that’s what I had on-hand.


Yummm! Now I have a warm, delicious and satisfying breakfast for the entire week.


Preheat the oven to 325 degrees F. Butter the inside of a 2-quart baking dish and set aside.


In a medium mixing bowl, stir together the oatmeal, baking powder, salt, walnuts, dried fruit, and apples. Set aside.


In a large mixing bowl, whisk together the milk, eggs, brown sugar, cinnamon and nutmeg. Stir in the oatmeal mixture to combine.


Pour the batter into the prepared baking dish. Place into the oven and bake until the center is set and the top is golden brown, between 50 to 60 minutes. Serve warm.
Posted by A Sunflower Life at 11:14:00 AM

Can you make that in sugar free or low calorie...lol

I have regular salt. Does regular-vs-kosher really matter?

Stacey, for regular salt, just use half the amount, or 3/8 teaspoon.

Kim, this recipe really isn't that bad, but you could cut back on the brown sugar if you'd like! :)