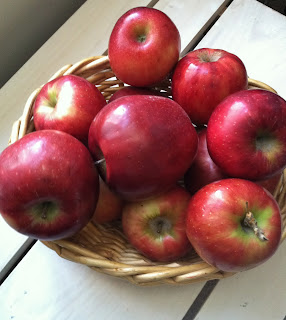 My love affair with apples continues, this time paired with my love for schnitzel. Before you think this traditional German dish is too complicated to make, just realize that you probably already do! Have you ever breaded and skillet-fried a piece of meat? That’s schnitzel!


I got the inspiration for this recipe from Jamie Oliver’s cookbook, Cook with Jamie. I liked his idea of serving schnitzel with a spicy apple sauce. The sauce’s sweetness and seasoning matches nicely with the crispy meat.


Schnitzel can be made with pork, chicken or veal. I went with pork…two center-cut boneless pork chops, to be exact. I also used panko bread crumbs for extra crunch, mixed with some dried sage for extra flavor. (I love sage with pork.) Plus, since I knew The Picky Eater wouldn’t care for the apple sauce, I made some oven-roasted French fries seasoned with a little rosemary, inspired by the Highlands Ranch Foodie. 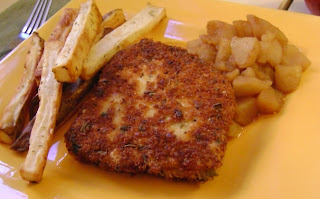 The Picky Eater cleaned his plate, and so did I! Next time I may add some red chili pepper flakes to the apple sauce for a bit of heat and savoriness. 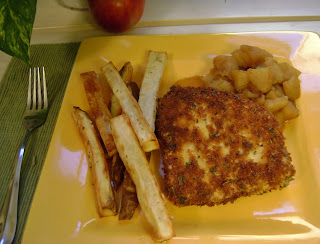 To make the apple sauce, melt the butter over medium heat in a saucepan. Add the orange zest and juice, plus the sugar and spices. Bring to a bubble, and then add the apples. Cover and simmer over low heat until the apples soften and begin to break down, about 20 to 25 minutes. Keep warm or allow to cool to room temperature, depending on how you like it.


To make the schnitzel, place the pork chops in a gallon-sized zipper bag, but do not close. Flatten the chops with a meat tenderizer or rolling pin until they are 1/4-inch thick.


Test the oil in the skilled by dropping in a couple of bread crumbs. If they sizzle, you are ready to fry. Place the pork chops into the skilled and cook until the chops are golden brown, about 2 to 3 minutes. Turn the chops over and continue to cook until golden brown. The internal temperature should be 145 degrees. Place the chops on a paper-towel-coverd plate, season with more salt and pepper if desired, and allow to rest for 3 minutes.


Just before serving, spritz the top of the pork chops with a little lemon juice. Serve with a spoonful of the apple sauce on the side.
Posted by A Sunflower Life at 11:10:00 AM

I've been wanting to make schnitzel because I had it at a restaurant a couple months ago. Delicious. What I had was made with veal. I love his idea apple sauce.

We love schnitzel ... it is such a staple restaurant dish in Germany. Every gasthaus has their own version ... yours looks wonderful!