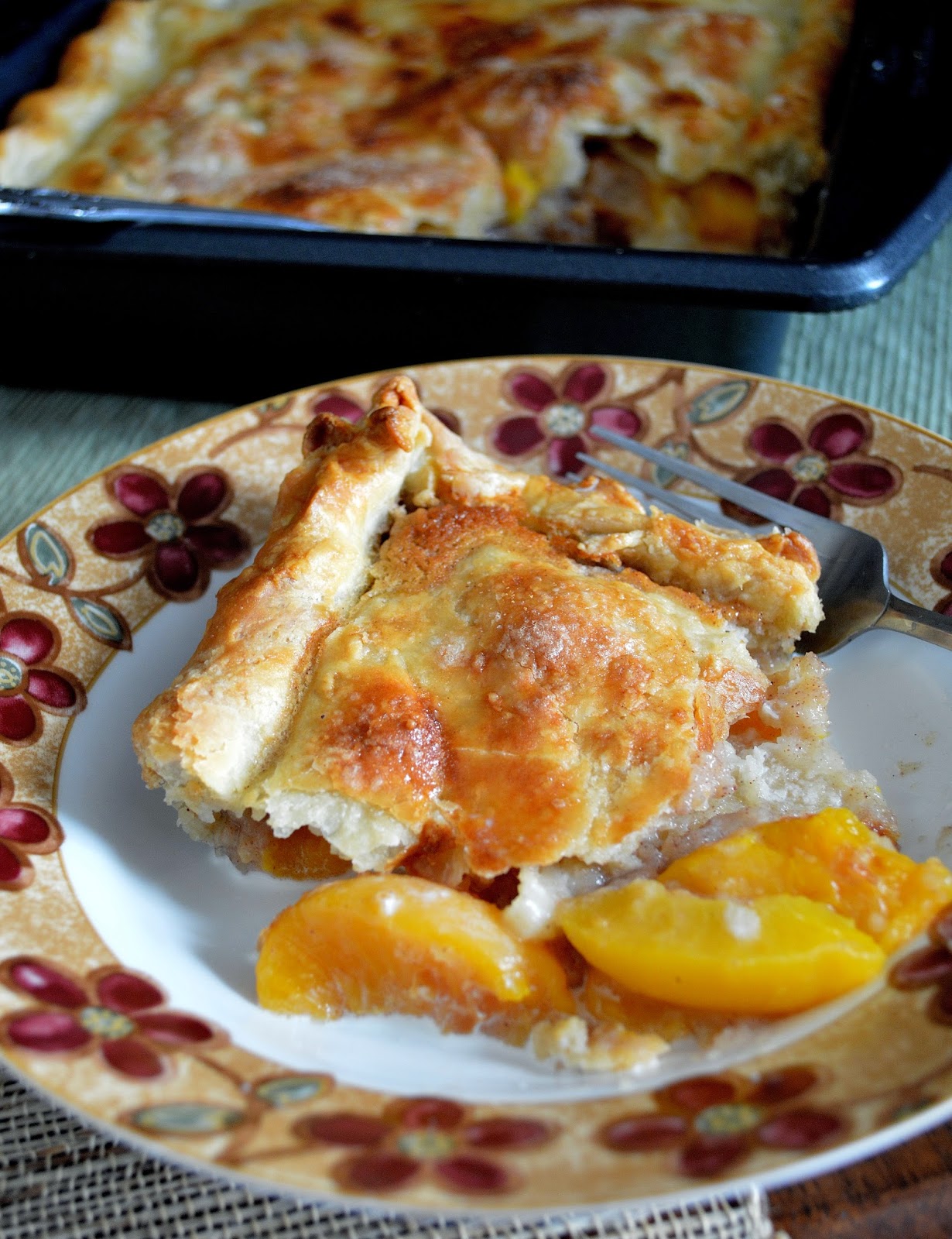 The plan was to post this recipe on Father’s Day.

After my dad died from cancer on March 26, I wanted to honor him by posting his recipe for peach cobbler on Father’s Day. My dad was a pro at making this dessert.

Then The Picky Eater died three days before Father’s Day, and the sadness I felt at losing my father was washed up in the tidal wave of grief that comes with losing your husband and soul mate.

Four months have passed since The Picky Eater’s death, and I’m beginning to surface from the flood of sadness and pain. Plus, I recently made Dad’s cobbler for three occasions: 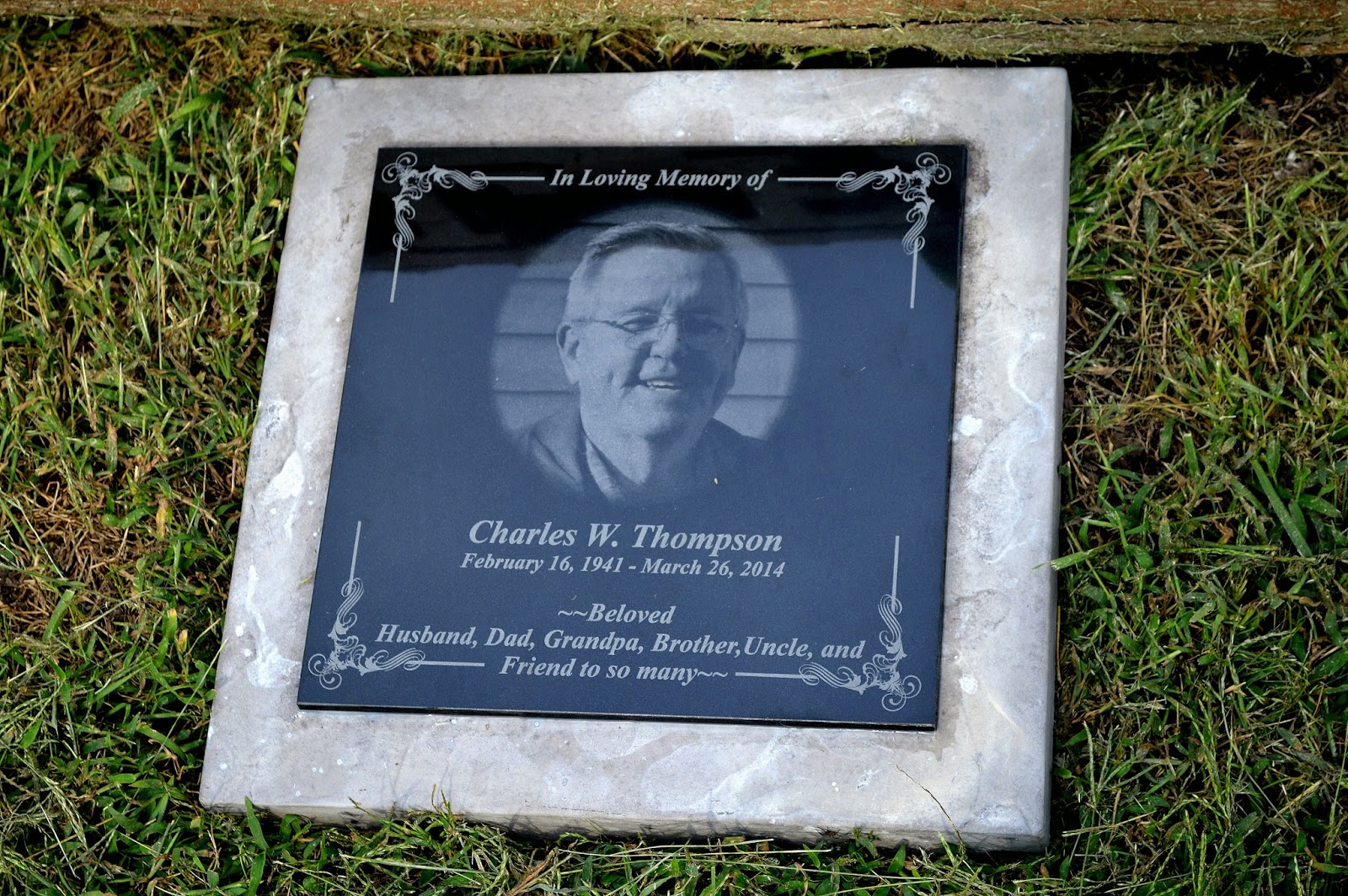 One was a gathering where we dedicated a memorial placed on the family farm in his honor…and my sister surprised us all by getting married!

Another was for my brother-in-law ’s birthday. He loves peach cobbler and ate it all by himself,
starting at the center of the dessert and moving outward.

The third was just for me, because I wanted some to enjoy while I remembered. 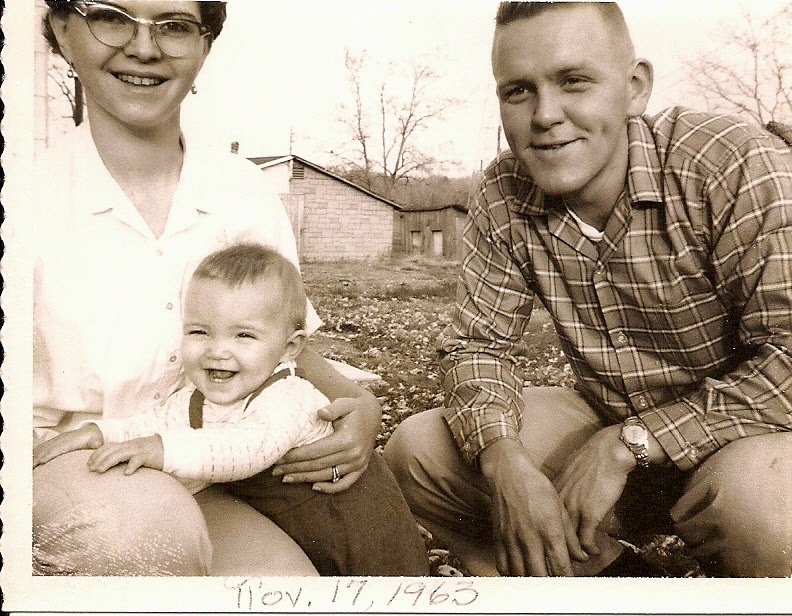 Dad was a rock of a man. It is still hard to picture the world without him in it. He worked hard to support his family, chased his dreams when he could, donated his time to causes that were important to him, and made friends with everyone. So many friends, in fact, that his memorial service filled the church my parents attended.

My dad taught me: 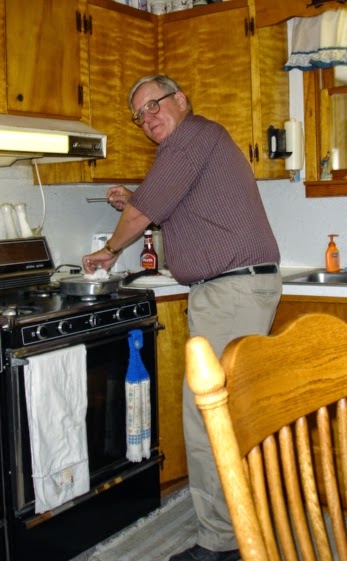 Dad made his cobbler in an 11- by 7-inch baking dish, but I had trouble rolling out the dough to fit the dish, so I recommend a 9- by 9-inch one instead. Feel free to use your own crust recipe or one of the ready-made crusts available at the grocery store. The dish is meant to look rustic, so don’t fret too much about the way the crust looks. (Mom told me there were times Dad would get so frustrated with his crust that he would throw it away and start again!) The warm cobbler tastes wonderful with a scoop of vanilla ice cream, but I also like it as Dad did, with some cold milk poured on top. (The picture is of the hand-written recipe Dad gave me years ago.) 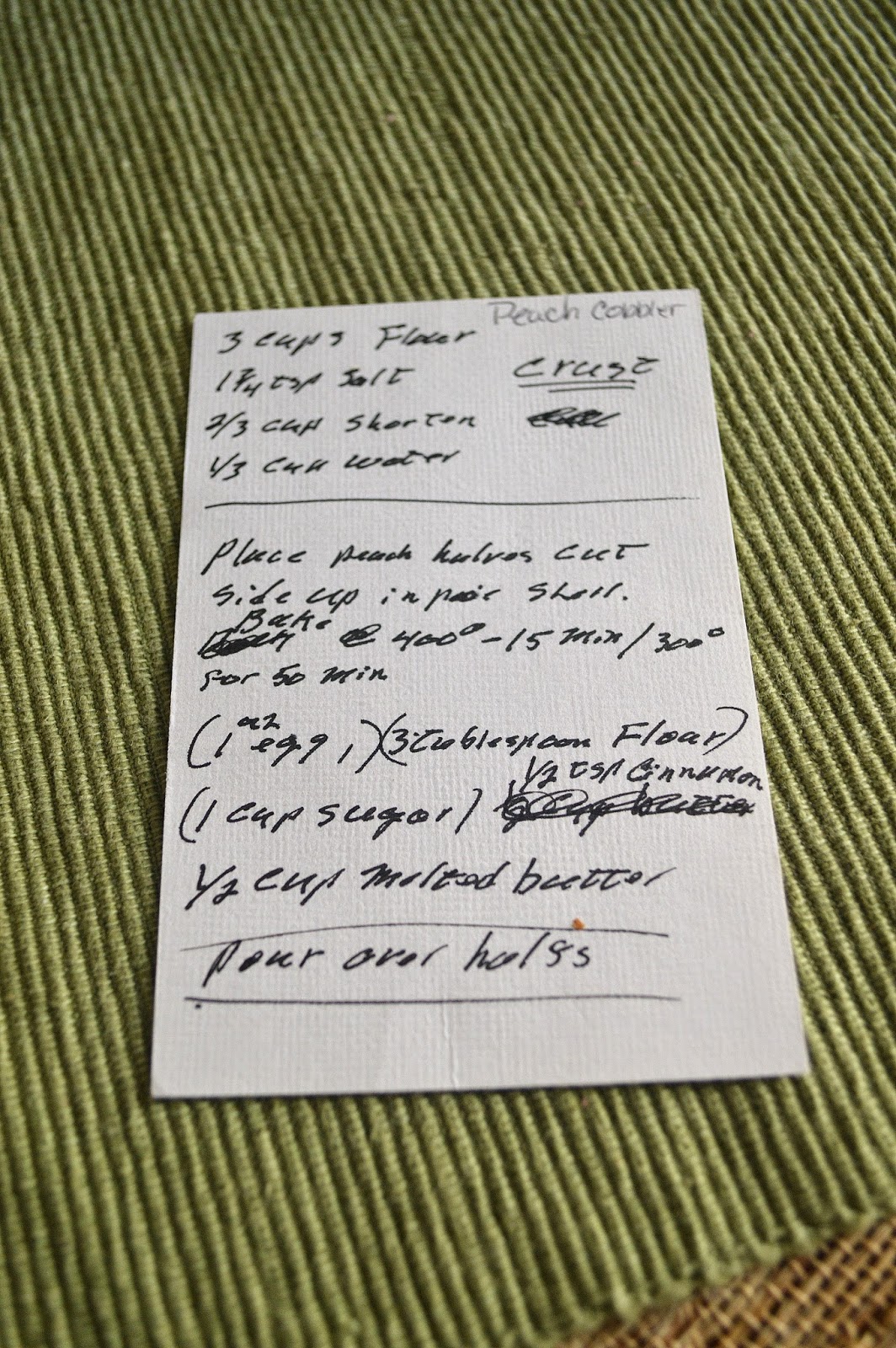 In a large bowl, or a food processor, mix together the flour and salt. Cut in the butter and shortening, or pulse with the food processor, until the mixture resembles course sand. Mix in just enough water to form the dough into a ball. Divide the dough in half, flatten into disks, wrap in plastic, and chill for at least 30 minutes. 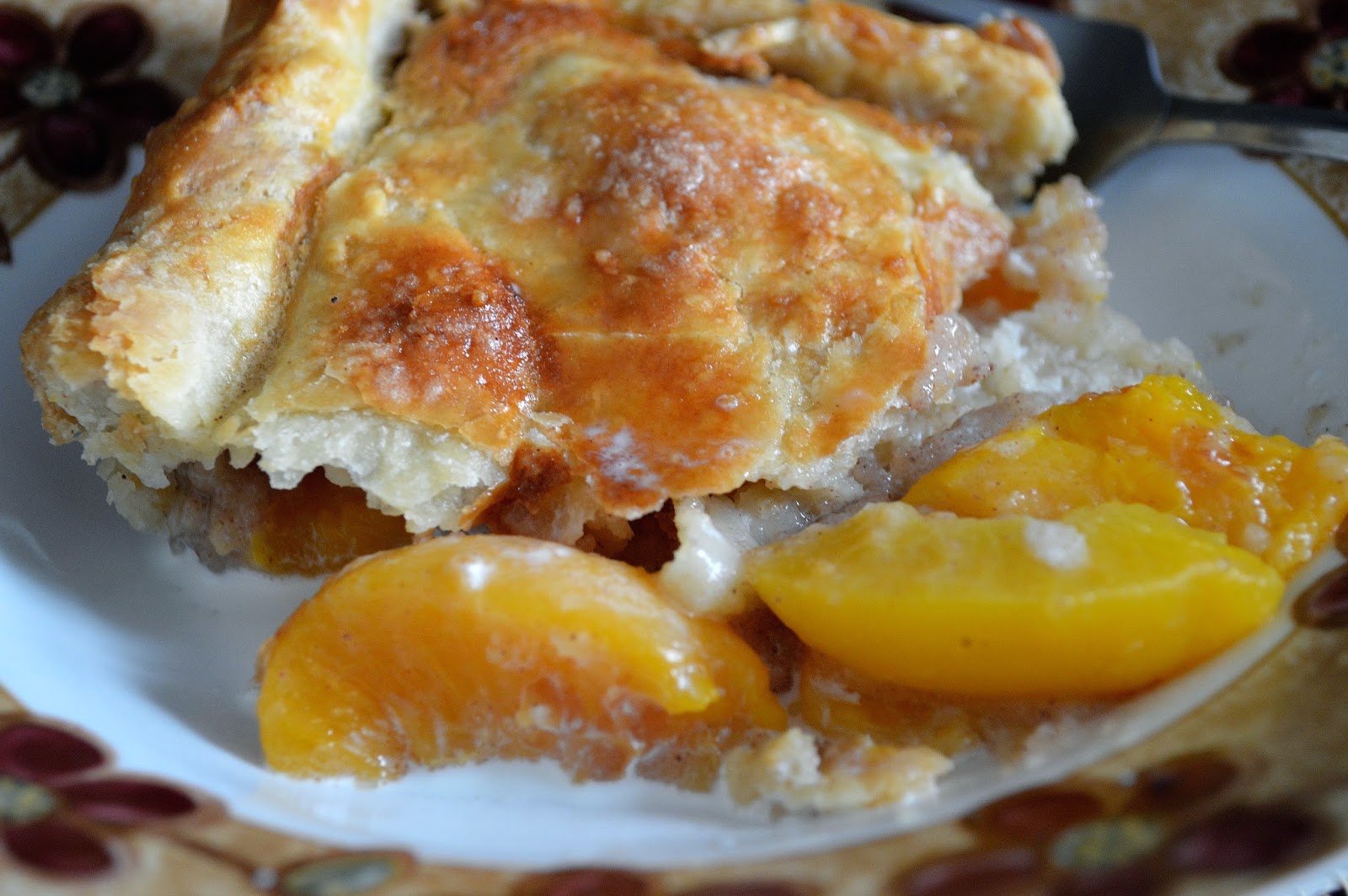 Preheat oven to 400 degrees F. Roll out one half of the dough to 1/4-inch thickness. Place into a deep-sided, 9- x 9-inch baking dish. Add the peach halves, cut side up. (You may not have room for all of the peaches.)
In a small bowl, mix together one egg, flour, sugar, cinnamon, nutmeg and melted butter. Spoon over the peach peaches.

Roll out the remaining half of dough. Place on top of peaches and crimp together the edges. Make slits in the top crust to allow the steam to escape. Place into the freezer for 5 minutes to chill.

Beat together the remaining egg and water to make an egg wash. Remove the cobbler from the freezer and brush on top of crust with the egg wash. Sprinkle with a little sugar.

Bake at 400 degrees for 15 minutes. Reduce heat to 300 degrees and continue to bake for 40 to 50 minutes or until crust is brown and juice is bubbling from the slits. Serve warm with vanilla ice cream, whipped cream or a little milk on top. 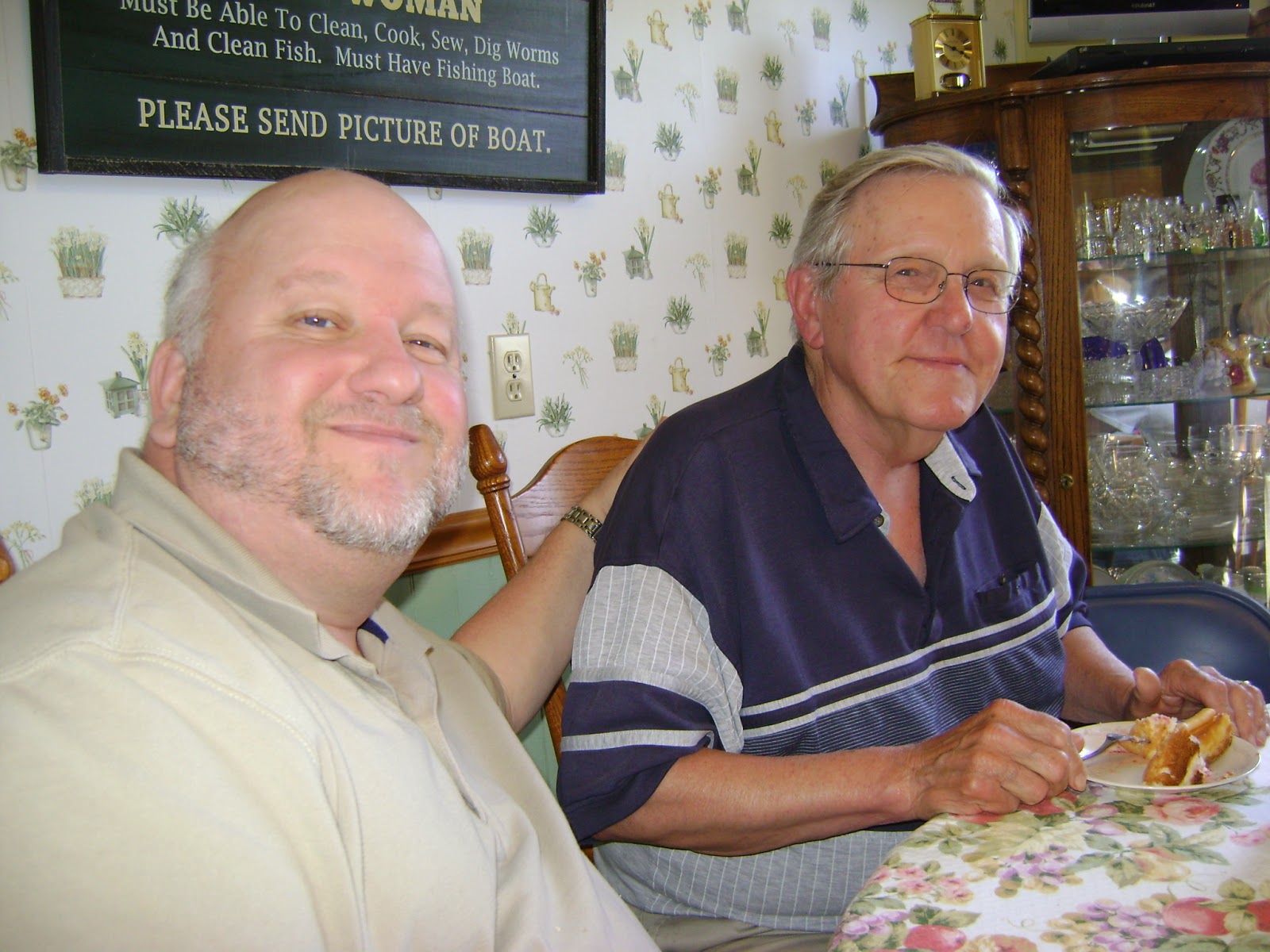 Great post Linda! Kait and I will have to try it sometime. Hope you're doing well.

How wonderful to have a special dish your father made to keep his memory alive.

I'm so sorry for your loss, Linda... Your dad sounds like a wonderful man!! Thank you for passing along his recipe.

Ah, the lessons we learn from our Dads! I'm glad he passed this sweet one on, Linda! It's a doozy! I can see his features in your sweet baby face in that first photo!

I'm very sorry to hear of your losses. I'm glad you have this dish to remind you of your dad.