Everyone in a successful relationship has to learn to live with the other person’s quirks. We all have them. In our household, they include how to place the toilet paper roll on the holder (I like it to roll over the top and Michael--best known as The Picky Eater--likes it to roll from underneath), where to put the dirty dishes (I put them to the left of the sink and The Picky Eater puts them to the right), and the car radio (he leaves it on when he gets out of the car and I turn it off.) These types of quirks are minor ones we all learn to compromise over so we can live in harmony. No sweating the little stuff!

There are also food quirks we learn to live with each day. The Picky Eater likes Miracle Whip on his sandwiches and I like mayonnaise. (I think this is a Midwestern taste since I also grew up with Miracle Whip and only changed after I moved east. I still use it for potato salad.) I like all kinds of vegetables, including asparagus, broccoli, cauliflower, and beets. The Picky Eater will only eat corn, green beans, carrots, celery, and tomatoes, plus basic lettuce salad with lots of Dorothy Lynch or Ott’s salad dressing. He also likes to eat a big breakfast, complete with eggs, sausage, hash browns and toast, while I don’t like to eat breakfast much at all. If I do, it’s usually just yogurt or cereal.

We both quickly learned there are two food items that we will never be without in our house—coffee and ketchup. The coffee is for me—the day just doesn’t start right without it. And I like the expensive stuff in the bag, not the can. (What can I say—I’m a coffee snob.) The Picky Eater doesn’t drink coffee. (He loves Earl Grey tea, so I forgive him the coffee thing.)


The ketchup is for Michael. He loves the stuff and puts it on just about everything! I call him a ketchup fiend, and his daughter Jaime is just as bad. I keep saying we should buy stock in a ketchup company so we can recoup some of our ketchup expenditures. I do like it on my hamburger and French fries, but I can live without it. 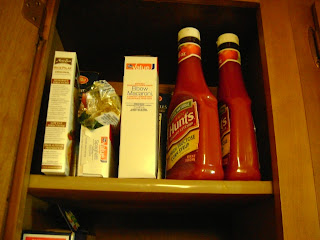 Not long after we met, The Picky Eater started asking me to make goulash. My first question was what kind—the traditional with chunks of beef and paprika, or the kind I knew from my childhood made with hamburger, elbow macaroni, and tomatoes? (What people in call American chop suey.) He said wanted the kind with lots of ketchup that his daughter makes.


I Googled goulash with ketchup, and there are recipes out there with it as an ingredient. But just to be sure, I asked Jaime for the recipe. When she e-mailed it, I was surprised. The ingredient list included tomato soup and cheddar cheese soup. No ketchup! When I asked about the missing ingredient, she wrote that she just squirts in a little ketchup since she and her dad both like it.

So I made the recipe and included 1/2 cup of ketchup, and then had The Picky Eater come in to test it. His immediate response was, “It tastes like tomato soup [which he hates]. Did you put ketchup in it? It needs more.”

Yesterday I decided to make my childhood version of goulash. As I was cooking, The Picky Eater kept asking, “Do you have a backup plan just in case this doesn’t work?” I suggested he keep an open mind, and that we had ham sandwiches in an emergency. 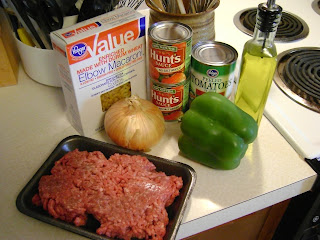 When we sat down to eat, the goulash was—okay. It tasted good, but something was missing. My mom put chili powder in hers, and I know some people put Italian seasoning in the dish, so perhaps that was the issue. The Picky Eater grabbed his ever-available bottle of ketchup and put in a small squirt. He then started to eat away and said he liked it. So, I decided to give it a try, and it turns out ketchup was the missing ingredient. I loved it! It doesn’t take much—I would only add about 1/2 cup to the recipe, but it really makes the dish! 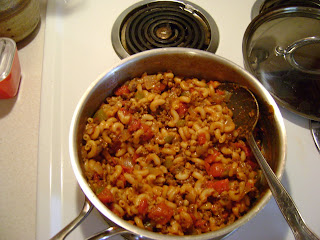 Here are both recipes so you can try them out for yourself. And now I have a new-found respect for ketchup!


Cook beef in skillet until browned. Pour off fat. Add soups, water, pasta and ketchup. Heat to a boil. Cook over medium heat 10 minutes or until pasta is done, stirring often.

Brown ground sirloin in a deep skillet or Dutch oven until just brown. Add onion and green pepper, and continue to cook until onion is translucent. Drain off any excess fat. Add remaining ingredients, lower the heat to simmer, cover and cook for 15 to 20 minutes, or until the macaroni is soft. (This dish also tastes good with a little parmesan cheese sprinkled on top!)
Posted by A Sunflower Life at 8:33:00 AM

I plan on trying both thanks Linda~~~~ Chantal

Great Chantal! Let me know what you think!