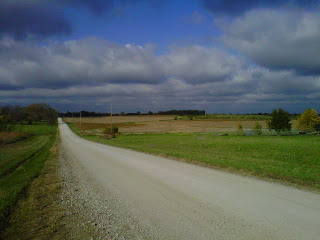 One year ago, after almost 20 years of living in , I drove I-70 into and a new life. I settled into a great house in , renting a new basement room from my friend Derrick. He and his 12 year old daughter showed me around my new area. I was writing for both and magazines, plus I returned to a career as a Montessori preschool teacher—something I did for four years in and . All was well.


Then my life completely changed—again!
In an effort to meet new people and see even more of my new state, I signed up on Match.com. I was a little nervous at first, but I knew a great couple, Tara and Tim, who met through this dating Web site, married, and just had their first child. Plus, I wasn’t necessarily looking for a relationship. After my divorce and a couple of misses in the romance department, I was more interested in having fun, meeting new people, and seeing what the areas had to offer.


I got responses right from the start! Derrick’s daughter and I sat at the dinning room table looking over the profiles. She proved to be a very insightful advisor regarding which men I should reject and the ones I should consider. We still joke about the one we nick-named Psycho Santa. Imagine the Unabomber crossed with Santa Claus. I still shiver at the memory!
I started communicating with three men via e-mail. One in particular, Michael, seemed very nice. He asked me out for dinner one Thursday evening, which happened to be Veterans Day. We arranged to meet at the local Dillon’s grocery store parking lot, and then I would follow him north to the Prairie Band Casino for dinner. I had heard good things about the food at the three restaurants housed in the casino, so I was looking forward to the evening.
Michael turned out to be the love of my life!


Believe me, I was as surprised as anyone to have found the man I had been looking for my whole life on my first time out in the online dating world. Michael is 52 years old and has his own business as a currier. He has two grown children—Mike, Jr. who is married, just graduated from law school and going for his MBA, and Jamie, who is also married and just graduated from college with a marketing degree. 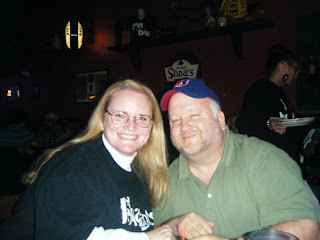 Long story short, I now live in downtown with Michael. (The state capitol building is right outside our door!) On June 6, he proposed to me in the same grocery store parking lot where we met. We are getting married on Christmas Eve morning. 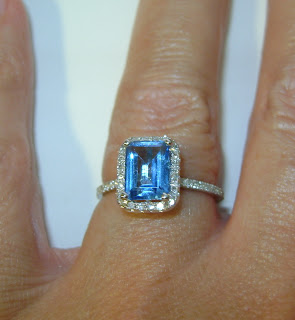 Now that I’m settled in my second new home of the year, I promise to write more frequently. There is a lot to talk about! And don’t worry—food will be a large part of the conversation. I have a bunch of new recipes and restaurants to share!
Posted by A Sunflower Life at 8:43:00 PM

Congratulations on the engagement. Come out and visit Sarra and I once in a while. Glad we could be the jumping off point for your new life.