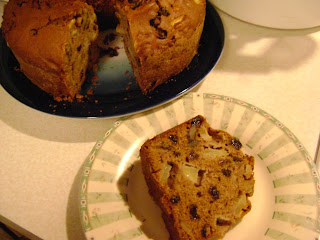 A few weeks ago, I wrote a post featuring an apple cake recipe from The Essential New York Times Cookbook by Hesser. I noted in the post the cake didn’t turn out quite the way I imagined. Since the notes with the recipe said it would be good for breakfast, I was expecting a cake that was more like a quick bread or coffee cake, especially since it was baked in a tube pan. What I got was—well, cake! It was very sweet—too sweet for my taste, which for those of you who know me is a big surprise. It also had too much oil for my liking.

So I decided to create a healthier version of the cake. One I would eat for breakfast. Besides trading out one cup of all-purpose flour for the whole wheat variety, I also cut the sugar in half, and I cut the oil in half and replaced it with unsweetened applesauce. (After all, it is an apple cake.) 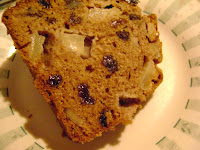 The result was more to my liking. Sweet but not too sweet. And yummy toasted with a bit of butter. The perfect apple cake for breakfast or a snack. It could also be dressed up for dessert by baking it in a bundt pan and drizzling a vanilla icing glaze over the top. (Next time I may trade the raisins for dried cranberries.)


So now you have a choice—the original “naughty” version or the new “nice” version. If you try either, let me know what you think. 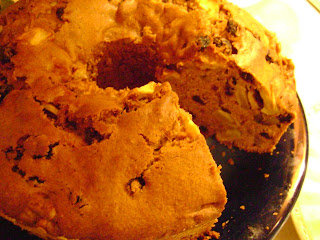 
Heat the oven to 350 degrees. Butter and flour a 9-inch tube pan. Sift together the flour, salt, cinnamon, and baking soda.


Beat the oil and sugar together in a mixer with a paddle (or in a bowl with a hand mixer) for 5 minutes. Add the applesauce and eggs. Beat until the mixture is creamy. Stir in the dry ingredients. Add the vanilla, apples, walnuts, and raisins and stir until combined. 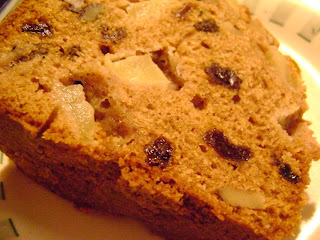 Turn the batter into the prepared pan. Bake for 1 hour and 15 minutes, or until a toothpick inserted in the center comes out clean. Cool in the pan before turning out.
Posted by A Sunflower Life at 9:25:00 PM

It's always so difficult to choose between naughty and nice..... ;-)

Beautiful cake! So moist and delicious looking! I need to make this.

As someone who is addicted to apple cake, I would be fine with doing and savoring both. I can have my breakfast and dessert and happily eat it, too.

It still looks really moist and delicious even with your healthy tinkering, it's a winner!