Clafouti and Thank You, Judith Jones 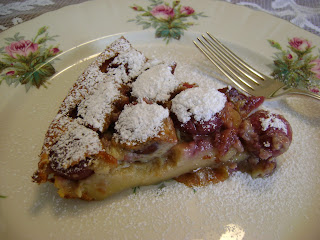 Food lovers and the literary world owe a debt of gratitude to Judith Jones. 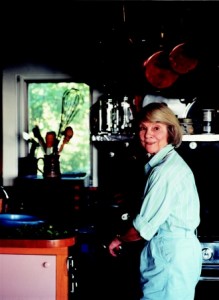 Number eight on the Gourmet Live 50 Women Game-Changers list, Jones is responsible not only for bringing Julia Child to the attention of the world with one of the best-known cookbooks of all time, but she also is gave us Anne Frank’s The Diary of a Young Girl. She is senior editor and vice president at Alfred A. Knopf, where she helped develop the cookbooks of other well-known chefs, such as Lidia Bastianich, James Beard, Marion Cunningham, Jacques Pepin, Marcella Hazen, and Madhur Jaffrey. Plus, she is an author in her own right, with the books such as her autobiography The Tenth Muse: My Life in Food, and cookbooks like The Pleasures of Cooking for One and The Book of New New England Cookery. (Image is from Jones's website.)


For me, I will be forever grateful to Jones for seeing the possibilities in Mastering the Art of French Cooking. Julia Child is one of my personal heroes, and if Jones hadn’t championed her efforts, we may never have met this dynamic cook. 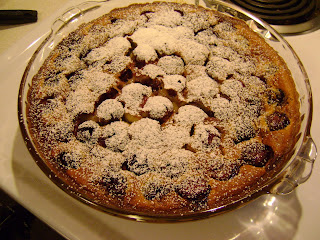 In her honor, and because cherries are coming into season, I decided to make Clafouti from Mastering. The aroma of cherries and vanilla filled our apartment as it baked. Though not the prettiest dessert, which may be why the recipe calls for a dusting of powdered sugar over the top, the flavor was wonderful. Its texture is somewhere between custard and a tart. The whole cherries make it a little difficult to cut, but plunge ahead and don’t worry about the look. The taste is worth it! I served it warm as a dessert, but I saw other cooks suggest eating it for breakfast.


Can’t wait for tomorrow morning to get here.


On the other hand, maybe I’ll just have seconds.


Put into a blender (or large bowl) the milk, granulated sugar, eggs, vanilla, salt, and flour. Blend for 1 minute until smooth. (I used a hand blender for 2 minutes.)


Pour a 1/4-inch layer of batter into the baking dish. Place into the oven a bake until just set, about 5 minutes. Remove from the oven and add the cherries. Sprinkle the remaining 1/3 cup sugar over the top, and then pour on the rest of the batter. Place the dish back into the oven and bake until the clafouti is buffed and browned, and a knife placed in the center comes out clean. The cookbook says it should take about an hour. Mine took 45 minutes, so keep an eye on it!

Clafouti should be served warm with a dusting of powdered sugar.

Oh I think I just may have to run out and get some cherries! Looks good!!

What a perfect choice, Linda. It is a delicious dish and that recipe is classic. Have a wonderful weekend.Blessings...Mary

I haven't been following the Gourmet Game Changers list but I must say, there are a few on that list which I do admire and Judith Jones is certainly one of them. As you say Linda, she is sometimes in the shadows so I am delighted to see a tribute to her and some of her accomplishments.

Your Clafouti looks delicious and I thank you so much for sharing...

I adore Judith Jones' attitude and adventurous spirit ... her autobiography/memoir 'The Tenth Muse- My Life in Food' is an excellent read ...your clafouti is the perfect dish for this time of year! Cherries are plentiful right now! Just gorgeous, Linda! Enjoy!

I've never heard of Judith Jones, but I'll think of her next time I eat chaflauti—which may be soon.