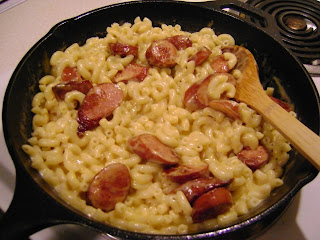 As you know, my husband, Michael, is very choosy about the food he eats, which is why I call him The Picky Eater. So, when he mentions that a recipe looks like a good one, of course I’m going to make it!


That’s what happened on a recent Sunday. My Picky Eater saw an advertisement from Johnsonville that included a recipe for their Kielbasa Mac n Cheese. He said it looked good. I took the recipe out of his hand and we got the ingredients on a trip to the grocery store later that day.


Of course, as a food writer, I am compelled by nature to change recipes. My mom asked me a couple of weeks ago, “Is there ever a recipe you don’t change?”


The first change was in the brand of kielbasa. Sorry Johnsonville, but my husband is loyal to Hillshire Farm, and being the picky eater he is, doesn’t want to try any other brand. Then, as I started to make the dish, I realized I had inadvertently picked up the “lite” kielbasa, made with turkey, beef and pork. Thank goodness The Picky Eater didn’t notice the difference! 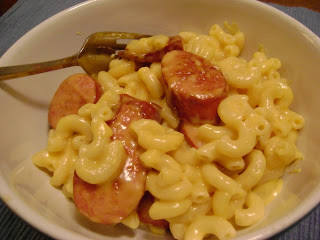 The recipe also called for evaporated milk, which I don’t usually keep on hand. So I just used whole milk and adjusted the water and milk measurements. Plus it includes hot sauce that I left out since The Picky Eater doesn’t like spicy food. However, I do, so I added a little to my dish, but in the recipe I would be tempted to just use cayenne pepper.  I also cut most of the recipe in half since the original makes a large amount and I only needed enough for two people.


The Picky Eater liked it! So did It would be fun to play around with different cheeses in this dish, such as gruyere, blue, provolone, or goat cheese, and my husband suggested using shell pasta instead of elbow macaroni next time. Then again, why tamper with success!


In a skillet (I used my well-seasoned cast iron), heat the oil over medium-high heat. Add the kielbasa and brown. Remove the browned meat to a plate lined with paper towels and set aside. Wipe out the skillet to get rid of any excess oil.


Add the water and salt to the skillet and bring to a boil. Add the macaroni and cook until al dente, about 8 minutes. Be sure to stir often to prevent sticking. When done, most of the water will be absorbed into the pasta. Add more water if the skillet becomes too dry. If there is a little water left in the skillet, just leave it. It won’t hurt the dish.


Whisk together the milk, cornstarch, and hot sauce (if using). Pour it into the skilled with the cooked macaroni. Bring the milk to a simmer and cook for about 1 minute. Remove the skillet from the heat and add in the cheeses and cooked kielbasa. Stir until the cheese melts. Add salt and pepper, to taste. (Be careful with the salt since both the cheese and kielbasa are already salty. You may not need extra.)
Posted by A Sunflower Life at 8:35:00 PM

He does sound picky, lol. Mine has his favorites, but lucky for me he is also a guinea pig and will shovel most things in his mouth I put in front of him. He would enjoy shoveling this in. Happy Friday, hope you have a great weekend.
-Gina-

My huby is really fussy too - it;s funny though how you can substitue stuff occasionally and theya re none the wiser - I love it when he tries comething and goes 'oh yeah, that's nice!