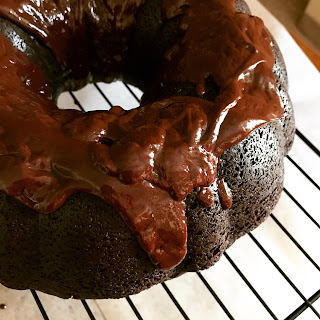 Okay, I’ll be brave and admit it: I hate Valentine’s Day. All my life it has been the most disappointing holiday of the year. In school, I got lots of Valentine’s in my carefully decorated shoebox, but never one from that special boy who held my heart at the time…probably because he didn’t know about my crush on him. I never had a secret admirer, or if I did, he was so secret he didn’t tell me.

As an adult, I either wasn’t in a relationship or had just ended one when the holiday rolled around. In the decade+ I was with my ex, he saw Valentine’s Day as more of a chore than a special day to show your love how much you cared. 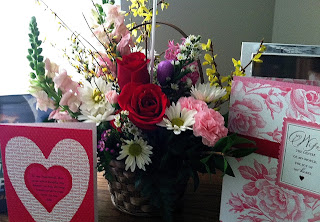 The holiday was at its best the three and a half years I was with my late husband, The Picky Eater. On our first one, he said he was going to cook dinner for me. Considering his lack of culinary interest and skill, I was a bit concerned. However, he was so excited at the prospect, I enthusiastically, if somewhat warily, agreed. Maybe he would let me help?

When the day arrived, The Picky Eater headed to the grocery store. On his way home, he called to say I was banished to the bedroom until dinner was ready! After he got home, I could hear him rustling grocery bags in the kitchen, and the microwave was getting a workout.
Finally, he said dinner was ready. I emerged to a table decorated with flowers, and a meal of fried chicken with all of the fixings—mashed potatoes, gravy, green beans, and rolls—all from the grocery store’s prepared foods section. He stood by the table, grinning, proud of his accomplishment. 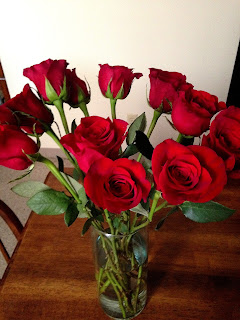 I never felt so loved.

Whether you’re on your own this Valentine’s Day (I once had a group of single friends hold a horror movie marathon on the day!) or with someone special, you can’t go wrong with chocolate to celebrate. While there are all kinds of fancy chocolate treats available, they would be hard pressed to beat out this Bundt cake for chocolate supremacy. It is easy to make and has the most kicked-up chocolate flavor of any cake I’ve ever tasted. It is over-the-top chocolatey!

This cake is so good it will make you look forward to Valentine’s Day, with or without a sweetheart! 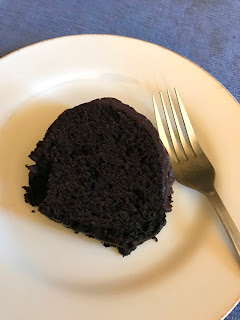 The original recipe says you can use either natural or Dutch-processed unsweetened cocoa powder. I used Hershey’s Special Dark, which is a combination of both types and made the cake wonderfully chocolatey. The recipe also calls for coffee, which doesn’t give it a mocha flavor but does enhance the chocolate flavor even more. However, you can substitute water if you wish. The original recipe also recommends testing the cake for doneness with a piece of uncooked spaghetti, which worked great!

Preheat the oven to 350 degrees F. Spray the Bundt pan with non-stick cooking spray and set aside.

To make the cake: Into a microwave safe bowl, place the coffee, butter, and cocoa powder. Heat on high at 30-second intervals until the butter melts. Remove from the microwave and whisk the ingredients together until smooth, and then set aside to cool for 10 minutes.

In the bowl of a stand mixer, place the sugar, baking powder, baking soda, salt, and flour. Mix for a few seconds to combine.

In a small bowl, whisk together the vanilla, eggs and sour cream. Set aside.

To make the icing: Put the chocolate chips and cream into a microwave-safe bowl or mixing cup. Microwave at 30-second intervals until the cream just begins to bubble. Remove from the microwave and whisk the mixture together until it’s smooth. Pour the icing over the top of the cooled cake.

What a lovely memory Linda. Thank you so much for sharing it with us (I also saw your love letters post again:)

Of course, Extreme Chocolate anything would be high on my list but bake it a bundt and I'm all over it!

Thank you so much for sharing...

Hershey’s Special Dark is a good choice for your bundt cake…it bet it was delicious.

Oh, it was, Karen! It is now my go-to chocolate cake for any occasion!