Patricia Wells and the Recipe that Wasn’t 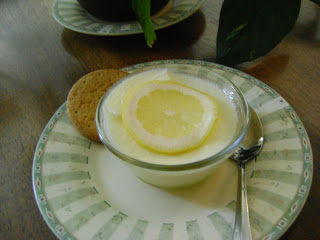 As a certified member of the food-obsessed club (Hi, my name is Linda and I’m a foodaholic), I jump at the chance to try a new recipe. You know, those recipes you read through and your mouth begins to drool until you reach the point when you say to yourself (or even out loud), “I have to make this!”

So when that recipe turns out completely wrong in spite of your best effort, it is oh so very disappointing.
Let me backtrack for a moment: Recently I joined a group of food bloggers who are paying tribute to the Gourmet Live list of 50 Women Game-Changers in the food world. On Fridays we each post a recipe we’ve completed from a woman on the list.
The group has already gone through Julia Child, Alice Waters, Fannie Farmer, Martha Stewart, Irma S. Rombauer and others.


I was thrilled to learn Patricia Wells would be my first “assignment.” I have been enamored with the region of ever since I read Peter Mayle’s book A Year in Provence.  (He is now one of my favorite authors.)
Like Julia Child, Patricia Wells brought to home cooks. Originally from , she now divides her time between homes in and . She has written 12 cookbooks, one of which won the James Beard Award for Best International Cookbook, and she was the only woman restaurant critic for a major French publication in the late 1980s and early 1990s. She was also a restaurant critic for the International Herald Tribune until 2007.  Best of all, she teaches cooking classes both in and . I dream of going to one some day! 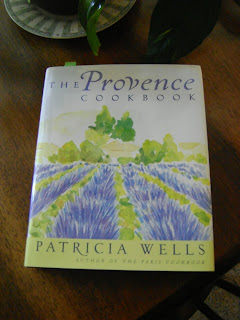 A few years ago I snatched up a copy of Patricia Wells’s The Provence Cookbook, but I never had the opportunity to make something from it. So here was my chance! I’ve been on a lemon kick lately (note my last post), so I chose her Lemon Mousse recipe. To go with it, I selected her Domaine St. Luc’s Almond Cookies.
About the cookies—I don’t know what I did wrong. Maybe it was too humid, since they have a candy-like consistency. Or maybe I didn’t let them bake long enough. The recipe said to bake, “until an even, golden brown, puffy and fragrant, 25 to 30 minutes.” Well, they were golden brown, puffy and fragrant at 20 minutes for me, but maybe I should have left them in for 5 more minutes. Whatever the reason, the cookies did not turn out as planned. I’ll have to try them again. I’ve posted the recipe so you can give them a try. Let me know what happens. 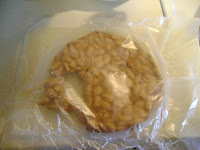 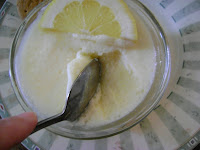 
Preheat the oven to 350 degrees. Using a 9-inch cake pan as a template, cut a round of parchment paper the same size as the pan. Place the parchment in the bottom of the pan. With a pastry brush, brush the paper and the sides of the pan with the oil. Set aside.
In a medium bowl, combine the honey, sugar, flour, and egg white. Beat vigorously with a whisk until the mixture is white and foamy, about 1 minute. Add the almonds and stir to thoroughly coat the nuts. Pour the mixture into the prepared cake pan.
Place the pan in the center of the oven and bake until an even, golden brown, puffy and fragrant, 25 to 30 minutes. (If your oven has hot spots, you may need to rotate the pan halfway through baking.) Remove from the oven and transfer the cake pan to a rack to cool and firm up, about 15 minutes. Carefully cut into 16 wedges. Place on a platter and serve.
Lemon Mousse 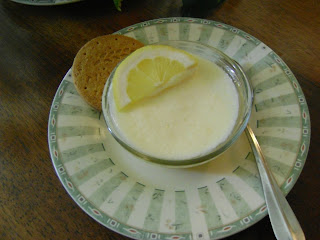 
In the bowl of a heavy-duty mixer, beat the sugar and egg yolks until thick and pail yellow, about 2 minutes. Slowly add the lemon juice, whisking constantly. Whisk in the lemon zest. Set aside.
Pour the hot water into a small bowl. Sprinkle the gelatin over the water an stir until it dissolves. Whisk the gelatin mixture into the lemon mixture. Whisk the yogurt into the lemon mixture, blending thoroughly. Set aside.
In a second bowl of the heavy-duty mixer, beat the egg whites until stiff peaks form. Carefully fold the lemon mixture into the whipped egg whites. Ladle the mixture into ramekins or pots-de-crème. Refrigerate until firm, about 3 hours.
Check out my fellow bloggers who also posted about Patricia Wells. There are some yummy recipes here!
Val - More Than Burnt Toast
Joanne - EatsWell With Others
Taryn - Have Kitchen Will Feed
- The Spice Garden
Claudia -A Seasonal Cook in Turkey
Heather - girlichef
Miranda - Mangoesand Chutney
Jeanette - HealthyLiving
April - Abby Sweets
Katie -Making Michael Pollan Proud
Mary - OnePerfect Bite
Kathleen -Bake Away with Me
Viola - The Life is GoodKitchen
Sue - The View fromGreat Island
Barbara - MovableFeasts
Kathleen - Gonna WantSeconds
Amy - Beloved Green
Posted by A Sunflower Life at 1:56:00 PM

Welcome to the group! I love your lemon mousse! It is so light and fluffy looking! Sorry the cookies didn't turn out...I've had my share of things that didn't go as planned! Lovely post!

Not all recipes turn out as we expected, I guess that is why there are so many thouands of cookbooks, so we can keep trying.

Not all recipes are meant to be -- but that doesn't apply to the lemon mousse. How delightful!

I hate it when I'm anticipating "love" and turn out with "so-so" (or worse). They do sound like they should be fantastic, though...but I'm an almond lover. The mousse...oh my, the mousse...I wish I could snap my fingers and have a serving in front of me. Looks and sounds creamy and delightful! So happy you're cooking along with us =)

The lemon mousse looks amazing. The texture is so smooth. This is a kind of dessert I rarely attempt, but I am also a lemon fiend, so this has to go on my list to make this summer. And, as it happens,I just bought a bag of meyer lemons!
Welcome to our group!

Too bad the cookies didn't turn out as expected, although they probably tasted delicious. The mousse came out so creamy!

The cookies did taste pretty good--a little sticky, like candy. Maybe the humid day was a factor in their failure, too.

Linda, I'm sorry the cookies did not turn out as you had hoped. For what it's worth, I think PW has an oven that is hotter than the ones we use. If you try this again cook them for a loner period of time. Your mousse is cloud-like perfection. I'm so glad you joined our group. You are a great addition to our band of merry "men". I hope you have a wonderful weekend. Blessings...Mary

Oh I'm so sad the cookies didn't turn out the way you wanted them to! The mousse looks perfect though!

As the saying goes, if at first you don't...well, you get the picture! I will try them again soon and let you know what happens.

I love your post because you are so refreshingly honest! We all have those recipes that don't quite work out for one reason or another but it is nice that you say so!! Hi there from Turkey!

Thanks! Yep, I'll admit when something doesn't go right. I figure if Julia Child will admit to mistakes, I should, too!