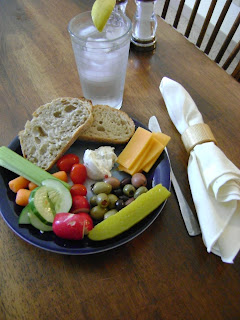 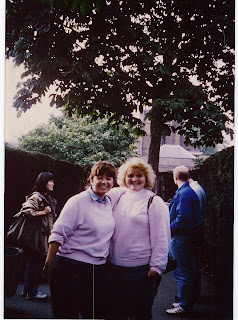 My friend, Barbie, and I spent five weeks exploring all of the traditional sites—Tower of London, Buckingham Palace, Windsor Castle, Westminster Abbey, British Museum, the Highlands of Scotland, the Welsh Folk Museum—well, just about everything! (Here we are at the center of the famous maze at Hampton Court.) 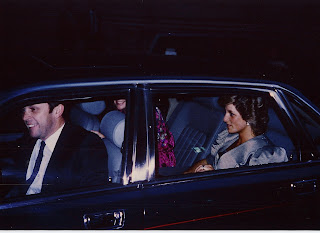 I even saw Princess Diana, Prince Edward, and the Duke and Duchess of (better known as Fergie.)

Perhaps my favorite places to explore were food related, from the large market in Harrods to the local food shops on the corner. When I returned to in 1992, this time with my friend, Tee, I reacquainted myself with some of my favorite products: 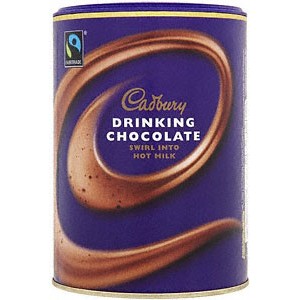 Digestive Biscuits (cookies that are tastier than the name suggests) 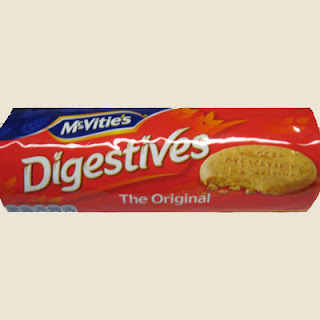 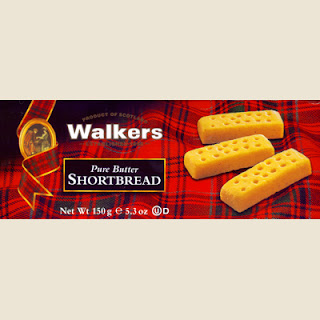 Thank goodness most of these are available here in the , either at grocery stores with good international sections, or shops like Brits in .
Somewhere along the way in 1987, Barbie and I made a stop at a pub for lunch. I don’t remember what town it was in, but I do remember ordering the ploughman’s lunch. I had read in numerous British guide books that this was a traditional lunch served, as you may guess, to ploughman when they took a break from their work in the fields. Turns out, it was actually created as an advertising gimmick for the country’s Milk Marketing Board in the 1960s to promote the consumption of cheese. However, there were references to the phrase in the Oxford English Dictionary in 1837, and a meal popular before World War II was called the ploughboy’s lunch, so perhaps the marketing people were just promoting a menu item that already existed in one form or another.  It’s a popular lunch order in today’s British pub. 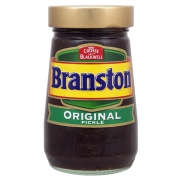 If I remember correctly, the ploughman’s lunch I ordered was fairly traditional—a piece of cheese, a thick slice of crusty bread, pickled onions, some fresh veggies, and Branston pickle (we would call it relish.)
The traditional beverage of choice was, of course, a pint of beer or cider. I think I drank Diet Coke. Really!
Ever since then, I have often enjoyed a ploughman’s style lunch. It’s quick, simple and tasty. It is also perfect for a hot summer day since no cooking is required and it takes advantage of the season’s fresh vegetables. 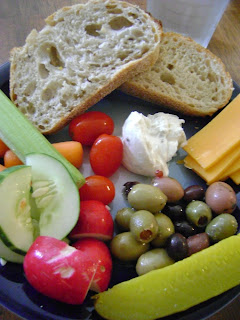 I just stick to the basics—cheese (in this case both cheddar and a garlic/onion cream cheese), crusty bread (this is a slice of Italian leftover from dinner the night before, and a 9-grain loaf slice), veggies from the farmer’s market, marinated olives from the same Italian dinner, and a dill pickle wedge. You can mix it up any way you like—just pick your favorites!
Too bad I didn't have any Toffee Crisps around for dessert. Oh well...
Posted by A Sunflower Life at 4:20:00 PM

Is there a difference between Toffee Crisps and Coffee Crisps? I'm assuming that, if there is a difference, it's blatant...lol. I can buy Coffee Crisps in Canada, as well as several other sweets (Aero, British KitKats, Malteasers, etc.) but not Toffee Crisps. And tea biscuits and digestives are easily available here, as well. Thank Cow for living a quarter-mile from British Columbia. Loved reliving the memory of a fab trip with you...love you muchly! xoxoxo

I'm not sure if there's a difference. Toffee Crisps are by Nestle, and they are chocolate covered caramel and crunchy bits. Sometimes I can find them, and the other candy bars you mention, in my local grocery store! We sure had fun over there, didn't we?! Love you muchly, too!

My husband and I spent a year in London and I have such fond memories of the Ploughman's platters in the pubs. Your post reminded me that for years afterward we would re-create those lunches for ourselves, complete with the Branston Pickle, when we could fin it! Love seeing it again, and now I will have to go out and find some Cheshire cheese, and make us up a plate!
Glad you'll be joining us for the 50 Women Game Changers posts.

Sue, I can't wait to get started on the 50 Women challenge! I love the idea of posting recipes from the 50 most important women in the food world.

Linda, This is awesome! You sure made me nostalgic. I'm pushing 50 and I can honestly say the five weeks you and I spent together in England still ranks at the top of the most amazing experiences of my life! I remember so many food "experiences": crying over the spicy pizza at Pizza Hut. We were sure it was safe to or der that pizza since English food was suppose to be bland, not realizing the waiter had probably overheard our somewhat rude commentary. It was only after our mouths were on fire that we noticed on closer inspection a tremendous number of jalapeno pepper seeds on our pizza. I also treasure the memories of enjoying afternoon tea on fine english bone china and eating till we were stuffed full of scones and clotted cream; buying warm bread from the baker in Willesden; getting inexpensive meals at "The Stockpot" restaurant in London; splurging on champagne truffles at Harrods and let's not forget "Wimpy" burgers! -- Barbie

Barbie, You just reminded me of so many of our experiences that I'd forgotten! What fun we had! I still talk about our trip to this day, and I've shared some of the pictures and trinkets I brought back with my preschoolers when we talked about England and Scotland last year!

The last time I was in London it was just 7 hours in the airport on my way to Greece, but we are able to get many Britsih ingredients at specialty stores here in my home town. I grew up on a Ploughmans Lunch!!!

Thank goodness for modern specialty stores and grocery stores where you can get so many great foods from so far away!