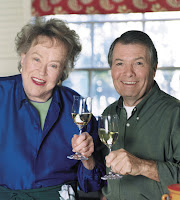 I am a television gourmet. Just about everything I know about cooking came from watching TV. Culinary shows send me straight to the kitchen in search of my chef’s knife and whisk, and made me the cook I am today. I guess this implies that I spend too much time in front of the television. 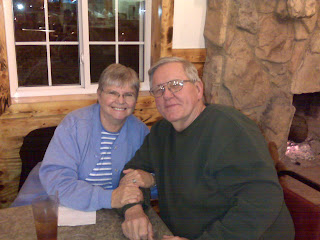 Actually, my fascination with cooking programs is a direct result of my mother’s aversion for the culinary arts. In other words, she hates to cook. There are some great recipes in her repertoire, including sugar cookies that are much requested at Christmas, and a rich vegetable soup that will warm any winter day. Mom taught me how to sift ingredients for Tollhouse cookies and acted as my consultant while, at ten years of age, I fixed my first pot roast. Still, if a dish isn’t quick and simple, she doesn’t want to deal with it. And since Dad retired a few years ago, she doesn't have to deal with it. He loves to cook! That must be where I get my love of cooking. 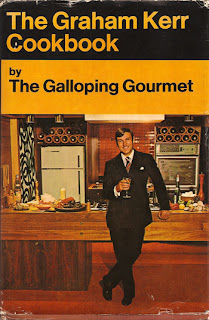 On the other hand, Mom is the one who introduced me to my first television cooking show. Anytime I was home sick from school we would watch The Galloping Gourmet while eating Mom’s potato soup (which was actually just cubed potatoes in warm milk with a little onion, butter, salt, and pepper.) Thanks to Graham Kerr I was probably one of the few elementary students who could clarify butter. I had never seen kitchen skills like Kerr’s—chopping, dicing, and flambéing his way through a dish, with a knife in one hand and a wine glass in the other. A recipe for Otaki Potatoes that mom copied from the show is still a family favorite. The sauce is so delectable that I use bread to clean the plate of every drop.

During middle school I discovered Julia Child on PBS. I am not afraid to prepare even the most complicated dish thanks to Child’s easy-going attitude about food. If a recipe doesn’t come out the way I planned, c’est la vie. Child taught me the basic skills that are necessary to allow me to explore recipes variation on my own. And I will be forever grateful to Child for providing the formula to roast a chicken to perfection every time.

Child’s cooking reminded me of maternal grandmother. Mamaw, as I called her, ran a farmhouse kitchen that was the heart of her home. Dinner was at noontime, eaten while listening to the news, weather, farm prices, and Paul Harvey on the radio. These were large meals of meat, boiled potatoes, gravy, and home-canned vegetables. Best of all was Mamaw’s chocolate meringue pie, made completely from scratch—crust, filling, and the light fluffy meringue. All this from a woman who, like Mom, hated to cook. Mamaw gladly gave up her utensils when she moved to a retirement home. I acquired her recipe file, which is one of my most cherished possessions.

The next television chef to contribute to my education in the finer points of good food was Jeff Smith, the Frugal Gourmet. By now I had graduated from college and was in the work force. I considered Smith’s program a must see each Saturday morning on the local PBS channel. The shows introduced me to the history behind a recipe, particularly his Cooks American series, and taught me about the different cultures that make our country, and its cuisine, so diverse. Most of the dishes were down-home, peasant food, much like the ones made by my father’s mother.

Grandma enjoyed cooking for her large family (my father is the oldest of six children.) All of her dishes were country food—fried chicken and pork chops, buttery mashed potatoes, fresh green beans cooked with bacon, and numerous pies. I remember watching Grandma make homemade noodles that were so coated in flour that the chicken broth they boiled in became thick, rich gravy. The mere thought of that dish makes my mouth water. Now that Grandma is gone, the recipe is gone too, since she kept it all in her head. However, my sister challenged me one Thanksgiving to try to recreate the dish--and I did!

My romance with TV food shows blossomed in adulthood. I fell head-over-heals for Jacques Pépin. There is something incredibly sexy about a man who speaks English with a French accent and who can cook, too. Pépin taught me the importance of those brown bits stuck to the bottom of the roasting pan to making a good sauce. Plus, I never throw out an old piece of fruit without contemplating some last possible uses, be it as juice, cut up in and added to a flavored gelatin, or baked into a fruit cobbler.

Another TV chef crush I have is Jamie Oliver. You just know that anyone who calls himself The Naked Chef will be fun to watch. I enjoy his high energy way of throwing ingredients together into a simple, easy dish with at least one unique flavor weaving along my taste buds. Oliver’s fruit cobbler might remind you of your grandmother’s, but the addition of balsamic vinegar adds a new dimension of flavor. Pukka. I also like the way he is fighting to bring healthy foods to our schools.

Lately, thanks to the Cooking Channel and a DVR, I can't get enough of watching Nigella Lawson. I love how she makes no excuses for her love of food. Of course, being a true anglophile, I also like her use of British ingredients and techniques. She can also make just about any dish sound sexy!

For someone who never wanted to captain a fine restaurant, my television has been the next best thing to culinary school. Here is the original Galloping Gourmet recipe for you to try in your own kitchen. Enjoy. It's delicious!