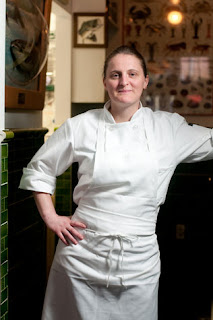 One of the things I enjoy most about participating with my fellow food bloggers in the weekly Friday posts of the Gourmet Live 50 WomenGame-Changers is discovering a new chef. This week’s selection, April Bloomfield, was new to me. A native of , she is the owner and chef of the Spotted Pig, a gastropub in ’s . In 2005, she received a surprise Michelin star in ’s first Michelin Guide.


Before landing in , worked in the kitchens of some well-known restaurants, including two I’m dying to try: River Café in and Chez Panisse in .


The reviews I read of her food at the Spotted Pig call it a mix of English and Italian. The recipes I read sounded more French to me. Perhaps that proves more than ever that food is the one thing that crosses all cultural borders. 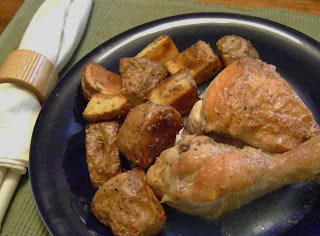 I came across this recipe for chicken with a vinegar sauce the day after I saw Laura Calder make a similar dish on her Cooking Channel show, French Food at Home. I thought it sounded easy and intriguing: How could that much vinegar make a good sauce?

When I first tasted the sauce before serving, I thought I’d made a huge mistake. It was awful! The sauce was very tart—too tart—and the flavor wasn’t enjoyable. Just about when I was ready to throw it all into the trash, I thought, “Maybe the sauce tastes better when eaten with the chicken.” 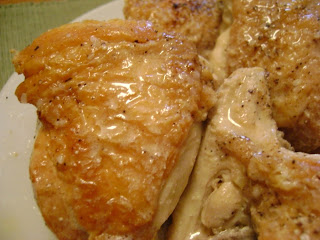 It does! In fact, the chicken’s flavor is enhanced by the sauce so much I kept dipping bites into it before eating. Don’t ask me how it works, but it does! Even my food-picky husband liked it. [Note: recommends serving the dish with herbed steamed rice. I chose roasted potatoes.]


Even if you don't make the sauce, this recipe is a great way to roast chicken. But without the sauce it would be a bit bland. Try it for yourself and let me know what you think. 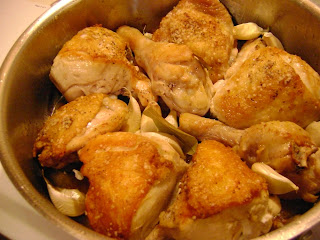 
Add the chicken stock to the skillet and boil, scraping up the browned bits, until reduced to 1 1/4 cups, about 10 minutes. Whisk in the crème fraîche and the remaining 2 tablespoons of butter. Return the chicken to the skillet along with any accumulated juices. Simmer over moderately high heat, basting a few times, until the sauce thickens slightly and the chicken is heated through, about 3 minutes. Season with salt and pepper and serve with the Herbed Steamed Rice.


Be sure to check out my fellow food bloggers to see what they prepared to honor April Bloomfield: 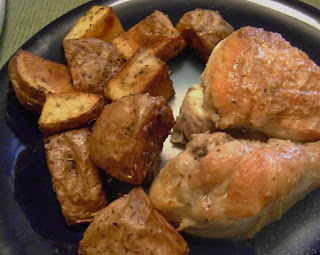 April definitely loves her vinegar don't you think? You picked a wonderful recipe to showcase. Next time I roast a chicken I many have to try this. Thanks for sharing it with us.

Wasn't this chicken good? I made the same this week and was pleasantly surprised by how the sauce actually tasted mellower than expected and went perfectly with the chicken.

You were very brave for trying this dish with all that vinegar in it. Sometimes you just have to have faith.

Your chicken looks delicious! I would really enjoy this recipe! Nice post!

I was very surprised how good this dish turned out. I think I'll try it again but with a different vinegar to see how it alters the taste.

I'm so glad you tried it before tossing it. Sometimes we just need to keep the faith when trying new dishes, especially when from such accomplished chefs! I've seen recipes for chicken in vinegar in the past; with your post I think I'm now ready to try one.