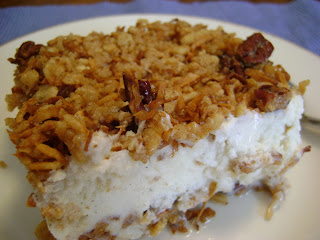 It's hot here in . As I type this, the little Weather Channel icon on my computer tells me it’s 104 outside. The grass is dry and crunching under foot and many farmers are facing the real possibility of crop failure from too much heat and not enough rain. And I know there are a lot of you around the country that are feeling our pain with your own hot-weather battle. 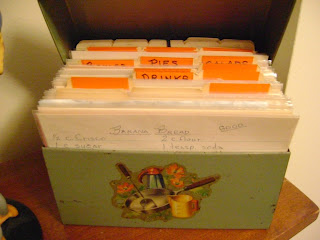 As I was looking through Mamaw’s box of farmhouse recipes for one to share with you, I was thinking of something cool. And nothing gets much cooler than ice cream! Mamaw got this recipe from Velma Drake, the mother of my Great-Aunt Mabel, on . (I always called her Grandma Drake, even though she wasn’t my grandmother.) The recipe’s name was simply “Dessert.” I decided to call it Snap Crackle Crunch Ice Cream because of the feel and sound that the topping/crust makes with its toasted Rice Krispies, pecans, and coconut. 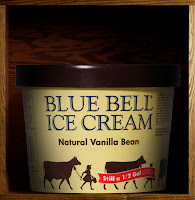 There was just one trick with this recipe. The ingredients listed a 1/2 gallon of ice cream, which was the common measurement for an ice cream container back in 1961. However, that’s not so in 2012. Most are now 1/2 quart less. I used Blue Bell Natural Vanilla Bean Ice Cream not only because it tastes great, but also because, as it says on the container, it still comes in a 1/2 gallon size. (And no, they didn’t pay me to say that. I just like it!)


I enjoyed this dessert with its creamy center and crunchy top and bottom. Next time I may try a different ice cream flavor, such as cinnamon, cherry, blueberry, chocolate… 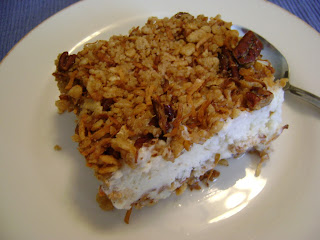 Oh, for the record, The Picky Eater tasted this dish and gave it the thumbs up! Yipee!


Place the first four ingredients in a 9- by 13-inch baking dish and place in the oven for 30 minutes, stirring occasionally. Remove from oven and stir in the brown sugar. Let sit for 10 minutes to cool a bit. 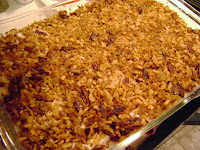 
To cut, dip a knife into very hot water, and then wipe off with a towel before cutting to make the job easier.
Posted by A Sunflower Life at 4:56:00 PM

I'd be very happy if this was in my house!!

Where was this recipe when I needed it last weekend? We just toured the Blue Bell facility and I blogged about it including a somewhat lame ice cream pie recipe. This is much more interesting and love the hand me down history that comes with it. The drought is so concerning. My husband manages the family farm near Hutch ... glad we took out crop insurance.

OH. MY. GOODNESS! Thank you for sharing this! Can't wait to make this!

The author has written an excellent article. You have made your point and there is not much to argue about. Engineers auto insurance discount