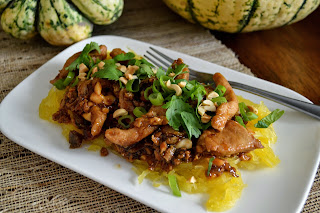 Recently I confessed my lack of enthusiasm for winter squashes. However, I am intrigued by spaghetti squash. I love how the solid flesh turns into strings after cooking. Kids think it’s magic!

Spaghetti squash is a tasty substitute for pasta or noodles. In the past, I've served it with homemade marinara sauce over the top. This time, I wanted to try something with an Asian flair.

The resulting Pad Thai recipe was delectable. The flavors were a perfect balance of savory and slightly sweet, and blended well with the spaghetti squash. I made the dish for dinner one night and enjoyed the leftovers for lunch the next day.

One note: The recipe calls for bean sprouts, which I love in Pad Thai recipes. However, on the day I wanted to make this dish I couldn't find any in the grocery store. So I made it without the sprouts, and it was still terrific. So put them in or leave them out. It’s up to you. 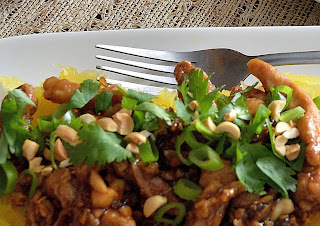 To prepare the squash, preheat the oven to 375 degrees F. Cut the squash lengthwise into two halves. (Be careful, since the skin is tough.) Scrape out the seeds (I do this with an ice cream scoop) and place the squash halves cut side up onto a baking sheet. Brush each halve with 1 to 2 tablespoons of oil. Bake for 50 to 60 minutes, or until a fork easily goes into the flesh. Remove from the oven and allow the squash to cool until it can be handled. Using a fork, scrape the squash flesh into strands and place in a bowl. Set aside.

To make the sauce, whisk together in a small bowl the lime juice, water, brown sugar, oyster sauce, 3 tablespoons oil, rice vinegar, and cayenne pepper. Set aside.
Heat 2 tablespoons of oil in a large skillet over medium-high heat. Saute the chicken until browned. Remove from the skillet onto a plate and set aside.
Reduce the heat to medium, and add 2 more tablespoons of oil to the skillet. Add the shallots, garlic, and a pinch of salt, and saute until the shallots are a light golden brown. (This happens quickly.) Pour in the beaten eggs and scramble until just done (this also happens quickly.) Add the chicken back to the skillet, along with any juices that accumulated on the plate. Stir in the sauce, bean sprouts, and half the scallions and peanuts. Allow the mixture to simmer for 2 to 4 minutes so the sauce can thicken a bit.
To serve, divide the spaghetti squash between four plates. Spoon the chicken mixture on top of the squash. Sprinkle the remaining peanuts, scallions, and the cilantro leaves over the top.