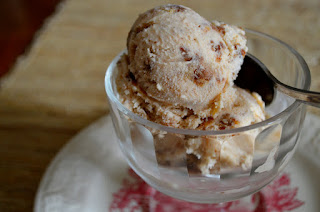 Is it just me, or are we being inundated by everything pumpkin? Television commercials, social media posts, and magazine pages are full of pumpkin-spice everywhere. Don’t get me wrong. I like pumpkin. But what happened to apples? It is apple season, too. Why not save the pumpkins until later and enjoy apples now while they're crisp and fresh from the tree.

Okay, that is my food rant for today. Thank you for listening. 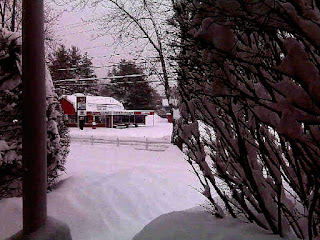 Apple season always brings back memories of apple crisp ice cream from Arnie’s Place in I lived in an apartment right across the street from this ice cream/hamburger/ barbecue spot open seasonally from February to October. (This photo is from the window in my old apartment...in March! Only in New England are you eating ice cream in the sunshine one day and shoveling snow the next.)

Most of the time, my ice cream choice was the Extreme Chocolate, which lived up to it’s name and was so rich I could only enjoy one scoop at a time. However, when autumn approach, I switched to the apple crisp ice cream full of bits from the classic dessert. 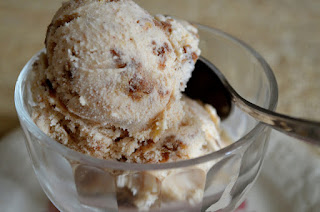 Since I now live too far away to enjoy Arnie’s ice cream, I decided to try making it myself. While I researched the recipe, I remembered the jug of apple cider I had in the refrigerator. Could I add apple cider to up the flavor of the ice cream?

Also, I like a lot of apple crisp in my ice cream, so I used the entire amount. However, one of my tasters thought there was too much. So add as much or as little as you like to fit your taste.

For me, Apple Cider Crisp Ice Cream is a perfect transition dessert as we move from summer’s heat to autumn’s chill. 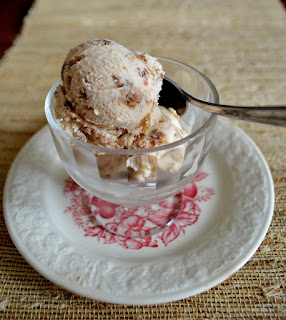 To make the ice cream base: Pour the apple cider into a sauce pan. Bring to a boil over medium-high heat and continue to boil until the cider reduces to 1/4 cup, about 25 minutes. Set aside to cool.

Pour the milk and sugar into another saucepan. Stir over medium heat only until the sugar is dissolved, just two minutes or so. Pour the milk/sugar mixture into a bowl. Whisk in the vanilla, cinnamon, nutmeg, and cider reduction. Then stir in the cream. Cover and chill in the refrigerator for at least 2 hours, or overnight.

To make the crisp: Preheat the oven to 350 degrees F. Butter the bottom and sides of a 8 or 9-inch cake or pie pan.

Place all of the ingredients except the apples into a medium bowl. Cut in the cold butter with a pastry cutter or two knives, or squish the cold butter bits into the other ingredient with your fingers, until well combined.

Place the diced apples into the bottom of the buttered pan and cover with the oatmeal/butter mixture. Bake until the topping is golden brown and the apples are soft, 45 to 55 minutes. Remove from the oven and allow to cool.

This ice cream looks soooo good! i love it! I do love apples. We go apple picking in early Oct every year and then I go apple recipe crazy! It's a big thing here in NY.

This sounds amazing. It is a make ahead dessert. I'll plan this for the next gathering of the family. Thanks for stopping by Tumbleweed Contessa. Drop by again soon.