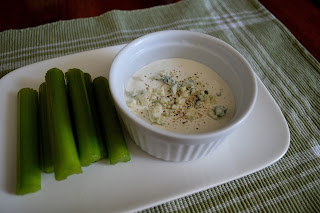 Last night I gathered with a few friends and fellow fantasy football league members to watch the first game of the NFL season featuring the New England Patriots playing the Pittsburgh Steelers.

My brother-in-law, Don, wore his Steelers jersey. I wore my Patriots 2014 Super Bowl champs t-shirt. I went home happier than he did, though he was pretty psyched about Steelers wide receiver Antonio Brown’s performance since he racked up a lot of points on Don’s fantasy team.

FYI: I’m a Kansas City Chiefs fan by birth, and always will be. However, I’m a Patriots fan by choice. They won me over during my years living in , especially while making their run to the 2001 championship. I admired how they chose to come out as a team instead of highlighting individual players during pre-game introductions. To me, that is what the game of football should be all about—playing as a team. 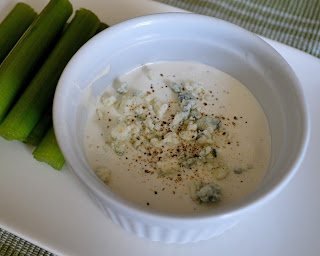 Of course, I had to make my Buffalo Wings for the game. To go with them, I decided to try homemade blue cheese dressing, after which I asked myself, “Why haven’t I done this sooner?!”

Blue cheese dressing is so easy to make. This one was a big hit. Even my nine-year-old nephew sat next to me, munching on hot wings and celery coated in the stuff and asking me to spoon more on his plate. He kept pointing to it and saying, in between mouthfuls, “That’s good.”

One note about the photos: I remembered to set aside some of the dressing and celery to use in the pictures. Unfortunately I forgot to save some of the Buffalo wings, which were devoured last night.

This dressing is great as a celery dip, too. I can’t wait to try it on a salad, with extra blue cheese crumbles on top. 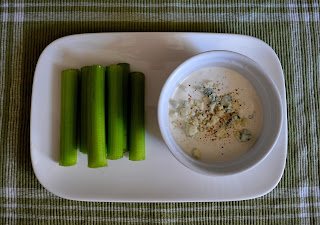 In a bowl, whisk together the sour cream, mayonnaise, whole milk, vinegar and Worcestershire sauce until smooth. Stir in the blue cheese crumbles. Add salt and pepper to taste. Chill for at least 1 hour before serving.