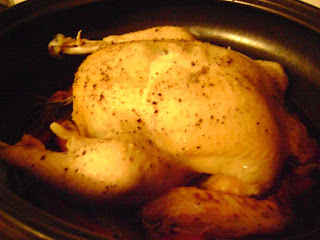 Ever since I discovered the David’s Herbs stand at the farmers market sells free-range whole chickens, I have craved a lovely roasted bird. A chicken in the oven surrounded by potatoes and carrots is perhaps one of my favorite meals. I love the aroma that fills the house as the bird becomes brown and succulent while the vegetables are infused by its flavor. Oh my. 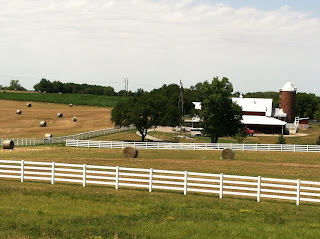 Unfortunately is going through a long streak of 100-plus degree days this summer. Even with air conditioning, I try to avoid turning on the oven for any length of time except early in the morning or late in the evening, which doesn't work for our dinner schedule.


Slow cooker to the rescue! I put the chicken inside and 8 hours later had a lovely fall-off-the-bone roasted bird. 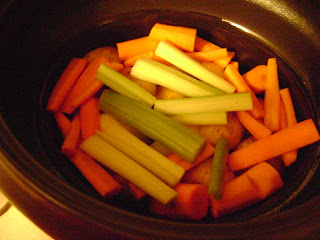 When I told the man who sold me the chicken (David? I’ll have to ask.) that I planned to roast it in a Crock-Pot, he suggested crumbling up balls of foil to put under the bird, which will keep it out of the juices and allow it to roast instead of stew. It’s a great idea, but since I planned on cooking vegetables with the bird, I decided to use them to hold the chicken out of the broth below. 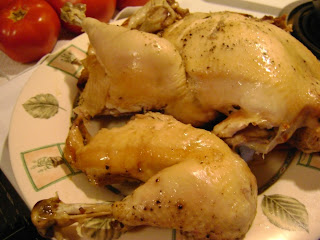 The only difference between an oven-roasted and Crock-Pot roasted chicken is the latter doesn’t have a brown, crispy skin. I considered browning it in a hot skillet, which would give the skin color, but decided it was the meat inside that counted. If you want brown skin, give this a try. However, it will not be crisp after hours of slow cooking.

My oven-roasted bird is also basted in butter to get that brown, crispy skin, so the slow cooker way of roasting is lower in fat. And after I removed the bird and vegetables, I had a lovely broth left over. 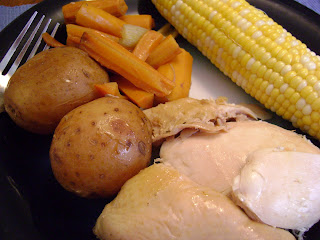 The chicken was moist and savory and the vegetables were full of flavor. The Picky Eater loved the dinner. After he cleaned his plate, he said, “I could eat this every night.”


In the slow cooker, place the vegetables in the bottom, saving an onion wedge for the chicken. Sprinkle with salt and pepper and scatter fresh thyme stems on top. Pour in the water. 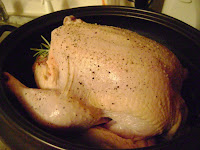 
Place the chicken on top of the vegetables. Cover and cook on low for 8 to 10 hours, or until the meat reaches a temperature of at least 165 degrees.
Posted by A Sunflower Life at 9:59:00 AM

You just cannot beat a roast chicken. Good idea to use the slow cooker to keep the heat down in the house. I tend to discard the skin anyway so a lack of crispy skin just removes the temptation and the herb infused meat would more than make up.

LOL Hi Sweetheart! Readers, The Picky Eater is my wonderful husband, Michael, who is a big fan of my cooking...most of the time. ;)Thanks, Sweetie, for all of your support!

I wouldn't have thought a slow cooker could be used to roast a chicken. Good to know!

Oh, that chicken looks sooo good, and served with potatoes and corn, mmm, I want to be at that dinner table! :)

It took me the longest time to finally give in to "roasting" a chicken in the slow cooker but once I did, I was hooked. I'll take that lovely stock in lieu of the crispy fat any day! And so will my waist:)

I think it's adorable that the "Picky Eater" is so supportive. Very cute:)

Would this be the closest thing to a rotisserie chicken without having a rotisserie cooker? Or can you suggest a different recipe?